What about the roads to democracy and justice? 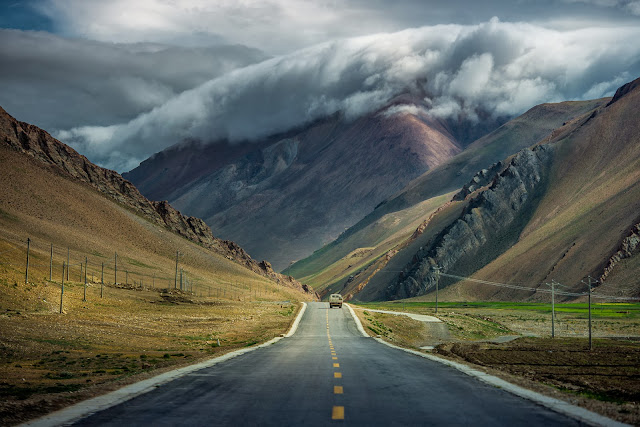 In an earlier posting, I mentioned that China would soon expand its Tibetan railway line to the southern city of Shigatse. The bridge over the Yarlung Tsangpo (Brahmaputra), near Shigatse was completed in September.
Xinhua then reported: “Along with the 32-meter-long T-shaped beam which was put slowly on the pier of the No.1 grand bridge of Lhasa-Shigatse railway over the Yarlung Tsangpo River by the bridge layer, the track-laying of the Lhasa-Shigatse railway has spanned the Yarlung Zangbo River for the first time.”
In a recent Rediff article, ('India should take a lesson from what China thinks and does'), I quote some Arunachali friends saying "For roads and infrastructure, the Chinese are very much in advance on us".
It is a fact that basic infrastructure (roads, airports, railway, etc.) is far more developed in Tibet than in the Indian Himalayas.
Another example, yesterday Xinhua announced that the world's highest wind farm at 4,700 meters has gone into operation in Nagchu prefecture.
The Chinese news agency says that the five turbines of the first phase have a capacity of 7.5 megawatts. The completed project will have 33 wind turbines capable of putting out 49.5 megawatts.
That is good, but at the same time, China (and particularly Tibet) is very socially backward, especially as far as governance is concerned.
Does Beijing realize that this undermines its 'peaceful raise'?
The Study Times, the magazine of the Chinese Communist Party Central Party School, recently discussed how to resolve the social conflicts recurrently occurring in China. Many watchers believe that in the years to come, it will be Beijing's problem no 1 to solve.
The magazine categorizes the social conflicts into six types: conflicts caused by differences in income, conflicts caused by misaligned policies, conflicts caused by growing 'social anxiety', conflicts caused by a lack of proper administrative control over the Internet, conflicts caused by the abuse of government power, and conflicts caused by incomplete reforms.
The author conveniently forgets to mention conflicts due to regional aspirations (in Tibet and Xinjiang for example), but he offers some suggestions for solving the other conflicts:
However today, not only the Communist Party is not ready to 'rely' on the People, but 'improving Internet administration', clearly means more and more policing of what the people say, think, dream, control over their aspirations, their genuine problems and this, by using the 'latest technologies'.
In this field, India is decades ahead of China.
China which pretends to be a 'great power' has no clue about what the UN Declaration of Human Rights means.
Take the example of Nelson Mandela's funerals, Xinhua headlined: “Mandela, Mao shared similarities"; it quoted some declarations supposedly made by the South African ambassador to China.
But while Mandela's Nobel Peace Prize was the symbol of national reconciliation and a reward for the steps he took to lead his country towards democracy, Mao's dictatorial tendencies translated into his infamous Great Proletarian Cultural Revolution and his Great Leap Forward which was responsible for widespread starvation: the latest academic estimates of the consequences of Mao's follies are put at some 45 million deaths.
Though the exact words of the South African Ambassador are not known, how to compare the anti-apartheid leader with Mao, who colonized more than half of what is today the Peoples' Republic of China and killed tens of millions of Chinese (and Tibetans).
Today, it is under China's pressure that the Dalai Lama was twice denied a visa to South Africa.
At the same time, The Global Times slammed the comparisons between the Chinese Nobel Peace laureate, Liu Xiabao and Nelson Mandela.
The South China Morning Post wrote: "In the wake of Mandela's death last week, some Western commentators and Chinese social media users have criticized Beijing for praising the former South African leader a while cracking down on its own dissidents, such as Liu [Xiaobo]. Some commentators have also noted similarities between the two Nobel Peace Prize winners, who were both jailed for their political activism, but The Global Times dismissed the correlation, saying the West is using Liu's case to defy China's judicial sovereignty and smear its human rights record".
In an editorial, The Global Times praised Mandela's "struggles, tolerance and efforts to bridge differences" while calling Liu "a Chinese prisoner who confronted authorities and was rejected by mainstream Chinese society."
Roads and railway lines are good and China should be praised for it, but the roads (and why not the train) to Democracy, Justice or Equality, are also important if China is one day to become a 'great power'.
The Middle Kingdom is far, far behind in this field and its new leadership does not seem to have the will to remedy this.It is a tragedy.

Total road mileage nearly doubles in Tibet
China Tibet Online
December 10, 2013
The total road mileage in Tibet nearly doubled from 35,583 kilometers to 65,176 kilometers from 2002 to 2012, People.com reported.
The total mileage of new and renovated road in Tibet reached 39,157 kilometers during this period.
Transportation in Tibet developed quickly in the recent decade with a hefty investment of 53 billion yuan (8 billion US dollars), among which 10 billion yuan was invested in 2012, the largest amount of its kind, said Tashi Gyatso, head of Tibet Transportation Department.
"Besides the increase of total mileage, the grades also get higher," he added.
The improving transportation infrastructures help to boom local economic development.
Posted by Claude Arpi at 7:49 AM