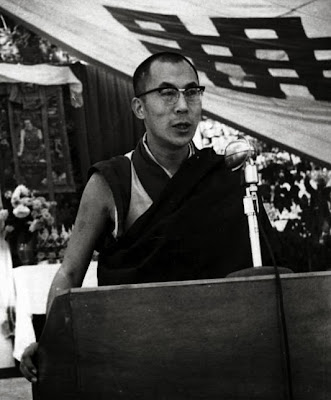 I am posting today an interesting historical document which appeared in the Selected Works of Jawaharlal Nehru (Part II - Volume 49, May 1 - June 30, 1959).
It is a telegram, sent on May 10, 1959 by Prime Minister (and Foreign Minister) Jawaharlal Nehru to G. Parthasarathi (GP), the Indian Ambassador to China.
The telegram describes India's 'China Policy', hardly 6 weeks after the Dalai Lama had crossed the Indian border in Tawang District of Arunachal Pradesh (then the Kameng Frontier Division of the North East Frontier Agency).
One thing is quite surprising is that Nehru does not seem to realize the Indian common men's strong sentiments for the Tibetans after the Dalai Lama was forced to leave his homeland to take refuge in India.
Nehru tells GP that the Opposition is making noise and 'saying hard things about China chiefly to embarrass our Government', this is not correct.
Three years later, when China entered into India's territory in NEFA and Ladakh, Nehru realized the cultural and strategic importance of Tibet; but was then it was too late.
In 1959 in India, there was a genuine feeling for the cause of the Tibetans; but Nehru only saw "some kind of anti-China propaganda will be carried on by some opposition parties and individuals, chiefly as an attack on our Government."
It is not necessary to comment on the Indian Communists leaders' attitude; they were obviously unable to bite the hand(s) which fed them.
Nehru uses strong words to criticize the forthcoming All India Convention on Tibet (to be held in Calcutta on May 30-31, 1959 and presided over by Jayaprakash Narayan).
On May 8, three weeks before the Conference, Nehru told the Parliament (see all the 1959 debates on Tibet on my website):


I have not heard of it except today. In fact, just when I came, I heard something about it. Whatever I have seen till now and whatever that convention appears to aim at or whatever it seems to represent, to me it seems to be very wrong. It is a wrong approach, an approach which will do no good to anybody at all, and may do a good deal of harm if really it was the approach of any responsible people in India. For, we must realise first of all one common thing.What do we want? What are we aiming at? How can we get there? What can we do about it?
I take it that we are sad, we are distressed at events in Tibet. Why are we distressed? Presumably because we feel that a certain people are being sat upon, are being oppressed. Whether those certain people, according to Shri S.A. Dange [founding member of the Communist Party of India], are feudal landlords or some people like that or according to others, they are common people of Tibet. Whatever it may be, there it is. I have no doubt in my mind that it is difficult to draw the line in such cases between the top feudal elements and others. They all can be mixed together. And as a result, for the moment, they are all uprooted.
Now, where a society has existed for hundred and hundreds of years-it may have outlasted its utility but the fact of their uprooting is a terribly painful process. It can be uprooted slowly, it can be changed even with rapidity, but with a measure of co-operation. But any kind of a forcible uprooting of that must necessarily be painful, whether it is a good society or a bad society. If we have to deal with such societies anywhere in the world, which as a social group may be called primitive, it is not an easy matter on how to deal with it.
All these difficult things are happening. They should have happened; they would have happened, may be a little more slowly but with a greater measure of co-operation, because only such a change can take place effectively and with least harm to those people concerned. They may be helped by others, may be advised by others. Every good thing that is done by imposition becomes a bad thing.

Was Tibet a primitive society?
Had it outlasted its utility?
Had the 1959 events really 'to happen'?
Certainly not.
Nehru seems to say that the Tibetans needed to be 'uprooted'. Fifty-four years later, China is still in the process of uprooting the Tibetans, and India's policy of Nehru has not changed much.
Nehru admits that his Government's attitude has been 'much more moderate than Indian public opinion demanded'.
The fact that 'the presence of the Dalai Lama and thousands of refugees in India is a continuing affront to the Chinese Government' remains today correct.
But it is not up to China to create the conditions to solve the issue?
It was probably true that, in the first few weeks of his exile, the Dalai Lama had  'not fully appreciate the situation' and 'imagined that [India] can issue demands and bring pressure on the Chinese Government'.
Nehru says: "I am trying to explain to him that this does not fit in with the facts of life."
There are of course, different perceptions about 'facts of life', particularly on such an issue.
It is not necessary to comment on 'the impression here [where?] that Mao Tse-Tung [Zedong] is a man of wisdom'.
The Great Leap Forward (which resulted in 40 or 50 millions deaths) was then going on full swing in China.
The man-made carnage was the consequence of the agricultural and industrial policies of the 'man of wisdom'; indeed, one of the saddest chapter of China's history.

Your telegrams 87  and 88  of May 7th and 8th.
I agree with your analysis of the situation. We have broadly followed the policy you indicate. It must be remembered, even though the Chinese do not appreciate it that there are many parties in India functioning with complete freedom and every Opposition Party, except the Communist  in this case, are bent on saying hard things about China chiefly to embarrass our Government. During the last few weeks, frequent questions have been asked in Parliament and various motions made. Because of the abundance of these questions and motion, I have made one or two statements.
[Commenting on the CPI's stand on Tibet, Ajoy Ghosh, the General Secretary of the CPI, said in his interview in New Delhi on 5 May that it was an "integral affair" of China, with which India had close and friendly relations. He asked the Indian Government to look upon the issue as a purely "domestic affair" and demanded that India should not make any observation which might be interpreted in "sympathy" or "support" for the Tibetan rebels. See The Times of India, 6 May 1959].

2. Parliament has now adjourned for three months. There will thus be no further speeches in Parliament. I imagine also that the press here will tone down. But I think that some kind of anti-China propaganda will be carried on by some opposition parties and individuals, chiefly as an attack on our Government. I understand that some kind of a convention is being held in Calcutta for this purpose.  We have disassociated ourselves from it and disapproved of it. I made this clear in my speech in the Lok Sabha yesterday.

3. Generally speaking, the attitude taken up by our Government and my speeches have been much more moderate than Indian public opinion demanded.
The Congress Working Committee has passed a resolution which is more or less restrained. [The CWC resolution, drafted on 8 May, and published on 10 May, said: "The Working Committee accords its full support to the policy of the Government of India as enunciated in the Prime Minister's statements in Parliament and to the granting, on humanitarian grounds, of asylum to Dalai Lama and the refugees from Tibet."]

4. We do not, therefore, intend to carry on a controversy. But we cannot stop odd individuals or groups delivering objectionable speeches.

5. It is clear that there is a basic difference in our approach and that of China and that we use same words and phrases but with different meanings.
We realise, however, that any kind of controversy will do no good to Tibet or to us. At the same time, we shall adhere to our basic position even though the Chinese do not like it. As you say, the presence of the Dalai Lama and thousands of refugees in India is a continuing affront to the Chinese Government.

6. It might be kept in mind that the publication of maps in China showing large parts of North-East India as Chinese territory, has been a constant irritant to India, whatever the reasons the Chine se may give for it. There is widespread feeling here that the Chinese Government often act as a bully, India for all her moderation and restraint, has also a good deal of pride and self-respect.

7. Anyhow, so far as we are concerned, we shall let matters remain as they are and leave the next step to the Chinese. I do not expect any such step to come soon. Meanwhile, the Dalai Lama, not fully appreciating the situation, imagines that we can issue demands and bring pressure on the Chine se Government. I am trying to explain to him that this does not fit in with the facts of life.

8. It is worth noting that the Soviet Union and other Communist countries have on the whole been silent about Tibet. This does not mean any love of Tibet. Probably it indicates their feeling that China has gone too far. Also, to some extent, their friendly relations with us lead to some restraint. As for other countries, in Asia or Europe, they have become more anti-China than before. Thus as a result of Chinese action in Tibet, there is a certain isolation of China in regard to world opinion. I realise that in the present mood of China, this has no great effect. Nevertheless, it cannot be ignored.

9. We have no authentic news about happenings in Tibet and elsewhere. But I rather doubt if it will be easy for the Chinese to put an end quickly to the hostile elements in Tibet. Vague reports reach us also of trouble elsewhere.

10. There is an impression here that Mao Tse-Tung being a man of wisdom, had exercised a restraining influence, but his influence has been waning since his "hundred flowers" speech , and more aggressive people have come to the front. Progressively Mao has been pushed aside from major seats of authority.
Posted by Claude Arpi at 6:34 AM