China Military Online reported yesterday that: "A wartime river-crossing support drill organized by an engineer regiment under the Tibet Military Command (MC) of the Chinese People's Liberation Army (PLA) was conducted on August 8, 2013 in the waters of the Yarlung Tsangpo River."
Let not forget that the Yarlung Tsangpo becomes the Siang river when it enters in India and later the Brahmaputra.
The Chinese website adds: "During the drill, the officers and men of the regiment conducted the drill on pontoon bridge erection with new-type heavy pontoon bridge equipment. It is learnt that the new-type heavy pontoon bridge equipment adopts modular configuration and its structure can change at any time. For example, equipped with a powered rear-boat, a raft of pontoon can be used for ferrying and connected rafts of pontoon can become a floating bridge. With a great load capacity, the new-type box-type raft of pontoon can ferry heavy weaponry and equipment across great rivers." 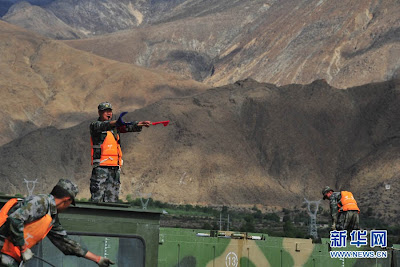 It is the first time to my knowledge that the PLA has used such sophisticated means to built a pontoon on the Tibetan plateau.
The Military website explains: "Besides, the new-type heavy pontoon bridge uses electronic control means, thus its degree of mechanization and automation improved significantly. It can effectively solve problems arising from accurate positioning and docking by means of satellite navigation and positioning and fast connection of nano-anchor steel."
There is no doubt that it is a serious development.
Some pictures where posted on Xinhua website. 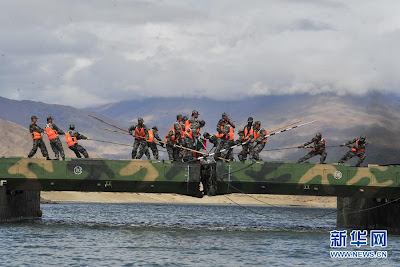 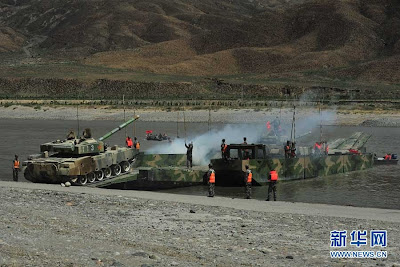 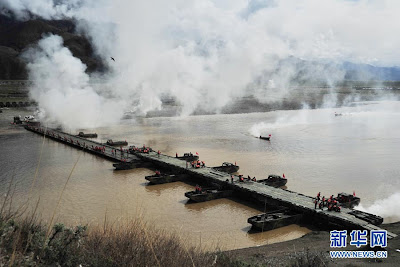 But that is not all.
The Tibetan Autonomous Region is on the way to develop the largest ever mountain road network which could be qualified of 'multipurpose'.
One the uses is what The Disneyland of Snows mentioned elsewhere.
In order to bring millions of tourists, good roads are a must.
As mentioned in my posting on Yu Zhengsheng's visit to Lhasa, the development of region is another must.
And from the PLA point of view, this infrastructure has an important military purpose.
China Tibet Online says: "The recent years witness a breakthrough in the transportation of southwest China's Tibet Autonomous Region. With roads at various levels having extended in all directions, local Tibetans needn't worry about transportation any more." 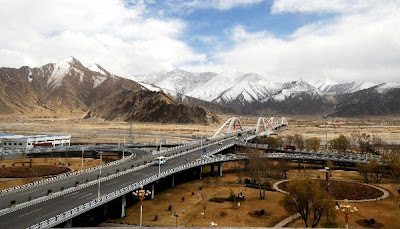 The Chinese website elaborates: "Due to the high altitude of the plateau, roads in Tibet are called 'the sky road' by Tibetans affectionately to express their appreciation for improving their traveling conditions under such terrible constructing circumstance on the world roof."
According to Chinese statistics, the total length of roads built in Tibet had reached 65,200 kilometers; it includes roads at the national level, provincial level, county-level, as well as roads connecting different townships and villages.
All the seven prefectures in Tibet are linked by a good road network,
Some 60 counties out of 74, 400 townships out of 693, and 4,280 villages out of 5,454 have a road connection.
China Tibet Online affirms that the transportation infrastructure investment in Tibet has been over 9.7 billions yuan (about 1.58 billion US dollars): "And the amount of newly built and rebuilt roads in the past decade [only] exceeds the sum total of that in the previous 50 years since the Peaceful Liberation of Tibet (i.e. the occupation). 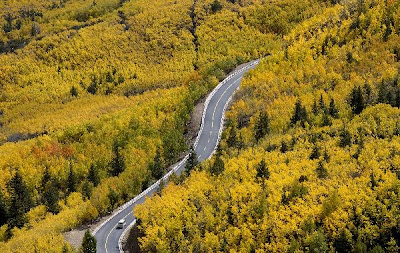 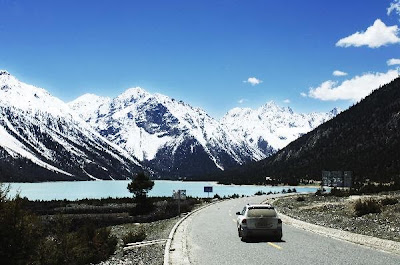 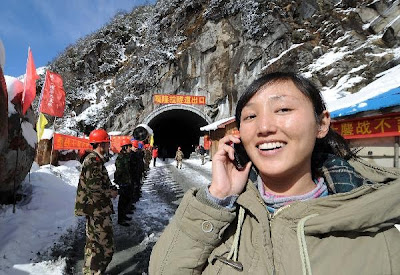 Another Chinese article announces that according to the latest statistics of the Development and Reform Commission (Planning Commission) of Nyingtri (Nyingchi) Prefecture bordering Arunachal Pradesh, the area has witnessed a great deal of development and key projects are progressing well.
Is it not worrying for India which progresses at snail pace in Arunachal Pradesh.
The Chinese article states: "154 projects have been in full resumption and 17 have already completed. There are 95 new projects including 64 which have started and 7 which have completed. From January to June of 2013, altogether 2.128 billion yuan (about 347.7 million U.S. dollars) are invested in the key projects of Nyingchi Prefecture with year-on-year growth of 115 percent. Among the investment, 1.305 billion yuan (about 213.2 million U.S. dollars) are allocated to the continued projects, and 823 million yuan (about 134.5 million U.S. dollars) are attributed to the new projects." 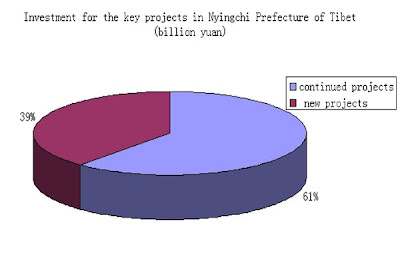 The nature of these projects is however not mentioned.
Is it only road construction, new dams or improvement of the Nyingchi airport?
Let us not forget that the military township of Bayi also comes under the same prefecture.
The article however says: "In the document of The 12th Five-Year Plan of Supporting Tibet's Economic and Social Development Construction Project Planning released by the State Council of China, 129 projects in Nyingchi Prefecture are involved and 38.93 billion yuan (about 6.4 billion U.S. dollars) will be totally invested during 2011 and 2015, including 26.15 billion yuan (about 4.3 billion U.S, dollars) of planning investment."
Some 1.3 billion U.S. dollars has already been spent, in other words 30 percent of the total planned investment.
One understands why Weng Mengyong, the Chinese Vice Minister of Transport and Du Ying, the Vice Minister of the National Development and Reform Commission accompanied Yu Zhengsheng during his recent inspection tour in Tibet.
Posted by Claude Arpi at 5:03 PM