Another Political Vase for Tibet?

A few days ago, Wang Zhengwei, the head of the State Ethnic Affairs Commission (SEAC) and a Vice-chairman of the Chinese People's Political Consultative Conference (CPPCC) stated that “support [is] needed to develop Xinjiang and Tibet”.
At that time, the Chinese press said that the announcement was made “at a meeting on relevant work”; in Communist jargon, it means "it is not your business to know".
It now turns out that Wang was in Tibet where he declared: “Safeguarding ethnic unity and stability in Xinjiang and Tibet is important to China's national unity and border defense."
He also called on “relevant authorities to provide more help to the two regions and make them more capable of handling emergencies, cracking down on separatists and safeguarding ethnic stability.”
According to Wang, State Ethnic Affairs Commission which functions under the State Council [Cabibet] has raised some 486 million U.S. dollars in the past three years for Xinjiang and Tibet.
Wang clarified that the money was used “mainly to improve housing, the environment, water and electricity supplies, as well as the protection of ethnic relics in the regions.”
The main objectives of the commission were education, improving people's well-being and win local support: “local ethnic affairs authorities must go deep into the grassroots and listen to their needs in areas like education, medical care and employment”.
Wang did not mention the role of the Commission Tibet for ‘safeguarding’ China's national unity and ‘cracking down on separatists and safeguarding ethnic stability’. 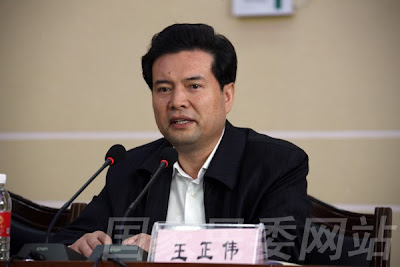 But who is Wang?
Wang Zhengwei is born in 1957 in Tongxin County of Ningxia Hui Autonomous Region. He is a Hui by ‘nationality’ and joined the CCP in 1981 after graduating from Chinese Department of Ningxia University with a Bachelor Degree in 1982. He later earned a Doctorate degree from Central University for Nationalities in 2003.
He has been a member of the 16th, 17th and 18th CCP’s Central Committees. In 2008, he became Chairman of the People's Government of the Ningxia Hui Autonomous Region, a Muslim dominated area of northwestern China.
In April 2013, Wang was nominated Minister of the State Ethnic Affairs Commission.
The South China Morning Post (SCPC) consecrated an article to the new ‘minority’ boss, warning “China's new ethnic affairs commissioner has little power”, adding that experts believe that “the appointment of Hui Muslim as head of the State Council's ethnic affairs body will do little to ease the country's ethnic tensions,” though the appointment of a Hui Muslim as head of the State Council's ethnic affairs body may seem strategic.”
Wang Zhengwei replaced Yang Jing (a Mongol) who made it to the top, the Politburo.
Wang is the youngest vice-chairman of the Chinese People's Political Consultative Conference (CPPCC).
Ilhan Tohti, an ethnic Uygur and a Central University for Nationalities economics professor told the SCMP that the Commission "has had the lowest political impact among the 25 departments under the State Council since [the Commission] was set up in 1949, no matter what official rankings its heads have held".
Thoti explained: “As an ethnic Hui from Ningxia, Wang might be more familiar with Uygurs, but he can't influence China's ethnic policy because the role of CPPCC is just a 'political vase' [for display].”
Another scholar, Jiang Zhaoyong, a Beijing-based expert on ethnic issues, asserted: “It's a fact that Wang can't do anything to influence our country's ethnic affairs. In Xinjiang, all ethnic issues are decided by the party's Political and Legal Affairs Commission, while the United Front Work Department controls Tibetan policies."
That was under the ancient regime. Things seem to be changing and Jiang may be wrong.
When Politburo’s Standing Committee member Yu Zhengsheng (and head of the Xinjiang Coordination Small Group) visited Xinjiang between May 23 and 28, he was accompanied by Wang.
The SCMP named Wang as the deputy chairman of the CPPCC and chief of staff of the coordination group, (in other words, ‘secretary of the Xinjiang Coordination Small Group). According to the Hong Kong newspaper: “This is the first time that a CPPCC chairman has headed the Xinjiang Coordination [Small] Group and a deputy [vice] CPPCC chairman has fill the chief of staff role.”
The previous Small Group had two heads of the group, Luo Gan and Zhou Yongkang, both leaders were part of the Party's Political and Legal Affairs Committee and members of the all-powerful Politburo Standing Committee.
The Xinjiang Coordination Small Group was set up in 2003 on the pattern of other Small Groups under the Central Committee of the CCP. It is supposed to facilitate policy coordination between the Central and Xinjiang governments, dealing amongst things over finance, development and education.

Wang's visit to Lhasa
His visit to the Tibetan Autonomous Region from August 11 to 16 tends to show that Wang Zhengwei has become a member of the Tibet Work Small Group.
However only the Chinese language papers reported his visit to Tibet.
Wang came from Chengdu, Sichuan where he met with Sichuan provincial officials in the Ethnic & Religious Affairs Department. He also visited the Southwest Nationalities University in Chengdu.
Like Yu Zhengsheng to weeks earlier, his presence in Tibet was announced only after he had left the Tibetan capital.
The most interesting part of his visit was the Nyingtri Prefecture, north of the McMahon Line (he may have flown from Chengdu to Nyingtri airport).
Wang spent four days visiting monasteries (in Bayi), some urban police posts, and several villages, including a Lhoba village in Miling County and a 'tourist' village in Lulang Township.
More interestingly, Wang convened a meeting of a new group working under the SEAC; this group is called “National Ethnic Affairs Commission Assistance Partnership for Tibet and Xinjiang Work Committee”.
A few senior Xinjiang leaders, Han and Uighur were even flown to Nyingtri to attend the meeting. 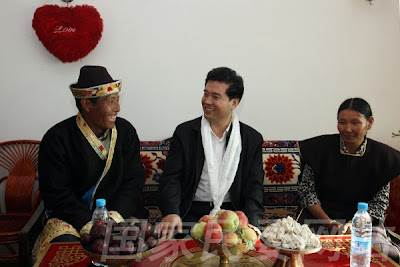 The purpose of this new group is not known.
Wang arrived in Lhasa on August 15 where he listened to the reports of Party Secretary Chen Quanguo, Deputy Party Secretaries Padma Choling and Deng Xiaogang, Gongbo Tashi (head of the TAR United Front Department), Chodak (Party Secretary of Lhasa), Ding Yexian (TAR Executive Vice Governor) and Wang Ruilian (TAR Standing Committee Secretary General).
In Lhasa, Wang visited the Jokhang Temple, the Lhasa Mosque and the Potala Palace. Wang told the monks” “You must draw a clear line between yourselves and the 14th Dalai Lama group.” Wang like Yu before him called on the two ‘senior’ leaders Phakpalha and Ragdi. Apparently Jampa Phuntsog was not around.
Wang was accompanied by Sithar of the United Front Department (he was also present during Yu Zhengsheng’s visit to Lhasa and Nagchu earlier this month) and Luo Li, a Deputy Director of the State Ethnic Affairs Commission.
What to make out Wang’s visit to Tibet?
It was apparently only reported in the local press. We will have to wait and see if it was a private initiative of Wang and his Ethnic Commission or if he is going to take the lead under Yu Zhengsheng to bring new blood to the Small Group on Tibet.
Qui vivra verra!
Posted by Claude Arpi at 4:12 PM