Glimpses on the History of Tibet 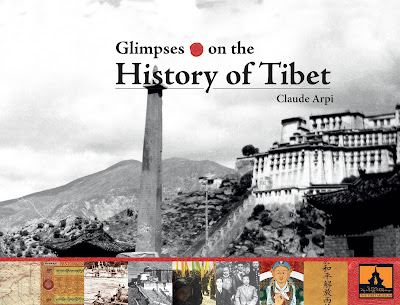 Here is a review of my illustrated book Glimpses on the History of Tibet published by the Tibet Museum in Dharamsala.

I was there at the very beginning, the beginning of creation, so to speak. For the winter of 2009, I took my family to Auroville, a community which is guided by the way of life inspired by Sri Aurobindo, an Indian nationalist leader and mystic who based himself in the French enclave of Pondicherry in south India to escape harassment of the British Raj.
Our time spent in this truly international city coincided with His Holiness the Dalai Lama inaugurating the Pavilion of Tibetan Culture. As its name implies, the Pavilion of Tibetan Culture is a centre devoted to the study of Tibetan culture, the pet project of Claude Arpi, a lover of Tibetan culture and an expert on everything Tibet and the politics that engulf the country.
According to Claude Arpi, after speaking to young Tibetans about Tibet’s past, His Holiness the Dalai Lama requested him to capture the entire history of Tibet in a comprehensive slide presentation.
He wanted the French Tibet scholar to do 25 panels with succinct explanations about their background. His Holiness the Dalai Lama hoped that this would inspire young Tibetans and others to delve more deeply into Tibetan history for them to better understand and take pride in the past of the Tibetan people.
Claude Arpi said that perhaps to give him strength and to bless him on this arduous journey into Tibetan history, His Holiness the Dalai Lama presented him with two thangkas of Shantarakshita and Guru Padmasambhava, two Indian Buddhist masters most responsible for planting firm roots of Buddhism in Tibet and the three religious kings who made sure that this happened in their realm.
After a year or so, Claude Arpi said he had completed the project and forwarded the slide presentation, called Glimpses of Tibetan History, to the Department of Information and International Relations (DIIR).
The DIIR’s Tibet Museum converted the 25 slides into 3 by 6 foot panels which constitute an important part of the Museum’s exhibition on Tibet.
Now this exhibition has been transformed by the Tibet Museum of the DIIR into a stunning coffee table book.
Apart from the introduction, like the exhibition, the book is divided into 25 sections. The book edition of Glimpses of Tibetan History takes the reader right to the beginning of the formation of the Tibetan Plateau, more than 20 million years ago.
Or, according to Claude Arpi, 100 million years ago when India decided to migrate from Africa to Asia. India’s eventual departure from Africa and its coupling with Asia took about 71 million years. The resulting collision between India and Asia, in the words of Sven Hedin, the legendary Swedish explorer and scholar, threw up the most stupendous upheaval on the face of the earth. Today that upheaval is known as Tibet, or the Roof of the World, the source of life-giving waters to the rest of Asia.
Like the exhibition, Claude Arpi’s book, Glimpses of Tibetan History is an ode to the sanctity of Tibet. While reading the book, one can almost hear Claude Arpi singing hymns in praise of Tibet from ancient India’s Puranas:


As the dew is dried up by the morning sun,
So are the sins of men dried up by the sight of the Himalaya,
Where Shiva lives and where the Ganga falls
From the foot of Vishnu like
The slender thread of a lotus flower.
There are no mountains like the Himalaya,
For in them are Kailas and Manasarovar.

Or, one can hear Claude Arpi declaiming from Kalidas:


In the northern quarter is divine Himalaya,
The lord of mountains,
Reaching from Eastern to Western Oceans,
Firm as rod to measure the earth.

Like ancient India, ancient Tibet had the same reverence for its sacred geography. The ancient Tibetans celebrated the arrival of their first king, Nyatri Tsenpo, the Neck-enthroned one, around 127 BC, with these words. These verses re-produced below are a Tibetan celebration of the enthronement of their first king and the sanctity of the realm he came to rule.


He came as lord of the six parts of Tibet,
And when he first came to this world,
He came as lord of all under heaven.
This centre of heaven,
This core of the earth,
This heart of the world,
Fenced round by the snow,
The headland of all the rivers,
Where the mountains are high and the land is pure.

The author taking his readers on a bird’s-eye-view journey over the ups and downs of Tibetan history, starting from an examination of the scattered, archaeological remains of Tibet’s Paleolithic and Neolithic Ages, is a remarkable achievement.
With the author we look at the tentative beginnings of Yarlung dynasty that flourished in the Yarlung valley which scholars consider to be the cradle of Tibetan civilization. The kings of the Yarlung dynasty came to dominate stronger and well-established earlier kingdoms like Shangshung in western Tibet, the centre of Tibet’s Bon religion. The Yarlung kings soon over-ran the whole of the Tibetan plateau, laying the foundations of the empire and the civilization that bound the Tibetan people.
The ancient Tibetans’ empire-building enterprise was accompanied by absorbing the cultural influences they encountered when they broke out of the confines of the plateau. The biggest influence was that of Buddhism which Tibetans transmitted to Tibet over the course of five centuries. Along with incorporation of Buddhism, the ancient Tibetans invented a script, developed a medical system and devised a calendar, which made Tibetan civilization wholesome and complete.
The best minds of ancient and medieval Tibet engaged in this mighty cultural enterprise took talent and energy away from Tibet’s empire and nation-building effort. The empire the Tibetan kings constructed fragmented into pieces. With no central authority, Tibet became easy prey for outside predators. The biggest was the Mongols who in exchange for Tibetan allegiance left Tibet a self-governing administration within the rapidly expanding Mongol empire. With the Mongols, the Tibetans developed the priest-patron relationship, a unique form of diplomacy among the Tibetans, Mongols and the Manchus.
Claude Arpi then takes the readers through the rise of the Gelug school of Tibetan Buddhism and the assumption of political authority by the great Fifth Dalai Lama. Later, there was increasing Qosot Mongol and Manchu interference in the politics of Tibet, which China today says are the grounds for its claims on Tibet. However, on this issue Claude Arpi cites Huc and Gabet, two French missionaries who visited Tibet at the time, as saying, “The Government of Tibet resembles that of the Pope and the position occupied by the Chinese ambassador was the same as that of the Austrian ambassador at Rome.”
The following sections deal with the Gorkha, Zorawar Singh’s and British India’s invasion of Tibet, taking the readers to the turn of the 20th century to 1904. The 13th Dalai Lama, in touch with the modern world through his two exile experiences in Mongolia, China and then in British India, made strenuous efforts to modernize Tibet. He established a police force in Lhasa, sent young Tibetans to be educated in England, started a modern standing army, laid a telegraphs line between Lhasa and India, built a modern mint, established a new English school in Gyantse and improved monastic discipline.
The great 13th Dalai Lama also made serious efforts for Tibet to be admitted to the League of Nations, the predecessor to today’s United Nations. But all these efforts proved too little, too late.
In 1950, a re-unified and resurgent communist simply overwhelmed Tibet through force and diplomacy.
This is the story Claude Arpi tells with great insight and erudition. Glimpses of the History of Tibet should be read by all Tibetan school children.
Posted by Claude Arpi at 6:24 AM