Has China used nuclear devices on the Brahmaputra?

A Times of India's blog has reported a strange piece of news. Citing a classified Indian intelligence source, it says that China 'surreptitiously conducted three to four 'low yield atomic explosions' in Tibet in March 2005' to clear the mountainous terrain 'to divert the Yarlung Tsangpo river'.
Though the information is certainly incorrect as the purported diversion of the Brahmaputra is planned far upstream on the Brahmaputra/Tsangpo and not in the Great Bent, it is however important to stop a minute on the information.
In the early 2000s, I look into the issue and I wrote:


The project [to divert the Brahmaputra] was reported in the Scientific American in June 1996. This article giving credence to the Chinese plans. The journal wrote: “Recently some Chinese engineers proposed diverting water into this arid area [Gobi Desert] from the mighty Brahmaputra River, which skirts China’s southern border before dipping into India and Bangladesh. Such a feat would be ‘impossible’ with conventional methods, engineers stated at a meeting held last December at the Chinese Academy of Engineering Physics in Beijing. But they added that “we can certainly accomplish this project” with nuclear explosives.”
The US journal continued: “This statement is just one of the many lately in which Chinese technologists and officials have touted the potential of nuclear blasts for carrying out non-military goals.”
At that time, it was said that one of the reasons for China’s refusal to sign the Comprehensive Test Ban Treaty (CTBT) was because their desire to keep the possibility of experimenting with what is called PNE (Peaceful Nuclear Explosion). The Chinese argument was “why should promising and potentially useful technology be abandoned.”

The diversion was first reported in the Indian Press in June 1997 when Outlook magazine wrote a piece entitled: “A river runs through it — China proposes to divert the Brahmaputra at source to green the arid Gobi desert.”
The Delhi magazine said: “The initial report — that the Chinese were planning to raise their food output in the decades ahead — was hardly stop-press material. But as details leaked out, policymakers in India and Bangladesh felt a shiver of apprehension: the Chinese proposed to divert the Brahmaputra river at source, in Tibet, even set off a peaceful nuclear explosion, to serve their purpose .”
Outlook also revealed that “the concern in Assam and Bangladesh is understandable. The Luit - as the river [Brahmaputra] is locally called - figures prominently in the folklore and culture of Assam and the Northeast; has been the theme of countless Bhupen Hazarika songs. The river is crucial to the economy of the entire region, where the concept of irrigation through groundwater sources has not really taken off.”
In the coming months, more publicity was given to the dam as well as the diversion proposals. In September 1997, Agence France Press in Beijing  reported: "Three experts propose construction of giant dam in Tibet". It stated: "After a long experience of exploration on the site, we believe that the project could begin to be included in the agenda of the concerned department”. Electricity produced was claimed to be: “available for export to Bangladesh, Burma and India and the diverted water could irrigate the northwestern deserts of the country".
The project was also mentioned in news briefs in the China Daily Business Weekly (21 September 1997) and the International Water Power & Dam Construction Monthly (November 1997).
In January 1998, , the German TV channel ZDF presented a feature on the Yarlung Tsangpo project, in a program entitled "Die Welt" [The World]. The Chief Planner, Professor Chen Chuanyu was interviewed. He described the plan to drill a 15 km (9.3 miles) tunnel through the Himalayas to divert the water before the U turn and direct it to the other end of the bend. This would shorten the distance of the approximately 3,000 meters altitude drop from 200 km to just 15 km. He explained that the hydropower potential of 40,000 megawatt could be used to pump water to Northwest China over 800 km away.
An interesting aspect that we have briefly mentioned is that this area known to the Tibetans as Pemakö (Metok) was considered to be a sacred area, rarely visited by outsiders. The difficulty of access to this unexplored region must have created one of the greatest obstacles for the engineers in Beijing. At the end of the 90’s, the Chinese government decided to permit foreigners to explore the Grand Canyon. The well-known National Geographic expedition, with ultra sophisticated materials and highly professional rafters made the first discoveries. Though it resulted in the death of an American kayaker, Doug Gordou in October 1998, it permitted a far greater knowledge in several previously unexplored parts of the gorges. Books and video footage of this expedition (as well as subsequent ones) certainly helped the Chinese planners to get a more accurate picture of the difficulty of the terrain (as well as the potentialities).
The opening of the area to adventure tourism was a first step to find an approach way for dam site.
In the recent years, the Chinese have been more discreet on the project, although a few reports have continued to come in.
The correspondent of The Telegraph in Beijing wrote in October 2000: “Chinese leaders are drawing up plans to use nuclear explosions, in breach of the international test-ban treaty, to blast a tunnel through the Himalayas for the world's biggest hydroelectric plant.”
The Telegraph warned: “China will have to overcome fierce opposition from neighbouring countries who fear that the scheme could endanger the lives and livelihoods of millions of their people. Critics say that those living downstream would be at the mercy of Chinese dam officials who would be able to flood them or withhold their water supply.”
According to the London paper, the cost of drilling the tunnel through Mt Namcha Barwa appears likely to surpass £10 billion. The article gives further details: “At the bottom of the tunnel, the water will flow into a new reservoir and then be diverted along more than 500 miles of the Tibetan plateau to the vast, arid areas of Xinjiang region and Gansu province. Beijing wants to use large quantities of the plentiful waters of the south-west to top up the Yellow River basin and assuage mounting discontent over water shortages in 600 cities in northern China.”
Later the project to have the 'diversion' from the Great Bent was abandoned and some other plans were made to start the diversion from the Yarlung Valley, south of Lhasa. Read my article The Madness of Guo Kai.
If the 'diversion' project is still kept on the computers of a few mad people in Beijing, a tunnel (for a road) has been opened between the Valley of the Tsangpo and the Metok country.
Was it a 'symbol' that it was inaugurated the day Premier Wen Jiabao arrived in Delhi in December 2010. I have often written on the Metok tunnel and more recently, Latest news on the Brahmaputra.
Has China used small nuclear devices to open the tunnel?
It is improbable, because the Chinese engineers have mastered the conventional tunnel technology.
They may have used it to prepare the ground for the first dam (Zangmu) on the Brahmaputra upstream the Great Bent; it is surprising, but nothing is impossible.
In the meantime, China is planning to transform the area into one of the main tourist attractions of the Middle Kingdom. Millions of visitors will drop by every year. Even President Xi Jinping visited the Nyingtri Prefecture in July 2011; he liked it very much.
Did he smell the 'explosions'? 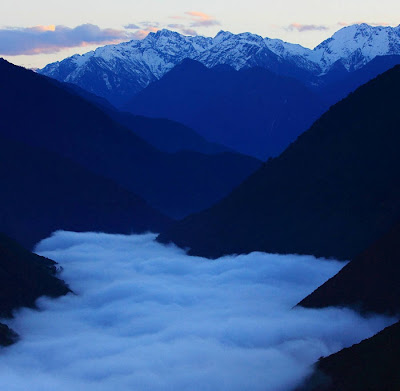 indiatimes.com Aug 29, citing classified Indian intelligence documents. China’s plans to conduct such explosions were widely reported around that time, but were never officially confirmed.
The report said the blasts were held at Moutou (Tibetan: Metog/Pemakoe) County and also near the Great Bend of the Brahmaputra, both in Lingzhi (Nyingtri) Prefecture, Tibet Autonomous Region. They were conducted at significant depths to avoid detection.
Although India did not make the information public, it did actively take up the matter with the Chinese authorities, including through its embassy in Beijing. China, however, flatly denied it.
In 2008, India’s National Security Council (NSC) shared the information with the United States during the visit of the latter’s defence secretary Mr Robert Gates, a former CIA director. And the US authorities admitted the complete failure of their satellites to detect the blasts.
Two factors were reported to have confirmed the Mar 2005 atomic blasts. Firstly, there was unprecedented flooding of the Brahmaputra in Jun-Jul 2005, which resulted in the rise of the river’s level by 30 metres on the Indian side. The Chinese engineers were suspected to have diverted the river water to facilitate their work. Secondly, Indian intelligence noticed in Oct 2008 that Chinese engineers had begun work through Tibet’s Galung La mountain in Nyingchi prefecture near the Great Bend of the Brahmaputra, confirming yet again that nuclear blasts had taken place there earlier.
The report said India was skeptical about China’s steadfast claim that all the dams on the Yarlung Tsangpo were only run-of-the-river projects. In particular, India fears that its share of Brahmaputra’s waters would be reduced and that China could use it as a weapon to cause heavy damage to the Indian side by releasing water at any time it wished.
Posted by Claude Arpi at 6:56 AM

It is impossible to hide any nuke explosion these days with all the sophisticated technology available with US & other developed countries.
The monitoring stations at Kunming would surely catch any such activity. Even cold testing can be detected.

I feel this is among the most significant info for me.
And i'm satisfied reading your article. However should statement on some normal things,
The site taste is wonderful, the articles is in point of fact excellent : D.