You may remember that when Yu Zhengsheng visited Amdo region (Qinghai Province) beginning of July, he called "for lasting prosperity and stability in China's Tibetan regions by improving local livelihoods and fighting the 14th Dalai Lama clique."
Yu visited the famous Labrang Monastery, 'one of the six great temples of the Geluk school of Tibetan Buddhism' according to Xinhua.
Yu was received there by the traditional head of the monastery, the Jamyang Shepa.
I then wrote: “It is clear that the Chinese are keen to use the traditional hierarchy to put across their message.”
But their main message, as we have seen during Yu’s visit to Lhasa and Nagchu in early August, is ‘development’ through ‘tourism’.
On August 19, Xinhua reported the arrival of a A319 passenger plane from Sichuan Airlines which “marked the opening of the Xiahe Airport of Gannan [Kan-lho] Tibetan Autonomous Prefecture, the first civil aviation airport built in ethnic [Tibetan] areas of Gansu Province as well as the only plateau airport at an elevation of 3,198 meters in Gansu.” 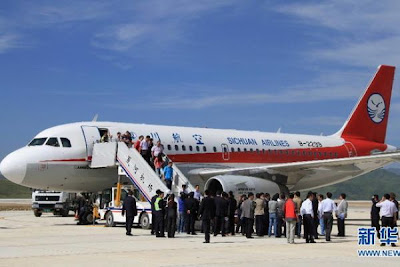 Labrang monastery is located close by and the new airport will help develop tourism in the area.
But to receive hundreds of thousands visitors, the famous Buddhist center needs ‘renovations’, like the Bakhor area in Lhasa.
Three days after the opening of the airport, Xinhua announced that the facelift of the monastery is proceeding smoothly: “Renovations to a centuries-old Tibetan monastery in northwest China's Gansu Province will be finished by the end of August.”
Xinhua quoted Sonam Je, a deputy chief of the county's culture bureau saying: “Renovation of the Xiabudan [?] Buddha Hall of the Labrang Monastery in Gansu's Xiahe county is part of a first-phase facelift to the monastery, and the project will serve as preparation for bigger renovations in the future.”
Started year, the hall's renovation has already cost some 425,000 U.S. dollars. The first-phase of the project includes two other halls with an initial funding of 1.6 million U.S. dollars.
Later more than 10 other halls of Labrang Tashikyil monastery will eventually be renovated; they are on the ‘waiting list’ according to Xinhua, which further explains: “It is the religious center for more than 340,000 Tibetans in Gansu's Gannan [Kan-lho] Tibetan Autonomous Prefecture, one of China's 10 Tibetan autonomous prefectures.”
The local authorities explain that the monastery's mud and wood structure is in urgent need of reinforcement; there are some cracks in the walls and roofs are leaking. This affects the life of the 1,000 lamas living in Labrang.
Again according to local Chinese cadres, the monastery has a number of “heritage pieces, including over 30,000 Buddha statues, 65,000 volumes of Buddhist scriptures and a rich collection of sutras and murals.”
At a cost of some 27 million US dollars, Beijing finances the entire operation “to reinforce the heritage buildings without making alterations to their original appearance”.
Why?
Sonam Je let the cat out of the bag when he says: “Religious activities and tourism have not been affected by the renovation work.”
It is an investment which will be recovered in no time with the revenue from tourism.
Once the renovation work is completed Labrang will apply for World Heritage status; it will take in 7 to 8 years as “hasty renovations could ruin the 303-year-old monastery".
The authorities are not keen to repeat a Bakhor episode where hundred thousands of concerned people signed (to no avail) a petition to the UNESCO.
It practically means that Disneyfication of Tibet is extending its tentacles to the ‘Tibetan-inhabited’ regions of Amdo, before it reaches Eastern Kham at a later stage.
Before this, the ‘stabilization’ work will have to be completed; in other words, the restive Khampas will have to be ‘pacified’ one way or another.
It may take a few decades, if it ever happens.
Posted by Claude Arpi at 3:50 PM

"It is an investment which will be recovered in no time with the revenue from tourism."do you really think so?