Climate Change and the Train in Tibet 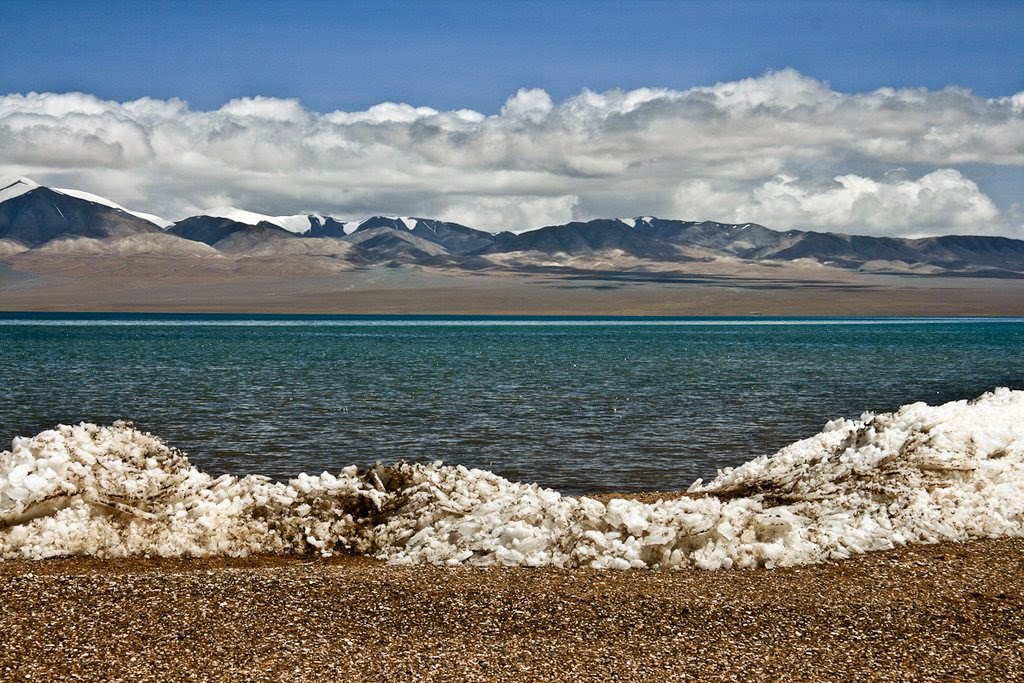 According to Xinhua, the railway line on the Tibetan plateau is in danger.
The reason is the over flowing of some lakes located close to the railway line in Qinghai province.
In March 2014, a scientific review had already reported the changes:


Based on topographic maps, Landsat TM/ETM+ images, China Environment and Hazards Monitoring and Prediction Satellite (HJ1A/B) CCD images and meteorological materials observed at Wudaoliang meteorological station, we explore the change causes of Kusai Lake using geographical information techniques and mathematical statistics method. The results show that water overflowing Kusai Lake occurred in September 20-30 in 2011, and the direct reason was the flood from Zhuonai [Zonak] Lake flowing into Kusai Lake.
In addition, Kusai Lake has been growing in recent decades; especially after 2006 it experienced a quick increase that formed the foundation of lake water overflow. The main factor resulting in the flood from Zhuonai Lake was the steady precipitation. Specifically, the heavy precipitation on August 17 and 21 made Zhuonai Lake water outflow on August 22, 2011; then continuous precipitation during August 31 to September 9, 16 and 17 subsequently formed a serious flood from September 14 to 21. Accordingly, there was a sudden drop in area of Zhuonai Lake. As of November 29, the lake decreased to 168.07 km2 (a reduction of by 104.88 km2), accounting for 62% of the area on August 22. The outflow water from Kusai Lake flowed into Haidingnuoer Lake, then into Yanhu Lake. The latter occurred during October 6-20. Due to sudden rapid flow, both Haidingnuoer and Yanhu lakes suffered a quick expansion from October to November, 2011.

This does not sounds good for the future of the railway line which also faces permafrost thawing problems.
In 2009, The Scientific American had warned: "Building a railway across the unstable soil of the Tibetan Plateau was an improbable endeavor from the start, but an army of Chinese government engineers did it anyway. Now, with the frozen soil disturbed by the process of laying down the rail and a warming climate on the plateau, some scientists question whether the $4-billion rail line will survive as is or require major reconstruction."

The website Meltdown in Tibet explains further: "Permafrost across the Tibetan plateau varies from frozen sub-surface soil to layers hundreds of metres underground. The Tibetan plateau comprises the largest sub-Arctic permafrost region on the planet. Frozen for millions of years, the permafrost is now in danger of thawing. It is not known how fast, but it is certain that permafrost thawing has been accelerated where human interference is a factor—such as the building of the railway line to Lhasa. By 'interference' here is meant the drilling of 7.6-metre-long steel tubes into the soil to act as 'cooling sticks', designed to refrigerate vulnerable parts of the soil along the railway tracks. These cooling sticks are filled with ammonia—to draw latent heat out of the soil."
Cooling sticks plus earthquake plus climate change, all this, is quite worrying.
Here is Xinhua's article:

Rising lake levels threaten to flood major railway line
June 14, 2014
Xinhua
Rising lakes in Qinghai province may affect the safety of the nearby high-elevation Qinghai-Tibet Railway, experts said, as they called for joint efforts between departments to prevent possible damage.
"The railway is now only 8 km from the Salt Lake in the Hoh Xil area of Qinghai, down from 12 km in September 2011," said Liu Baokang, an engineer from the Satellite Remote Sensing Center under the Meteorological Bureau of Qinghai province, on Friday.
The weather in the Qinghai-Tibetan Plateau is becoming wetter and hotter in summer, resulting in steadily increasing rainfall in July and August, according to provincial meteorological records.
The coming flood season will thus push the water level higher, possibly extending the Salt Lake closer to the major rail line, which links Xining, Qinghai province, and Lhasa, the Tibet autonomous region, he said.
In the Hoh Xil area in southwestern Qinghai, four inland lakes, including the Zonag Lake in the west and the Salt Lake in the east, were linked by flooding after a natural dam break of Zonag Lake in September 2011, an event that experts believe was triggered by two nearby earthquakes.
Due to the dam break, about 5 billion cubic meters of water, equal to 485 West Lakes in Hangzhou, Zhejiang province, were discharged from Zonag Lake, located in the higher western area, flowing to the two lakes nearby.
Flooding from the three lakes converged on the Salt Lake in the lower eastern area, quickly expanding its surface area from about 46 square km before the dam break in 2011 to around 142 sq km in 2014.
In addition to posing a possible danger to the railway, the expanding lake surface may create problems in telecommunications in the area.
"The Salt Lake contains a higher salt concentration, and the salty water could corrode the communication optical cables nearby," Liu said. The government needs to take action to avoid damage to the telecommunications and railway systems, he added.
Obtaining a more accurate analysis of the direction of the lake's expansion requires a map reference that can give the topographical situation of the lake and surrounding areas to within 20 meters. Such information is available only from the province's mapping bureau, Liu said.
"We urgently need to cooperate with the bureau to share the accurate topographic information in order to release the targeted measures," he said.
Zheng Jie, deputy head of Qinghai province's forestry department, said the government began to keep a closer eye on the increasing surface of the Salt Lake to protect the safety of the railway and other tunnels, China News Service reported.
A professional team conducted a field investigation and handed in a response report to the central government in 2013, the deputy head said.
But Liu said the experts did not agree on whether to rebuild the broken dam, and the authority has not taken any action.
Posted by Claude Arpi