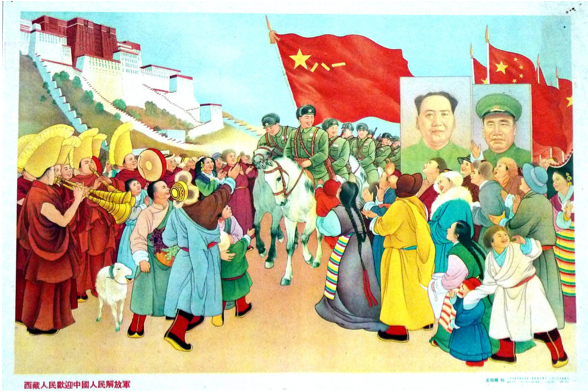 Cary Huang, a senior columnist of The South China Morning Post recently wrote: “China has a lot to celebrate in 2019, but it also has old wounds to heal.”
He believes that with its packed 2019 calendar of commemorative events, Beijing may ‘forget’ some of them, “many of which are politically charged or divisive. For a nation moving forward, it’s time to acknowledge the difficult past.”
But in Xi Jinping's China, who is ready to analyze the past?
Huang continues: “In 2019, China ushers in a year full of both festive jubilation and political trouble. Its communist leadership places enormous emphasis on the anniversaries of important historical events, though such politically significant dates might mean good or bad omens.”

The Serfs Emancipation Day
Huang gives the example of March 28; on that day, Beijing will commemorate the 60th anniversary of Serfs Emancipation Day.
But what is this 'emancipation'?
March 28, 1959 marks the end of the massacre of the Tibetan population in Lhasa and Beijing taking over control of the Tibetan capital; eighteen days earlier, the Dalai Lama had fled the Roof of the World to take refuge in India.
The Dalai Lama was sacked as chairman of the Preparatory Committee for the Tibet Autonomous Region and replaced by a (then) more pliant Panchen Lama.
Huang also notes that on April 15, Beijing may observe the 30th anniversary of the death of reformist party chief Hu Yaobang: “Hu was an advocate for Western-style democratic reform who helped steer China away from orthodox Marxism and Maoism, and his demise sparked student-led pro-democracy protests in 1989, which resulted in the military crackdown in Tienanmen Square on June 4.”
An Alzeimerish Communist Party is bound to have forgotten what happened on the Square after the demise of Hu Yaobang and the thousands who died in Lhasa.


The Uprising in Lhasa
To come back to the ‘emancipation’ of the Tibetans, in a previous post, I have related the events of March 1959.
I quoted from the “Report for the months of March, April and May 1959” sent by the Indian Consul General in Lhasa (Maj SL Chibber) to the Ministry of External Affairs in Delhi.
This Top Secret document was dated June 1, 1959.
I also mentioned other accounts of the events which led to a massacre in Lhasa (thousands lost their lives), culminating in the Emancipation Day.
I cited for example from a Kindle book The 1959 Tibetan Uprising Documents - The Chinese Army Documents published in 2018 which provided documents from the Military Intelligence of the People's Liberation Army on the 1959 bloody events.
Another account of the events was given by Jianglin Li in her Tibet in Agony, "the first clear historical account of the Chinese crackdown in Lhasa in 1959. Sifting facts from the distortions of propaganda and partisan politics, she reconstructs a chronology...”, says the preface of her book.

Today, I am posting another document of the events which led to the ‘Emancipation’.
It is an extract of the Annual Report of the Indian Trade Agent (ITA) in Gyantse for the Year 1959; RS Kapur, the ITA witnessed first-hand the tragic events from Gyantse.


1. The year 1959 will go down as the most important year in the history of Tibet. It marked an end to the way of life of the Tibetan people. The Dalai Lama, who felt that he could no longer function effectively, left his country with his Cabinet in March and took asylum in India. His departure was followed by a large number of people who could not see any future in their motherland.

2. With opposition out of the country Chinese got a free hand and they went all out to subjugate the country. People have been deprived of their movable and immovable property. Stock of grains in possession of the ‘Landlords’, middle class people and the monasteries have been taken over. The end of the year left the Tibetans entirely at the mercy of the Chinese.

3. While heart of Tibet was bleeding the free world only made speeches. With the end of the debate on Tibet in the United Nations, Tibetans lost all hopes of their survival, stare at the sky with the blank eyes and ask:

Buddha, they say, has disappeared from the world and [they] are fast losing hopes of survival of their race. From all appearance Tibet is finished.

This is the story of the Emancipation with Communist characteristics.
Posted by Claude Arpi at 6:46 AM