In 2019, why India must remain cautious of Chinese intentions 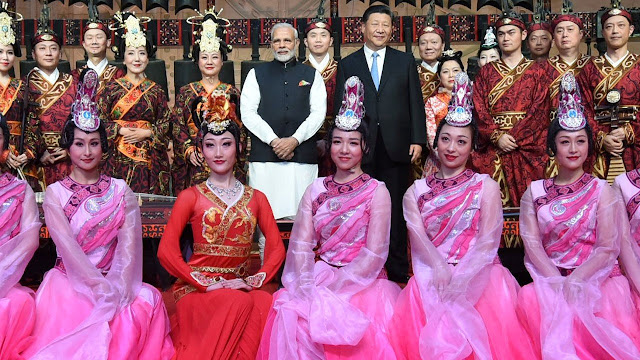 My article "In 2019, why India must remain cautious of Chinese intentions" appeared in Mail Today/DailyO

New Delhi can play the duet but has to be ready for the duel.

On December 21, China's State Councilor and Foreign Minister Wang Yi arrived in New Delhi for a four-day visit to India.

During his stay in Delhi, Wang reiterated that the Chinese ‘dragon’ and Indian ‘elephant’ “should join each other in a duet, not a duel.” He spoke of both countries ‘ushering in an Asian Century’; it was reminiscent of the Nehru-Zhou Enlai duo. Wang co-chaired the first-ever meeting of the China-India High-Level Mechanism on Cultural and People-to-People Exchanges with his Indian counterpart, Sushma Swaraj.

In an Oped in The Hindustan Times, Wang wrote: “China and India are each other's important neighbours and the world's two largest developing countries. Friendly exchanges and win-win cooperation between China and India will positively affect the evolution of a global landscape and human society.

The new 'bhai-bhai' atmosphere is the outcome of the ‘Wuhan consensus’; the informal Wuhan summit between President Xi Jinping and Prime Minister Narendra Modi in April which ‘left a deep imprint’ on bilateral relations. One can only rejoice about the new relaxed mood.
This, however, reminds me of the euphoria when India and China signed the Panchsheel Agreement on Tibet in 1954.

It is usually forgotten that less than two months after the accord was inked, the Chinese started trespassing in Barahoti in Chamoli district. Since then, the ‘intrusions’ have unabatedly continued and will continue in 2019. This probably means India needs to remain vigilant.

One of the most memorable events which took place in 1978 was when 18 farmers in Xiaogang village, in Anhui Province, signed a secret agreement to divide collectively-owned farmland into individual pieces and drop the collectivisation of the Great Leap Forward, which resulted in some 40 million casualties.

Forty years later, the name Xiaogang is been used for a different project: the building of a large number of ‘model’ villages in Tibet, along the border with India.

On October 19, China Tibet News reported that since the beginning of 2018, Tsona County, north of Arunachal Pradesh’s Tawang District, has been “vigorously promoting the construction of border ‘Xiaogang’ villages” (the literal meaning of ‘Xiaogang’ is ‘moderately well off’ ). Tsona County alone has invested 519 million yuan (US$ 74 million) in the construction projects of nine border villages, benefiting 1,961 people from 617 households. Some 2.2 billion yuan (US$ 314 million) has already been spent and 40 per cent of the projects completed.

In May, China Tibet News explained that Lepo, the first village in Tibet, north of the border in Khenzimane (in Tawang district) boasted of rich vegetation and clear waters: “With impressive scenery and unique ethnic customs, Magmang ecological civilization village is also situated in Lepo Valley, Tsona County.” Magmang was awarded “China's beautiful leisure village” by the Ministry of Agriculture. China has 26 national key tourist attractions; including the Lepo Valley, near the Thagla ridge, which saw clashes between India and China in October 1962.

The new tourist scheme, "Slowing down the speed of tour, enjoying the sea of azaleas in Lepo Valley", prolonged the peak season, explained the Chinese authorities. It is probably not a coincidence that the Dalai Lama spent his last night in Tibet in Magmang on March 30, 1959, on his way to take refuge in India. The next day, he crossed the border at Khenzimane.

The model villages are officially linked to two themes: ‘poverty alleviation’ and ‘defense of the borders’. The local populations are said to be the ‘Guardians of the Sacred Land’.

Beijing has started duplicating what has been done in Nyingchi and Lhoka areas in Ngari prefecture, north of Uttarakhand and Himachal Pradesh; first and foremost, improving the infrastructure of the border by building Xiaogang villages.

Part of this scheme is to build three new airports in Purang, in Ngari prefecture of Western Tibet; in Lhuntse, north of Tawang district and a last one, near the Nepal border. The construction should this year and will be functional in 2021. The official objective of these airports is to strengthen the border's communications. Let’s not forget airports and highways on the plateau legally have a dual-use (civilian and military).

Enter the dragon
There is another aspect to the Communist Party’s policy on the Indian borders: recalcitrant Tibetans are relocated to places further away from ‘sensitive’ Indian borders. An article appeared in the French edition of China Tibet Online: ‘Relocation of the villagers of Lhodrak: mission over’, mentioning ‘relocation’ of Tibetan populations far from the border. Some Xiaogang villages are located north of Bhutan, near the eastern trijunction between India, China and Bhutan, an area disputed by China.
There is however a difference with the western trijunction (Doklam). India has no military presence in the area.
A new Type 15 light tank was also inducted by the People’s Liberation Army (PLA) on the Tibetan plateau. Chinese analysts say it is for “combat readiness in these sensitive regions.” Beijing’s defence ministry confirmed the deployment. In July, The PLA Daily claimed that Beijing moved military gear while conducting a long live-fire exercise at an altitude of 5,000 meters, on the plateau. The Western Theatre Command simultaneously moved the hardware by rail and road south of the Kunlun Mountains in northern Tibet.
All these trends show that India should remain watchful during the coming year and certainly not get carried away by any ‘Asian brotherhood’ slogans.
Play the duet, but be ready for the duel.
Posted by Claude Arpi at 12:08 PM