Faithful among the faithful 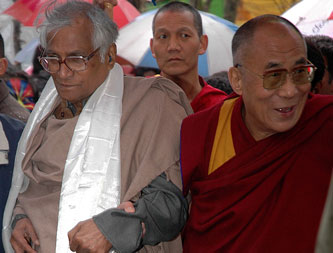 On the occasion of George Fernandes' 88th birthday, I have posted an old interview.
Now, he is no more. Very sad day for India and Tibet!

My old post of April 2018
George Fernandes is today 88 years old.
He has always been a courageous man.

The Prime Minister wrote: "Greetings to Mr. George Fernandes on his birthday. Generations of Indians will remain grateful to George Saheb for his historic role in preserving India’s democracy. A people’s person, he distinguished himself as a capable administrator. I pray for George Saheb’s good health."

In March 2006, I had the privilege to interview him on his relation with Tibet and the Dalai Lama ...and China.
Soon after, he would not be well enough to answer questions.

Faithful among the faithful
Interview of George Fernandes in New Delhi

Most of the Tibetans I met in Dharamsala said that George Sahib is an unwavering friend of the Tibetans. Could tell us about your association with the Dalai Lama and the Tibetan refugees?

My relationship with His Holiness [the Dalai Lama] started after Dr Ram Manohar Lohia requested him to send some [Tibetan] youth to learn socialism from me. Even before that I had established a personal relationship with His Holiness: it was at the time he arrived in India [in 1959].
Soon after His Holiness had left his country and asked for refuge in India, I requested the Chinese representative [Consul General] in Mumbai to receive a delegation. I spoke to the Chinese Representative on the phone and told him: “I will be coming with a few of our workers and I would like you to receive a memorandum”. Eventually, my delegation became very large, perhaps one thousand people! Everybody was quite worked out by the fat that His Holiness had been thrown out of his own country. When we reached the Chinese Consulate, I found that all doors had been closed and from the open windows we could see the staff was looking out. I had the memorandum in my hand. I asked them to open the gate that was shut. I had a mike in my hand and I addressed the Chinese staff. I told them: “Open the gates, we have asked for time, we want to present a memorandum”. There was no response from anywhere, the Chinese staff was still watching [at the windows]. We then shouted slogan.

After a while it became obvious that nobody was going to meet us. I did something that later on Dr. Ram Manohar Lohia termed as very stupid. I send one of my colleagues, to Grant Road market in a taxi and ask him to bring all the rotten eggs and tomatoes he could find. I sent another colleague in another taxi to my office to bring a photo of Mao Zedong. Both came back after doing their job. We sent the rotten eggs and tomatoes at the portrait, A few days later, the Government of India (Nehru was the Prime Minister) received a letter from the Chinese Government. They asked an unconditional apology from the government. Nehru wrote immediately back describing our political system with many parties [and he could not control the parties]; he wrote: “please do not take this seriously”. This letter went to Zhou Enlai and a reply came: “We do not care about your political system. We demand an unconditional apology and we will neither forget, nor forgive for a hundred years.” Since that day, I had to be on His Holiness’ side.
My first personal meeting with him was when he came to Delhi in Parliament House. He had come to meet Dr Lohia with a young man [Lodi Gyari] (he has grown older now since; he today deals after the external affairs of His Holiness). His Holiness brought this young man to meet Dr Lohia and after their talks were over, Dr Lohia told Lodi Gyari: “You go to George Fernandes (my house was close by) to learn about our socialist policies”. It is how it started, after this first meeting and the Mumbai incident.

Was it a cause for justice for you?

After the Chinese entered into Tibet, Dr Lohia took a very very strong stand. He said that it was a baby’s murder. He was very keen that we should fight for the rights of Tibetan people to have their country for themselves. Jaya Prakash Narayan [another famous Indian Socialist leader] was of the same view. Sometimes after Dr. Lohia passed away, Jaya Prakash organized a Conference for Tibet [in 1960]. I participated and I had to take the responsibility of Dr. Lohia’s thoughts on Tibet. I was  determined  to  see  that  we  keep  the  movement  going.  We organized several meetings and later another Conference to which people from all over the world participated (it was before the 1962 Indo-China war). Thereafter, there was a conference which held in Germany. I also participated. The resolution taken at that Conference was to pursue the struggle till His Holiness is able to go back to Tibet. We also supported the initiatives that others took in other parts of the world along with this young man [Lodi Gyari].
In the United States, he received a considerable support from the political leadership and also the Socialists international.

How do you explain that at least in India it is mostly the Socialists who have been part of this movement?

Contrary to the Marxists, every Socialists (I mean democratic Socialists) has been committed and remains to this day committed to this cause. Yesterday, I received a letter from His Holiness explaining how he would like to see Tibet with his own government looking after the Tibetans issues without affecting China. In any way, it would hurt China’s interests.
It was his statement for the Tibetan Uprising Day (March 10).

You have been Defense Minister of India and you are aware that in the proposal of the Dalai Lama, the defense of Tibet will remain China’s responsibility. In an eventual conflict, which, according to you, role will the Tibetans play?

Well, I hope that after the 1962 conflict there will be no any other conflict between India and China. India was caught unaware. Pandit Nehru had gone into a policy called Hindi-Chini Bhai Bhai (Indians and Chinese are brothers). He believed that it was the way to avoid any conflict. Today’s India is not the India of Pandit Nehru, I don’t think that such situation [can occur] when India stands tall and strong (and so is China). We can not afford a war or conflict between the two nations. It would be a disaster in which none would survive.

You visited China in 2003 as Defense Minister, had the Chinese forgotten what you did in 1959?

One day the Chinese Ambassador [to India] came here; we had a meeting. I told him: “I was told that I would not been forgiven and forgotten for 100 years.” He said: “Now, this is the past. The leadership of our country (China) wants you to come”. I was hesitant. I did not know how to reconcile myself with all this. Soon after that, I had 2 or 3 meetings with our ambassador to China. The Ambassador said, “it is very important that you go [to China], the [leadership] want meet you, and to know you.” Finally the Government decided that I should go.

Do you see chance for a success in the negotiations between Lodi Gyari and his Chinese counterparts? Many people are doubtful, though the Dalai Lama has very much reduced his demands.

Well, I have a feeling as the time goes by, (I not looking at decades) in the short frame of time, China will understand why Tibet should have its own rights. I have been briefed by the people having the dialogue with Beijing. I do not get a feeling that the chapter is close, it is still open.

Note of the Government of China, 27April 1959 to the Ministry of External Affairs, New Delhi