Where is the Indian Trade Agency? 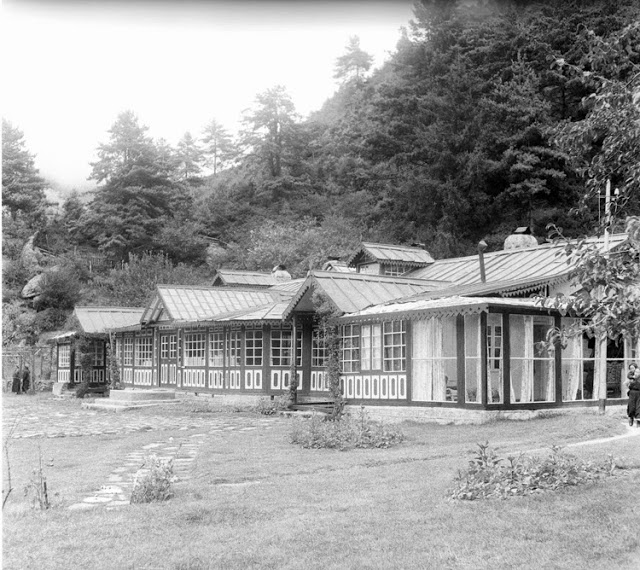 China Tibet News recently reported that the local Preserving Institution of Cultural Relics of the Tibet Autonomous Region (TAR) had completed some archaeological work on Relics of the Qing (Manchu) Dynasty at Yatung in the Chumbi Valley, which witnessed the Doklam incident last year.
The so-called occupation of the Chumbi Valley by the Manchus is a new way to rewrite the history and show that these areas close to the Indian border always belonged to China …and of course, it is linked to the Silk Road!
The website speaks of “an irreplaceable section of South Asian corridor on the Silk Road, Yatung Custom Relics has been recognized as the witness of the central government's valid ruling over Tibet and China's claim on sovereignty.”
‘Valid’ ruling is a new term.
The TAR ordered the ‘repairing-for-salvage work’ of the relics and the TAR Cultural Relics Bureau set up a joint expert group and conducted a field research, “during which six buildings and roads that linking the buildings have been discovered.”
The press release mentions: “the whole relics were filled with collapse piles, and a large number of porcelains, iron and bronzes were unearthed, too. Analysis on layout, scale and interior structure of these buildings has preliminarily shown that they have been used as working offices, dormitories for workers and garrison, Temple of Guan Yu [?], customs clearance place, as well as daily goods trading center.”
Did the Manchus occupy the Chumbi Valley?
China wants now to preserve the 'evidence' and conserve the relics.
The Yatung County’s Communist Party committee and the Yatung County Government jointly formulated an Emergency Protective Repair Plan with some working priority.


The Indian Trade Agency in Yatung
There is another angle omitted by Xinhua and its branches.
India had a beautiful Trade Agency in Yatung.
The building belonged to the Government of India.
It was visited by the Indian Prime Minister of India in September 1958.
It was destroyed by the Chinese PLA after the 1962 war.
Apparently, the Yatung Relics Committee did not look for the vestige of Indian presence in Tibet?
Were their excavations selective?
Incidentally, a Memorandum presented by the Ministry of Foreign Affairs in Beijing to the Embassy of India in China on December 29, 1962 accused some Indian officials of looting of the Indian Agency at the end of the 1962 War.
The Chinese communication says: “According to reports from China's Tibet local authorities, when the former Indian Consul-General in Lhasa AR [Arvind] Deo and his staff withdrew from Lhasa and were passing through Yatung, they seriously damaged property within the premises of the former Indian Trade Agency in Yatung in the afternoon of December 15, 1962. For instance, they demolished several motor-cars, broke up a diesel generator, cut open several dozen barrels of gasoline, diesel oil and machine grease with hatchets, broke down doors and windows.” All pure lies.
Why should Indian officials destroy India’s property?
The Memorandum adds: “On the eve of their withdrawal from Lhasa, the staff of the Indian Consulate-General there also smashed the glass on the doors and windows of the Consulate-General building in Lhasa.”
But China alleges further, “It must be pointed out that the above-mentioned acts of the staff of the Indian Consulate-General not only constituted a breach of the local public order, but obviously harboured an ulterior motive, that is, to shift the blame on the Chinese side. The Chinese Government sternly condemns these despicable acts of the former Indian Consulate-General and its staff and reserves the right to look into this matter further.”
The Indian Consulate General in Lhasa had been closed a few days earlier and Arvind Deo was rushing to Gangtok to report about the difficult times he had go through during the previous two months.
Why should an Indian diplomat loot the Indian Trade Agency?
A few years later, the building was later completely destroyed by China and India kept quiet. Why? Presumably not to ‘irritate’ China.
The Yatung Relics department should be asked to excavate the area and open it to the visitors going on the Kailash-Manasarowar Yatra, when the pass through the Chumbi Valley.
But perhaps the Wuhan consensus does not allow such request. It is very sad.
Posted by Claude Arpi at 7:22 AM