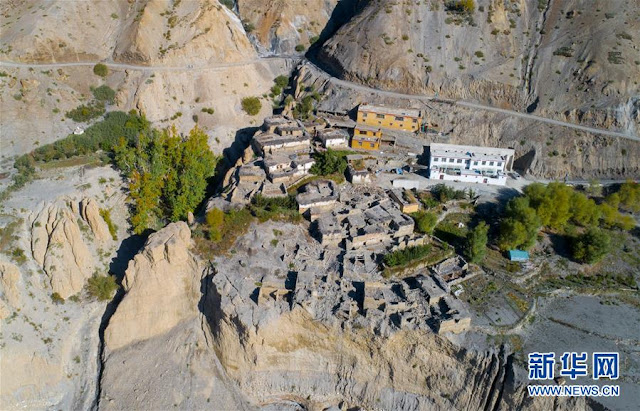 Year 2019 saw the mushrooming of model villages in Tibet at the proximity of the Indian border.


Govern the nation by governing the borders; govern the borders by first stabilizing Tibet; ensure social harmony and stability in Tibet and strengthen the development of border regions.

Thus spoke President Xi Jinping about China’s relations with Tibet.
The authorities in Tibet have started implementing the theory of their boss and the party’s propaganda is doing its best to entice the local Tibetan population to side with the Communist Party.
This is a serious development, unfortunately ignored in India.
A new formula can be found in every speech of the local satraps, the inhabitants of China’s borders (with India) should be “the protectors of the sacred homeland and the builders of happy homes.”
It has taken concrete shape with the growing number of new ‘model’ villages on the Tibetan side of the Indian border, mainly north of Arunachal Pradesh, but also in Himachal and Ladakh.
Officially, this development is linked with ‘poverty alleviation’ and the ‘defence of the borders’.
Several senior Communist leaders have visited these new villages, either north of Kibithu in the Lohit valley; in Metok, north of Upper Siang district; in Yume (also written Yumai), north of Takshing in Upper Subansari or in Lepo, Marmang and Tsona, north of Khenzimane and Tawang.
Wu Yingjie, the Party Secretary of the Tibetan Autonomous Region (TAR) even gave an interview to The People’s Daily on the development in the border areas.

The Xiaogang model villages
Officially, the scheme is linked with ‘poverty alleviation’, but also ‘defence of the borders’. These model villages are called Xiaogang, moderately well-off.
It has another connotation. The 40th anniversary of “China's reform and opening up” celebrated across China in 2018 put a great emphasis on an event which took place in 1978, when 18 farmers in Xiaogang village, in Anhui Province, signed a secret agreement to divide collectively-owned farmland into individual pieces and drop the collectivization of the Great Leap Forward (GLF), which between 1958 and 1960 resulted in some 40 million casualties; in Xiaogang itself, 67 villagers out of 120 had died of starvation between 1958 and 1960.
Forty years later, the name Xiaogang is been used for the new project of the building of a large number of ‘model’ villages along the border.
On October 19, China Tibet News reported that since the beginning of 2018, Tsona County, north of Arunachal Pradesh’s Tawang District, has been “vigorously promoting the construction of border ‘Xiaogang’ villages”.
The new project was given publicity soon after the conclusion of the 19th Congress, when Xi Jinping sent a reply to two young Tibetan herders who had written to him introducing their village, Yume.

A New Xiaogang Village
China Tibet News reported on the “Relocation of Jisong village: moving towards happiness”
Gyasum (or Jisong in Chinese) Village in Tsona County is located near the Indian border at 4,500 meters above sea level. The Chinese website commented: “With bad environment, frequent frost damage, poor living conditions and lack of public facilities, the villagers have a very difficult life.”
We are told that in June 2017, “after deeply investigating Jisong Village, the first phase of Jisong Village's high-altitude ecological relocation project was decided to be launched by implementing measures such as appropriate separation of production and living areas, special feeding of livestock in pastoral areas and labor liberation into the tertiary industry.”
The latter probably means that the main income of the village will be tourism.
So far, Beijing has invested 72.8 million yuan (11 million US $) to build this ‘modern’ border village “with convenient transportation, good environment and complete facilities, so that the villagers of Jisong Village can truly lift themselves out of poverty and live and work in peace and contentment.”
The article speaks of ‘relocation’. Does it mean that dwellers are brought from outside? Probably.
It will soon be populated with Hans, it is perhaps considered ‘safer’ for the border areas.
China Tibet News further notes: “After more than a year of construction, all houses, commercial streets, village service centers, cultural and sports squares and roads have been completed.”
It is said to be the sixth border Xiaogang ‘well-off village’ in Tsona County and the first high-altitude ecological relocation and resettlement site in the county. (see map)
The description continues: “The new village is not only spacious, comfortable, and equipped with complete facilities, but also laid with geothermal heating facilities for each household. Villagers no longer have to endure the pain of cold winter, living conditions have achieved a qualitative leap.”
China is pampering its border populations to ‘defend the frontiers’ …against?
Guess!

On the other side of the Indo-Tibet border
A couple of thousands kilometers away, in Ngari Prefecture, north of Uttarakhand/Himachal Pradesh, model villages are also coming up.
China Tibet Online reported: “Ngari: a microcosm of changes in China’s borderlands”
Tsosip Sumkyil, also called Chulusongjie or Chusong is located north of the Sumdo sector of Kinnaur district (Himachal Pradesh).
The Chinese website said: “Chusong Village, a remote village more than 2,000 kilometers from Lhasa, is located in Chulu Songjie [Cosibsumgyi] Township, Zanda County, Ngari Prefecture.”
According to China Tibet Online “Chusong means ‘land formed by a dried-up lake’ in Tibetan: “The altitude here is about 4,000 meters above sea level, and snow cover on the mountains lasts for half a year, making this a veritable ‘snow island’. In the past, it is really hard to get here. However, today, when you see the brand new, white, two-story buildings and the old houses nearby, you see how dramatically China’s border regions have changed.”
Villagers were interviewed to tell stories about their changed life.
Year 2019 is bound to see a further mushrooming of ‘model’ villages along the border.
Posted by Claude Arpi at 6:51 AM