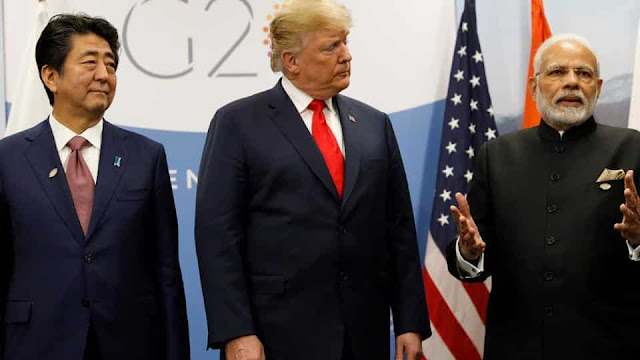 The planet is passing through difficult times. Even the most optimistic are aware that the environment is degrading fast and it may be difficult to stop the ecological downfall; at the same time, one has rarely seen so much tension among nations.
There are however solid reasons to hope that global solutions can be found through dialogue. One such occasion is the yearly G20 (or Group of Twenty).
Collectively, the G20 economies amount for some 85% of the gross world product, 80% of world trade and two-thirds of the world population.
The G20 came into existence during the 2008 planetary financial crisis, when the world leaders had no choice but to collectively address issues.
Before his departure for Buenos Aires, Prime Minister Narendra Modi stated: “The G-20 seeks to promote multi-faceted cooperation among the twenty largest economies of the world. Through the ten years of its existence, G-20 has strived to promote stable and sustainable global growth.”
Though the theme of the Summit was “Building Consensus for Fair and Sustainable Development”, the world press was mainly excited about the ‘Dinner’.
Chinese President Xi Jinping was sharing a supper with his mercurial US counterpart, who has given him sleepless nights since several months, trying to ‘rebalance’ the world economy and principally the trade between the two largest world economies.
The South China Morning Post wrote: “Chinese and American officials may have spent weeks preparing for the high-stakes summit between Xi Jinping and Donald Trump, but any hopes of resolving the current trade war may ultimately hinge on their personal chemistry.”
The ‘successful dinner’ was the first face-to-face meeting between the two leaders since Trump started a trade war with China.
More than the Summit itself, it is perhaps the sideline encounters which had to be watched, they could ultimately help redesigning the political geography of the planet.
One was of particular significance for India as well as Asia.
Narendra Modi met Donald Trump and Japanese Prime Minister Shinzo Abe for their first trilateral exchange to discuss major issues of global. It assumed significance at a time China is flexing its muscles in Asia, now known as the Indo-Pacific region.
After the meeting, Modi asserted that the three nations will "continue to work together on shared values. …If I put it diffirently, Japan, America, and India is ‘JAI’, meaning success. We are making a new beginning. …I believe, [JAI] will play a big role in promoting world peace and prosperity.”
While the Indian Prime Minister spoke of the convergence of vision between the three nations, Abe affirmed that he was happy to participate in the ‘first ever JAI trilateral’; as for Trump, he appreciated India's growth story.
The three leaders noted their cooperation on all global issues such as better connectivity, sustainable development, counter-terrorism and maritime and cyber security.
As another strong message to China, the JAI leaders spoke in a free, open, conclusive and rule-based order in the Indo-Pacific region, based on respect for international law and peaceful resolution of all differences.
Let us remember that China claims almost all of the South China Sea, rejecting the counterclaims of Vietnam, the Philippines, Malaysia, Brunei and Taiwan.
It is today crucial for Delhi to ‘balance’ China, who has shown strong hegemonic tendencies, particularly in the South China Sea …and on Indian borders.
Modi, Trump and Abe have now agreed to cooperate in various ways and they stressed the importance to continue with the ‘Trilateral Format’ at multilateral conferences.
Incidentally, a RIC (Russia, India and China) meeting also took place and Modi had earlier a good meeting with Xi Jinping.
Delhi bats for pragmatic multilateralism, while defending its own interests.
Posted by Claude Arpi