Big Data near the Indian Border 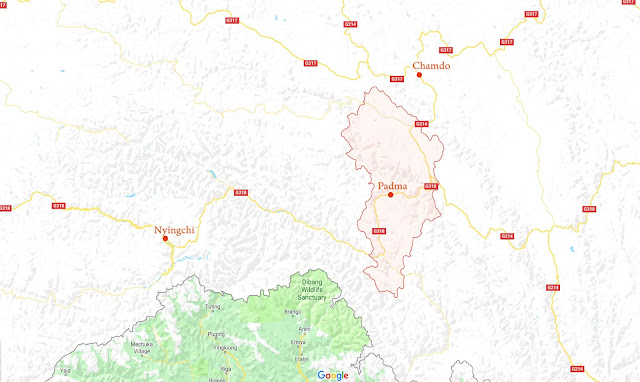 Baima (or Padma in Tibetan) is a township in Pashoe County (Baxoi in Chinese) in Chamdo City of the Tibet Autonomous Region (TAR); it lies at an altitude of 3,772 metres (12,378 ft) on the National Highway G318.
China Tibet News reported yesterday that ‘Big Data’ were used for ‘poverty alleviation’ in the county. It is a bit worrisome, for an area located relatively close to the Indian border.
The website said: “In the age of information and network, ‘big data’ plays an even more important role in assisting decision-making for all kinds of work. In recent years, relying on the advantages of the ‘big data’, village task forces of Baxoi [Pashoe] County can record the progress of poverty alleviation work in real time and establish the mechanism of data administration and assessment, which greatly improve the effectiveness of poverty alleviation work.”
‘Improve the poverty alleviation’, as well keep a tab on the restive border population to ultimately …stabilize the border.
This the un-publicized objective.
This is also called 'special credit scheme', which 'notes' every Chinese national according to what he does.
China Tibet News continued: “Aiming at popularizing good practices and experiences between the village task forces, as well as giving feedbacks of poverty alleviation work among farmers and herdsmen in time, each village task force of Baxoi County created its own WeChat Official account to publish poverty alleviation conditions and preferential policies.”
What is not said is that every detail of the life of the villagers and their whereabouts will be monitored by ‘Big Data’ (Brother).
It is also called a Smart Grid.
Beijing official objective is not only poverty alleviation, “the village task forces using specific data processing tools to record detailed information including villagers’ income, population trends, income approach, poverty-causing factors and assistance measures, so as to steady the process of poverty alleviation.”
Villagers will perhaps gain some wealth, but definitively lose their freedom.
For the Chinese State, it is crucial to monitor the border populations.
Pashoe County is probably a test case for other counties, closer to the border.
The website even admitted: “In addition, the county's village task forces use GPS to collect the geographical coordinates of the relocated families and complete their information. Through information integration and comparison, the actual situation of every household can be accurately reported.”
‘Relocated families’ probably means that the villages will soon populated by outsiders. Quite frightening!

In Ngari Prefecture
On the opposite side of the Indian border, in Ngari Prefecture, north of Himachal Pradesh and Uttarakhand, the seventh batch of village task forces “have vigorously carried out relevant work, which has contributed to building the all-round well-off society and realizing the long-term development and the long period of stability,” said China Tibet News.
The website explained that the Ngari Prefecture's Party committees at all levels, have held “working meetings and deployment meetings for four times to promote and deploy the work of cadres stationed in villages.”
Apparently, they are not as smart as their colleagues in Pashoe, as they don’t use as yet Big Data. It will certainly come very soon.
The objectives of the village task forces are to “study the Constitution, Party Constitution and Religious Affairs Regulations. At the same time, they have learned both Tibetan and Chinese, so as to improve their ability to serve the masses. They have strictly abided by the territorial management system and work system, actively assisted party committees in carrying out various work, and accepted the supervision of the masses.”
Supervision of the masses is the new (old) motto.
It is said that according to the actual situation, “all grass-roots offices have adjusted the work of 70 village task forces. Party committees and governments have purchased 145 first aid kits, collocated special notebooks for village task forces, strictly implemented the physical examination, pre-job training, fund management and use as well as feedback system, and carried out regular and irregular supervision and inspection for 38 times.”
These task forces are a tool of the Communist Parry to control the populations, particularly on the borders.

What is a village task force?
China Tibet News provides an answer: “[these task forces] has attached great importance to ideological and political education, and carried out education practice activities for 2,806 times for masses, and 200,000 people have participated in. Special lectures were held for 2,395 times to educate and guide farmers and herdsmen to change their ideas and actively participate in poverty alleviation. The village task forces have actively communicated and coordinated with the departments of poverty alleviation, education, and finance, so as to publicize the preferential policies on employment, entrepreneurship and free education.”
In another words, ‘propaganda’ work.
Village task forces with Big Data will be a deadly cocktail.
What is surprising is the 67 years after having ‘liberated’ Tibet, Beijing still needs to convince the Tibetan of its bona fide …and still needs to fight poverty. Every propaganda article in the 1950s mentioned that poverty has been eradicated after the arrival of the People’s Liberation Army on the plateau. Now, it appears that it is not the case.
Strange, isn’t it? Has ‘poverty’ reintroduced on the plateau, after the early eradication?
Posted by Claude Arpi at 9:44 AM