Follow the Party: but where are the Tibetans' allegiance? 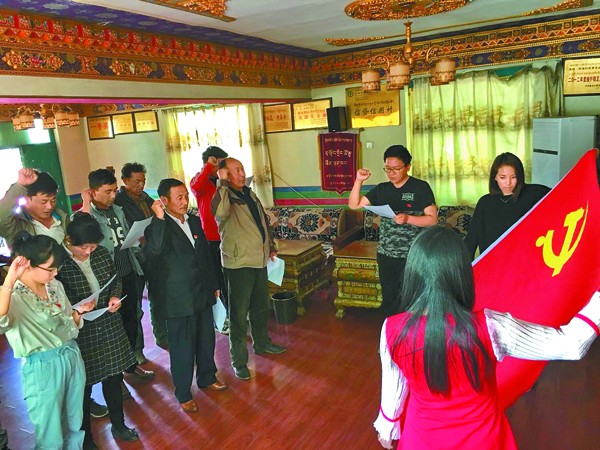 On July 4, Xi Jinping, general secretary of the Communist Party of China's (CPC) Central Committee, called on the CPC members to implement “the Party's organizational line for the new era and make the Party stronger.”
Efforts were required to break new ground in "the great new project of Party building,” he said.
Xi added: “In order to uphold and develop socialism with Chinese characteristics in the new era, our party must have the courage to carry out self-reform to make the Party stronger."
The Chairman of the Central Military Commission spoke of the importance of fostering competent officials who are loyal to the Party, have moral integrity, and demonstrate a keen sense of responsibility: “all measures should be taken to attract excellent, patriotic, and devoted people.”
Xi insisted on the principle of “selecting officials on the basis of both integrity and ability, with priority given to integrity.”
‘Integrity’ means, "follow the Party line".

Taking oath to follow the Party for life
In this context, ‘oath taking’ ceremonies were organized all over Tibet on occcasion of the 97th Anniversary of the Communist Party’s Foundation.
The CPC was founded in 1921, chiefly by Chen Duxiu and Li Dazhao. The party grew quickly, and by 1949 after driving the nationalist forces, the Kuomintang (KMT) from mainland, Mao established the People's Republic of China.
Let us remember that the world's largest armed forces, the People's Liberation Army (PLA) which has among other tasks to man the Indian border, is the Army of the Party.
During the recent ceremonies, the stress was put on education, including ‘patriotic’ education for the masses (known as the ‘Four Standards and Four Loves’).

All-over Tibet
In Ngari Prefecture, the People's Armed People (PAP) conducted a 'One-Week Oath Taking' program. A opening function was organized to mark the occasion.
The First Division of TAR’s PAP took oath to put their life (till death) at the Service of the Party.
In other places, oath-taking ceremonies/functions were organized too.
In Purang, near the Nepal-Tibet-India trijunction, the Border Security and Inspection Forces took the oath of Service to Party.
In Lhasa, the Military leadership sang Revolutionary songs in front of Potala Palace.
The 11th Committee of the China's Steel Road Construction Company Office retook Oath of Service to Party in Chusur county (of Lhasa City) on June 29.
In Nyingtri (Nyingchi) City, the Party organized various program of songs and dances ‘praising the graciousness of Party’ and urging people to follow the Party line.
In Ratoe village in Nyethang town, Chusur County in Lhasa City, Party cadres and Party officials also took the Oath of Service to Party.
The Gyatza county of Lhoka Prefecture also celebrated the ‘One Week’ program. Newly resettled Tibetans from other areas (an euphemism for displaced nomads) were welcome.
Group songs were presented by county Gyatza county Artist Association.
In Chongye in Lhoka Prefecture, the Publicity (Propaganda) Bureau’s officials marked the 97th CPC’s Anniversary by retaking Oath of Service to Party.
An audience of farmers and nomads were explained by Publicity Bureau’s officials, the meaning of the ceremony.

Near Indian Border
Even near the Indian border in Tsona (north of Tawang district of Arunachal Pradesh), Wang Kaibing, a member of the Standing Committee of the County Party Committee and other officials went to a grazing point near the border “to carry out the theme of the Party”, i.e. the villagers are “sacred land keepers and the builders of happy homes”.
Officials were accompanied by the Armed Police personnel stationed on the border.
All party members faced the Party flag and retook the Party's Oath.
One Pema Tsering urged the participants to first remember their identity as Party members, to be loyal to the Party, to work actively and fight for Communism for the rest of their life.
All party members spoke of jointly studying the spirit of the 19th Party Congress and promoting the ‘Four Standards and Four Loves’.
Pema Tsering, who belongs to the Border Temporary Party Branch, gave a report on the development on the border.
Wang Kaibing spoke highly of the work done by the Temporary Party Branch and urged to strengthen the political leadership in the border areas: “We will strengthen the education of the ideals and convictions of the farmers and herdsmen in the border areas, educate and guide the farmers and herdsmen to strengthen their ideals and convictions, and actively maintain a high degree of unity in the ideological and political actions with the Party's Central Committee, and resolutely safeguard the authority of the Party Central Committee with Comrade Xi Jinping as the core.”
He spoke of:

The Five-Point Peace Plan
In 1987, the Dalai Lama presented his Five-Point Peace Plan to the US Congress.
His third Point spoke of the “fundamental human rights and democratic freedoms must be respected in Tibet. The Tibetan people must once again be free to develop culturally, intellectually, economically and spiritually and to exercise basic democratic freedoms. …While Tibetans in exile exercise their democratic rights under a constitution promulgated by me in 1963, thousands of our countrymen suffer in prisons and labour camps in Tibet for their religious or political convictions.”
The democratic freedoms mentioned by the Dalai Lama seem so far today.
Under Xi Jinping's leadership, China has greatly intensified the Rule of the Party.
Even populations on the Indian borders have to take oath to serve the Party ...for life.
But can it last forever?
Are the people ‘following’ the Party on their free will?
One test would be to allow the Dalai Lama to return to Tibet for a short visit.
We could probably see the real allegiance of the Masses.
China will not take this risk, they know too well where are the ‘Loves’ of the Tibetans people.