The Dalai Lama: the Difficult Years 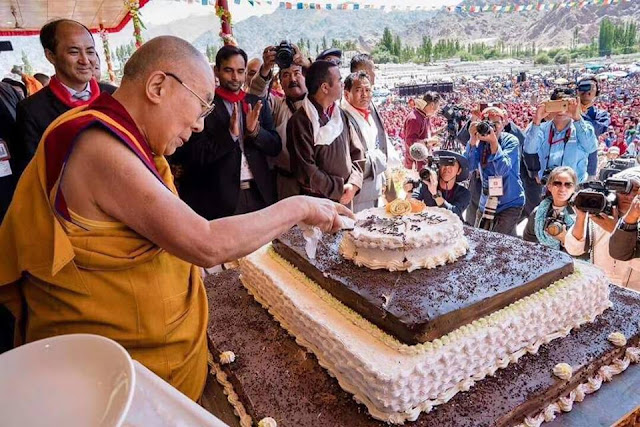 The Dalai Lama turns 83 today.
He will be celebrating his birthday in Ladakh at the Shiwatsel Phodrang, the teaching ground at the outskirts of Leh.
Yesterday the Dalai Lama told the press: “I am very happy to be here once more. I seem to be physically fit and if that continues I hope to spend some time here, avoiding the monsoon on the plains. The warm weather here will probably help relieve my joint pain. You people of Ladakh have a special bond with me based on your faith and loving-kindness, of which I am very appreciative.”
Is he preparing for his ‘return’ in the mountainous region?
Only he knows.
But it is certainly one of the possibilities.
In the meantime, he is in good heath (except for the knees) and continues to guide his people.
From 10 to 12 July, he will teach Shantideva’s A Guide to the Bodhisatva’s Way of Life.
He will also participate in the Yarcho Chenmo - the ‘Summer Buddhist Council’ of philosophical debate and discussion – from July 18 to 20 at Samstanling Gonpa Sumoor in Nubra Valley.
On the occasion of his 83rd Birthday, I post the transcript of a meeting between the Tibetan leader and Jawaharlal Nehru, the Prime Minister of India in March 1962.
It was hardly three years after he took refuge in India ...and seven months before the conflict with China.
The rehabilitation of the Tibetans was going on full swing.
It was a difficult time.
Thousands of monks were still living in poor conditions in camps in Buxa in Assam and thousands of lay refugees were working on high-altitude Himalayan roads.
The first priority for Nehru and the Dalai Lama was education of the children.
The ‘Mysore scheme’ refers to the resettlement of the refugees in camps (Mundgod, Bylakuppe, Hunsur) near Mysore in Karnataka.

The notes have been taken by the Prime Minister’s Office.
(Extracts from Volume 76 of the Selected Works of Jawaharlal Nehru, (Jawaharlal Nehru Memorial Fund)

Talk with The Dalai Lama
The Dalai Lama called on the Prime Minister the 25th March, 1962, at 11 a.m. and again on the following evening at 6.30 p.m. on his way back from Mysore, where he had recently visited the Tibetan Refugee Settlement.
In reply to PM's enquiry, the Dalai Lama said that the Mysore Scheme was going ‘excellently’.
He added, however, that the Tibetans would have to put in hard work in order to make the Scheme fully successful. The Dalai Lama expressed his gratefulness to PM for all that was being done to rehabilitate Tibetan refugees in India.

2. The Dalai Lama also spoke about the general question of settling Tibetan refugees on land as a long term measure: the programme for the education of Tibetan youths; the future of refugee Lamas in India; and his book, which he hoped to publish shortly. PM gave His Holiness a sympathetic hearing and passed necessary orders on points discussed on the above mentioned subject, which are summarised below:

Settlement of Tibetan refugees as agriculturists as long-term aim
3. The Mysore Scheme should serve as a prototype, and finalised as soon as possible. Measures should be taken urgently to provide adequate water supply, and medical cover. There is little point in opening primary schools unless teaching staff has been provided. As and when the time comes there should be a middle school and later a high school.

4. The important thing was to realise the long term aim to rehabilitate all Tibetan refugees on land. It should be realised that the Tibetan refugees working on road etc. were doing so only as a temporary expedient, and there should be no hesitation in pulling them out from being so employed as and when land becomes available to rehabilitate them.

5. The Scheme already approved administratively for Madhya Pradesh should be pushed forward, and early arrangements made to inspect one other site offered by the Government of Madhya Pradesh.

6. PM would mention to the Chief Minister of Orissa  [Biju Patnaik] or if necessary, write to him, to suggest alternative sites suitable to settle 5,000 Tibetan refugees; the sites so far offered having been found unsuitable.

7. PM felt that it should be possible to rehabilitate on land some 10,000 refugees in NEFA. The scope of the present Scheme should be expanded to make this possible.

8. PM offered to speak to the new Chief Minister of Mysore  [SR Kanthi] to take some 2,000 more Tibetan refugees as soon as the first lot of 3,000 have reached Mysore for settlement.

9. At the request of His Holiness, PM offered to write to the Chief Minister of Punjab [Partap Singh Kairon] and the Lt-Governor of Himachal Pradesh  [Bajrang Singh Bhadri] to provide some suitable land to rehabilitate Tibetan refugees.

10. JS(E) [Joint Secretary - East in the MEA] was directed to put up a note to PM as and when any of the Chief Ministers mentioned above came to Delhi to call on him.

11. Refugees who worked towards the implementation of such Schemes in reclaiming land etc. should be given a wage at the normal rate applicable in the area.

12. P.M. ordered that "we must take up these matters and finish quickly as well as we can - Mysore and others".

Education of Tibetan Youths
13. PM ordered that there should be residential schools for all Tibetan youths - boys and girls - of school-going age except in regard to children who formed part of an agricultural settlement and for whom good day schools can be provided, as for example in Mysore.

14. It would not be fair to expect that children would receive proper education in the so-called roadside schools. The requests from parents to send their children to residential schools should be complied with. It was pointed out by the Dalai Lama that this decision of the Prime Minister would meet the case of children living with their parents and going to roadside schools in such places as Narkanda.

15. PM felt that we should make proper arrangements for the running of the residential schools. PM also ordered that additional schools should be opened beyond the three functioning at Simla, Mussorie and Darjeeling at the moment, to meet the demands of all school going Tibetan youths wishing to receive education at such schools. In particular, arrangements should be made urgently to provide education to some 400 Tibetan youths who are at present in Sikkim. The best way to do it might be to set up a residential school in Gangtok itself on the lines of one of the three existing schools.

16. Prime Minister has also ordered that the nursery school at Dharamsala should become the responsibility of the Government of India. It was not desirable that a school of this type should depend on charity, mostly received from foreign sources.

17. The definition of students eligible to receive education under this programme should be widened to include those who came to India even before 31.3.59, but who were prevented from returning to Tibet because of political developments which took place since then. The only proviso would be that parents of such children, who are well to do should be asked to contribute towards the expenditure incurred on the education of their children.

18. Children of refugee parents who are in Nepal and who for various reasons cross over to India should be given the same facilities for their education as admissible to Tibetan children whose refugee parents are in India.

19. PM mentioned several times that he would like highest priority to be given to the proper running of schools for Tibetan children.

20. PM enquired about the UK Save the Children Fund school in Simla and advised the Dalai Lama to suggest to the Principal, Lieut-Col. Young, not to try and run the venture as a British Public School.

Tibetan Lamas in India
21. The Dalai Lama mentioned that there were at least 7,000 Tibetan Lamas in India of whom only some 2,500 were being kept as such at Baxa [Buxa in Assam] and at Dalhousie. The remaining 4,500 are working on roads and it could not, therefore, be said that all the Lamas were being maintained by the Government of India without doing any work. The Dalai Lama explained that the number of genuine Lamas would not be much less than those who are being maintained at Baxa and Dalhousie and requested the Government of India to ensure that nothing was done to come in the way of their following their religious pursuits-meditation etc.
The Prime Minister agreed.
Posted by Claude Arpi at 6:43 AM