A Dinner with the Third King of Bhutan 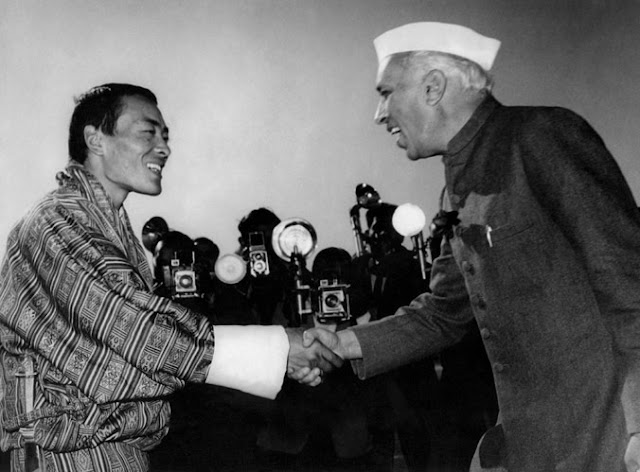 This month, India and Bhutan are celebrating the 50th anniversary of their diplomatic relations.
On this occasion, I post a note written by Jawaharlal Nehru, the Prime Minister of India on January 20, 1954 after a dinner with the King of Bhutan.
Jigme Dorji Wangchuck (2 May 1929 – 21 July 1972) was the Third Druk Gyalpo. He is credited with opening Bhutan (or Druk, the Land of the Dragon) to the outside world, to have started the modernization process and have taken the first steps toward the democratization of his country.
In September 1958, Nehru would visit him in Paro, crossing over the Chumbi Valley.
See my post of the subject.

The Dinner
At one point during the dinner in 1954, Nehru said that India was “friendly with China and there was no reason to think that between India and China there would be any conflict.”
This was of course a serious misjudgment.
Nehru however rightly pointed out that the foreign affairs of Bhutan “was a vital matter for India.”
Though Bhutan is now a fully independent nation, what is happening in Bhutan remains ‘vital’ to India.
Later in the evening, Nehru spoke of a survey of the Manas river for a hydro-power project; the Gyalpo was not fully convinced. Nehru added: “As for a survey, he [the Gyapo] said that permission had been given within a limited area. I [Nehru] said that this was not good enough and that the survey should have to take into consideration broad areas. He said he would consider this matter further.”
This would eventually lead to the survey of the trijunction between Tibet, Bhutan and Sikkim (Batang-la area) two years later by TS Murty, an officer of the Indian Frontier Administrative Service (with a team of the Survey of India).
It would then be realized that the trijunction was Batang-la, not Gyemochen (or Gipmochi).
A large collections of documents on the relations between Bhutan and India are available on my website.
Here is the link...

Here is Nehru’s Note dated January 30, 1954:
I had a long talk with the Maharaja of Bhutan after dinner to-night. The Maharani was asked to join us after some time at the instance of the Maharaja. According to him this was desirable as he did not always understand what I said and the Maharani's knowledge of English would help.

2. I expressed my pleasure at their visit to India which had enabled us to know each other better and also given them an opportunity of seeing a bit of India. I was sure that this would lead to greater understanding and fuller co-operation.

3. The Maharaja entirely agreed and thanked me for all the friendliness shown to him here. He said that Bhutan's relations had been friendly with India even in British times, and now they were friendlier.

4. I then mentioned very briefly the difficulties and tensions of the world and the possibility of even distant countries being affected by them. Bhutan had kept an isolated existence in the past and, for my part, I thought that this was a wise policy then, otherwise the British Government would have interfered a great deal. But conditions were very different now because of various happenings. The world was a much tighter place to live in, and the Tibet-Bhutan-India frontier was much more important now. We had, therefore, to take a broader view of the present as well as the future and it would become progressively more difficult for Bhutan to remain isolated. We had no desire to interfere in the internal government of Bhutan, though we were, of course, interested in Bhutan's progress and the well-being of her people. But, we were very greatly concerned with anything affecting foreign affairs and defence of Bhutan. It was for this reason that in our last Treaty [of 1949] it had been mentioned that the foreign affairs of Bhutan should be conducted with the guidance of India. Foreign affairs were intimately connected with defence. A wrong step by Bhutan in either of these matters might land us in difficulties. Therefore, there has to be the fullest co-ordination between Bhutan and India in regard to foreign affairs and defence.

5. In so far as Bhutan was concerned, the only two countries that affected her were India and China (or Tibet). We were friendly with China and there was no reason to think that between India and China there would be any conflict. Nevertheless, one must not leave things to chance and it was in the interest of India and Bhutan both to co-ordinate their defence and foreign policy. I mentioned that, even in the case of Nepal, this was our understanding. Indeed, India's real defence lay in the Himalayas. Any intruder coming into Nepal or Bhutan would weaken that defence and we could not tolerate it.

6. I developed this point rather fully. The Maharaja said that they quite understood that in regard to foreign policy India should be interested and they would give every consideration to what India said in this matter. I again pointed out that this was a vital matter for India.

7. I referred to our previous suggestion about having an Agent in Bhutan and said that this would help greatly in furthering our co-operation. It would be helpful to Bhutan in many ways and, in any event, we would be in direct contact which was so necessary. The Maharaja referred to past history and said that his National Assembly had not viewed this with favour but he was prepared to consult them again. He said that he was in constant touch with Mr. [BK] Kapur [the Political Officer in Sikkim]. I said that this was right, but, it would be advantageous to have an Indian Agent in Bhutan. I had no desire to press this against the will of the Maharaja and the Bhutan Government. But I did not understand why the Maharaja or his Government should be apprehensive in this matter. That showed a certain lack of confidence in us. We should proceed on a basis of accepting each other's bona fides and having confidence in each other. I left it at that.

8. I discussed internal conditions in Bhutan, the land system, the Nepalese there etc. The Maharaja said that there were no big zamindars there and land was owned by peasant proprietors who were happy and prosperous. There was no trouble with them. There was also no trouble with the resident Nepalese in the valleys, though two or three outsiders had come and tried to create some trouble.

9. I referred to the survey of the Manas river. He said that this matter had been raised in his father's time who thought that if a dam was constructed, the backwash of it would be injurious to Bhutan. I pointed out that the first step was a survey. Nobody could say now whether this survey would lead to the construction of a dam, and, in any event, no such decision could be taken without the consent of the Bhutan Government. As for a survey, he said that permission had been given within a limited area. I said that this was not good enough and that the survey should have to take into consideration broad areas. He said he would consider this matter further.

10. I then referred to the foreign exchange question and said that we had to be very careful about this so as not to waste it. Generally speaking, Bhutan should be able to get her requirements from India. Where this was not possible and something was specially wanted from abroad, there would be no difficulty in our arranging for foreign exchange. I suggested that we might have a minimum figure (I did not mention the figure) for foreign exchange. Any addition to this, if necessity arose, we would consider favourably.

11. The Maharaja referred to the necessity for free trade between Bhutan and India. He said that this had been more or less agreed to by Mr Harishwar Dayal [previous Political officer] at the time last Treaty was framed [1949]. It was then said that this might be left out of the Treaty but would nevertheless hold good. As a matter of fact, there were tell gates right near the frontier with West Bengal, and each truck was charged at the rate of Rs. 5 for round trip. This affected contractors on the Bhutan side. I told him that I knew nothing about this and no mention of this had been made previously. This question had better be discussed with our officers.

12. This was the substance of my conversation. Towards the end, the Maharaja again expressed his happiness at having come here and established personal contacts.

Copies were sent to the Secretary General of the MEA, the Foreign Secretary and the Joint Secretary.