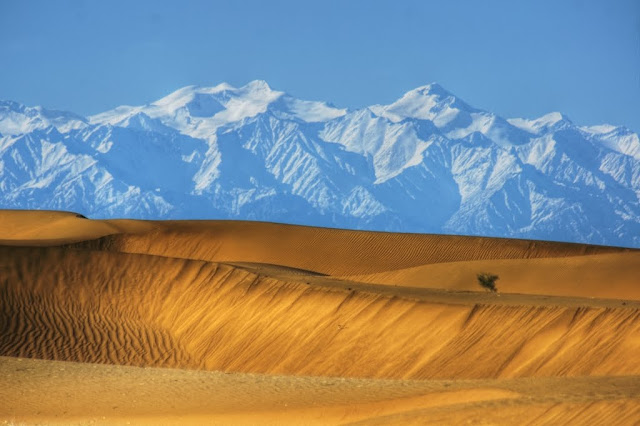 Linking Xinjiang to south Asia seems to be a new dream for the leadership in Beijing.

After focusing for years on Lhasa and southern Tibet, Beijing has decided to invest in the development of western Tibet, known as the Ngari Prefecture of the Tibetan Autonomous Region (TAR). Despite the 2015 Nepal earthquake which delayed the building of infrastructure in the area, particularly the railway line Lhasa-Kyirong at the Nepal border, the work has now started at an accelerated pace.

Economic angle
One project which could have serious strategic implications for India is the extension of the National Highway G216 from Xinjiang to Kyirong landport; linking Xinjiang to south Asia seems to be a new dream for the leadership in Beijing. Though technically it is a formidable challenge to cross the Kunlun range, the Chinese engineers are determined to implement the scheme.
This could also have immense economic consequences as it may become the main conduit of a new Silk Road from Central Asia to Nepal and South Asia. Has India been taken into the loop when Prime Minister Narendra Modi "informally" met the Chinese president recently? It is doubtful.
Meanwhile, western Tibet develops fast. In January, VTIBET.com reported that the Ngari prefecture received over 6,60,000 visitors in 2017. The statistics released by the Ngari Tourism Bureau website said that it was a 20 per cent growth compared to the previous year. Even the revenue increased.
“The tourism revenue totalled about 750 million yuan, up by 10 per cent over the same period last year.” The website cites the prefecture’s marvels: the Kailash Manasarovar area, the ruins of the former Guge Kingdom and the Tholing Clay Forest — all located in Ngari Prefecture.
Last month, Radio Free Asia (RFA) announced that the Chinese authorities have seized farmland in Lhatse to build a new airport, “displacing Tibetan villagers and offering far less in compensation than the land is worth”. RFA argued that the land belonged to Yushang village in Shigatse prefecture’s Lhatse county.
Apart from the deprivation of the land, the news item shows that in the years to come, Western Tibet could become the new economic and touristic hub and, of course, an important strategic centre for the defence of China’s borders. The opening of a new airport should be seen in this perspective, though the rapidly increasing trade with Nepal shouldn’t be ignored.
According to Tibet Business Daily, the total value of Tibet’s foreign trade exceeded 5.8 billion yuan (nearly Rs 6,700 crore) in 2017. “The domestic economy has been steadily improving, and the demand for international market has generally recovered,” noted the daily.
Nepal is the main recipient of Tibet’s exports. In April, Nepal’s foreign minister, Pradeep Gyawali, visited Beijing. After meeting vice-president Wang Qishan and his Chinese counterpart Wang Yi, he spoke of “expediting past agreements, developing trans-Himalayan multidimensional transport network and building a China-Nepal-India economic corridor.”
Gyawali noted that China is Nepal’s genuine friend and a trusted ally. “We should build on the excellent roots of civilisational, geographical and cultural affinities to further connect our countries and societies.” This new civilisational bond between China and Nepal explains the need of a new airport in Lhatse.

Difficult terrain
China Tibet News Network mentioned another megaproject, the "extension" of the G216 Highway which, according to the article, will end in Kyirong. What does the extension of G216 mean?
In 2016, a "Public Announcement for the Environmental Impact Assessment (EIA) of G216 (Tibet Area)" was made. The original 857-km-long highway starts from Altay City in northern Xinjiang and ends in Baluntai (in Hejing County). It will now be extended via Minfeng and Keryia in southern Xinjiang to western Tibet and Nepal.
Needless to mention the immense technical challenge to cross the Kunlun range between Keryia and Rutok where the road will join the G219 or Aksai Chin road. To give an idea, Keryia is located at 1,459m sea level, while Lake Lighten on the plateau is at 5080m (a 3,500m climb in less than 200km). It is perhaps the most difficult terrain in the world.

Crazy dream
The last section of the "extended" G216 (towards Nepal) will have a length of about 94km; the geological conditions are complex, said a Chinese website: “After experiencing the May 12, 2015 earthquake in Nepal, the geological conditions are even more unpredictable. The original roads at the Kyirong Port have been seriously damaged, and the subgrade has subsided in some sections.”
The main bridge in this section is said to have collapsed “and the road surface was broken and cracked.” Kyirong is located 24km away from the Nepal border; it is now the main channel for land trade between China and the former kingdom.
Due to the earthquake, the railway line between Shigatse and Kyirong has been delayed by at least three years. After the earthquake, one section of the G216 slipped and is no longer accessible. The road from Kyirong to the border with Nepal is only a dirt road. “When the rainy season arrives, disasters such as landslides and mudslides are frequent.”
The point remains that if the terminal section of G216 towards Kyirong is difficult, it is nothing compared to the section which will try to cross the Kunlun range, north of Lake Lighten. One more crazy dream of the rulers in Beijing?
Or a visionary project in view of the importance of having a second Xinjiang-Tibet highway (after the Aksai Chin road built in the early 1950s)? Could it be a true New Silk Road linking Central Asia to South Asia via Nepal? It is difficult to say today. The engineers have to cross the Kunlun first. India should watch the developments.
Posted by Claude Arpi at 6:24 AM