As Beijing intensifies the implementation of military/civilian doctrine, particularly media manipulation, India must stand prepared. Information will be an important part of any battle of tomorrow

In 2003, China’s Central Military Commission approved the concept of ‘Three Warfares’, namely: (1) the coordinated use of strategic psychological operations; (2) overt and covert media manipulation; and (3) legal warfare designed to manipulate perceptions of target audiences abroad.
In recent months, Beijing has been intensifying the implementation of this military/civilian doctrine, particularly ‘media manipulation’.
Take the example of an article published last week in The South China Morning Post. It speaks of “large-scale mining operations on the Chinese side of the border with India where a huge trove of gold, silver and other precious minerals has been found.” It argues that it “may create a new military flashpoint with India.”
Though no large-scale mining has yet been spotted in Lhuntse County, north of Arunachal Pradesh, the writer connects it with the Chinese claims in the area: “People familiar with the project say the mines are part of an ambitious plan by Beijing to reclaim South Tibet [the Chinese name for Arunachal], a sizeable chunk of disputed territory currently under Indian control.”
The article mixes the Longju border incident in 1959, the 1962 war with India, the Chinese claims and the supposedly huge deposit of rare earths. The sad part of the story is that the article was immediately copied and pasted by PTI and the next morning, the entire Indian media reported about the issue and linked the happenings on the Tibetan plateau with the Chinese advances in the South China Sea.
Ironically, a day later, the ultra-nationalist Chinese tabloid, The Global Times, called the article “a dodgy report disturbing the Sino-Indian ties.” It said that the article had lit a firestorm but remarked that after Indian Prime Minister’s visit to Wuhan, the two countries have achieved major progress in strengthening mutual trust, further it said China “has no intention of provoking border disputes”.
The Global Times added that though: “the report severely lacked factual evidence and was coarse,” the Indian media “was extremely excited to see such a topic,” adding: “to many Chinese people, their first impression is that the report is not credible, given the vague facts, the geopolitical point quoted by a geologist and the denial by the expert.”
Whether it is an orchestrated move by Beijing to first plant a ‘dodgy’ piece, knowing fairly well that some Indian correspondents in Beijing are experts at copy-paste reporting, and later to throw water on the fire, is difficult to know.
It is not the first time that The South China Morning Post has done it. On October 29, 2017, Jack Ma’s newspaper reported that “Chinese engineers are testing techniques that could be used to build a 1,000km tunnel — the world’s longest — to carry water from Tibet to Xinjiang;” again the Indian media jumped to the bait. There is no doubt that India needs to be prepared for Information Warfare in the coming months. 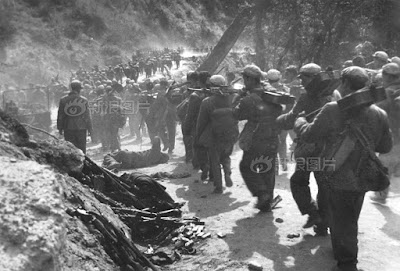 1962 War with India
Another favorite topic of the Chinese media propaganda has been the 1962 War with India. Beijing is keen to rewrite the narrative and sell it to lakhs of its citizens visiting South Tibet; its idea is to prove that India attacked China in October 1962.
At the end of October 2017, as an offshoot of the Doklam episode, Sina.com published an album of photos “to commemorate the 55th Anniversary of the Outbreak of the Self-Defense Counterattack.” Note that for Beijing, it is the ill-equipped and unprepared Indian troops who attacked the Chinese, giving China no option but to ‘counterattack’, killing hundreds of Indian jawans and officers in the process.
One of the photos, showing the People’s Liberation Army (PLA) parading in front of the Potala in January 1963, in Lhasa linked the 1962 War with the 2017 standoff in Bhutan: “The leader of the Chinese Communist Party, Mao Zedong, once estimated that India’s ‘embarrassment’ [of the 1962 War] could usher in 10 years of border security and peace. History has proved that the period of peacetime has been longer than estimated. Today, 55 years later, India once again provoked China.” The message was clear. At the time of the 1962 War, disinformation already existed.
In his Monthly Report for April 1963, the Political Officer in Sikkim informed New Delhi: “Early in the month it was announced by the Chinese authorities that the Chinese frontier guards in Tibet would be releasing 3,213 Indian prisoners which included amongst others one Brigadier [John Dalvi], 26 Field Grade Officers and 29 Company Grade Officers.”
The PO added: “The propaganda machine of the Chinese made out that the Indian prisoners were living in Tibet in a state of idyllic bliss. The detention camp was described as having been established in picturesque surroundings where the prisoners spent their time playing games or fishing and otherwise enjoying themselves. The food was supposed to have been so good that the prisoners had according to the Chinese statement on an average gained 1.35 Kgs per head. The nursing care received by the sick is supposed to have so overwhelmed the recipients as to have induced them to say that even their parents had not bestowed more loving care on them.”
The Indian PoWs reported the opposite; they ate only radish and immensely suffered during their months of captivity on the cold Tibetan plateau. Today, the Chinese propaganda is using the 1962 conflict to its benefit.
Che Dalha (alias Qizhala), the Governor of the Tibetan Autonomous Region (TAR) recently visited Zhayul, north of the McMahon line in the Lohit Valley. Some 50 km south in the same valley, the famous Battle of Walong took place in November 1962; here Indian troops and particularly the six Kumaon regiment of the Indian Army managed to stop the Chinese advances and paid a high price for it; the Chinese too suffered heavy casualties.
China has built a Hero Memorial Park to honour its deaths in Zhayul. During his visit, Che told the villagers that the masses should always cherish the memory of the revolutionary martyrs; he laid a wreath for 447 Revolutionary Martyrs at the War Memorial.
The story will now be told to thousands and thousands Chinese visitors, how ‘the Indians attacked our troops’. Incidentally, Che took the opportunity to urge the villagers to watch for strangers or suspicious persons (Indian?); he asked them to cross-examine them and send a report to the PLA manning the Indian border.
Another memorial stands north of the Thagla ridge in Tsona County. The Forward Command Post of General Zhang Guohua, who commanded the PLA operations in 1962, has been reconstituted and opened to tourists. It is located in Marmang village, the first hamlet north of the McMahon Line.
This gazetted national-level historical site also mentions the ‘Sino-India Self Defense Counter Attack Battles’, hotels are already mushrooming to receive the visitors.      ‘Information’ will certainly be an important part of any battle of tomorrow. Has India grasped this? Not sure. In the meantime, Indian journalists should scrupulously verify the facts when they write.
Posted by Claude Arpi at 10:28 AM