The Truth from the Dragon's Mouth 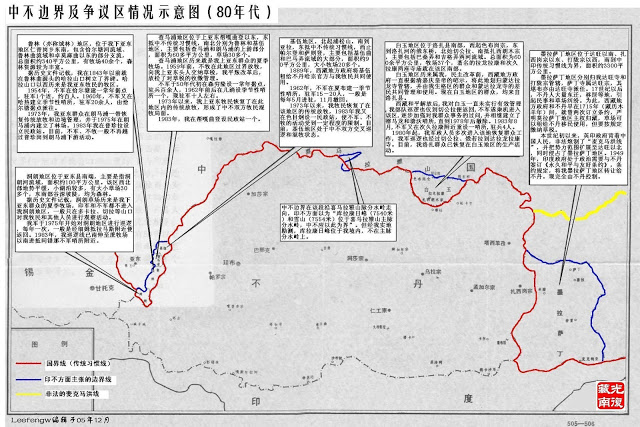 Recently a book Spying Against India (Chinese Military Intelligence from 1962 to 2012) Volume 1, written by one Ben Keiler (probably a nom de plume) was published by Amazon Kindle.
It is difficult to verify the veracity of the content.
However it complements the above map that I posted a few weeks ago on this blog (China ties to alter the status quo in Bhutan). 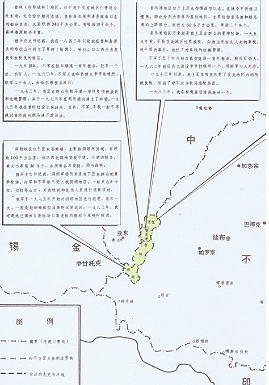 One Chapter of the book is entitled: The Western Territories of Bhutan
It explains that the above map is a copy of Top Secret Chinese Intelligence map.
(it copy was probably published to hide the embarrassing information about the Indian and Bhutanese camps inside the area today claimed by China)
The book publishes the originals along the translation of the accompanying texts and provides its own comments.

For example, this Chinese Intelligence map provides an overview of the disputed areas in Western Bhutan with detailed textual explanations.
The map is said to have been compiled by Chinese intelligence some 30 years ago.
The original maps with the positions of the Bhutanese and Indian Armies were obviously not published in China, as they contradict China's version of the historical background of the present standoff with India near the trijunction. 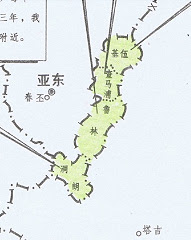 Here are details of the above map.
The present standoff between the Chinese and Indian Army is taking place in the Southern part of the map. 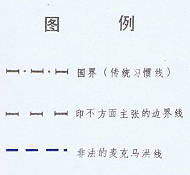 The legend for the map is interesting. It says:


The top text shows what the Chinese consider the international border.
The second text is what India and Bhutan consider as the location of the border.
The third is the “illegal” McMahon Line (in Eastern Bhutan - not shown on this particular map)

The fact that this area is shown in a separate colour (green), as well as the captions clearly demonstrates that the area was already disputed 30 years ago.
Today, China pretends that the area has always been Chinese territory! 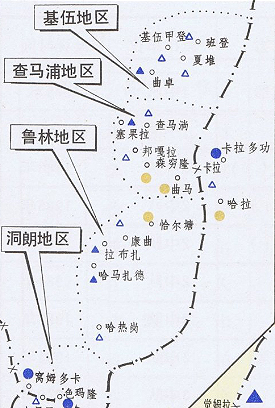 This map marked Document 67 shows that the Royal Army of Bhutan and the Indian Army were in control of the area in the 1980s.
Not a single post occupied by the Chinese Army is marked.
The PLA was nowhere to be seen.

Here is the legend for the above map :


Blue circle: Permanent base of the Royal Bhutan Army

Here is the translation of text on the Chinese text accompanying the Intelligence map (as well as it 'edited' reproduction; see map on the top of this post - top most text).


Luling (also called Ru-ling) area is located on southeast of the Rinchengang town, in the lower part of the Dro-mo [Lower Chumbi Valley].
The area includes some of the small rivers in the east of Dromo Machu, Charthang river and Luling river.
The size of the area is around 340 sq. km and there are more than 40 grasslands (pastures). The source [of income] comes from the products of the forest; it is pretty marvelous.
According to some historical documents, before 1843 China put border stone pillars on the hill of Ha-la, which is the source of the Luling River. [Nobody has ever heard of these 'pillars'; my comment].
The western part of the Ha-la Mountain’s range was in the past the pastoral area of the nomads of the Dro-mo [Chumbi].
In the year of 1954, the Bhutanese army permanently settled at Charthang for whole year. There were around 100 troops occupying the area.
In 1960, the Bhutanese soldiers came again and set up an Observation Post at Ha-rar with more than 20 soldiers. There were sent from the pasture ground of Charthang.
In 1973, the people of the Dro-mo [Chumbi] restored their control over the border area and managed to send their animals grazing like before in the upland region of Lang-ma.
Moreover, in 1975, we [China] established a forest park in the Langma’s upland.
In 1983, we [China] a set up a civil administration.
Now the soldiers and nomads of Bhutan do not enter the lower part of Lang-ma’s upland grassland by crossing the Phu-tren pass as before.

These facts contradict the Chinese propaganda: Beijing never maintained any army base, customs office or other government function in that area until 1983.
Further, according to the book Spying Against India:"If we go to the map [marked] as Doc 67 [above], we see the 1987 reality as reported by Chinese military intelligence: there are four bases by the Bhutanese army and one by the Indian army in that area alone. Those bases are located along the border and there is not one single Chinese base."
The author of the book further comments:


First no Tibetan from Yatung [in Chumbi Valley] or any other Chinese lived there or even went there. After some 20 years after the arrival of the Chinese army in Yatung, they start to send local Tibetans as ‘nomads’ with their cattle into that area to stake a claim. If those Tibetans are not expelled for some ten years, they open a small civil administration post which could be only an unmarked tent operated during summer. Again if that civil administration station is not demolished they start to make propaganda to claim this area has been Chinese territory since ancient times.

Perhaps more interesting is the Chinese description of the place where the conflict is presently going on. Here is the translation of the text:


Tunglang (Doklang) area is located in the south, moreover the valley of Tunglang river is an area of more than 100 sq. km.
Northern parts of that area are plain with lots of lakes and there are more than 30 small and big grassland.
Southeast are mostly forest with steep mountains and deep valley.
According to the historical documents, Tunglang grassland is the summer pastoral area of the people of Lower Dro-mo [Lower Chumbi] region and the army of India and Bhutan both are not entering into the Tung lang area. They just observed to the nomads and people from a big stone.
From the year of 1975, China’s armies went around very carefully, almost once a every year.
Generally after we (Chinese) reached near to the Lhamasi through Shismo, we [China] returned back.
In 1983, the boundary line of our observation was expanded towards the south and later it was getting nearer to the Observation Post of the Bhutanese army in Dung-Tsona in South of Trae grassland.

The author of the book rightly notes: "The names and areas of those disputed territories are not identical in China and Bhutan. Therefore if the Chinese talk about Tonglang it’s not identical in size and geographical location to what the Bhutanese and Indians called Doklam."
He points out at the contradiction in the Chinese Intelligence documents: "a second and different Chinese story appears is in Doc 67 where Chinese intelligence marks one base of the Bhutanese army clearly inside that very area and two more at the border."
See the legend above.

The book Spying Against India says: 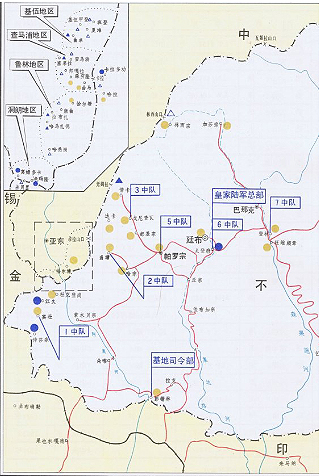 In Doc 70, we can see the deployment of Bhutanese and Indian army units in western Bhutan in 1987. The first Battalion of the Bhutanese army defends the area close to the border with Sikkim.
In that location they make sure the Chinese army cannot take any shortcut through Bhutanese territory and cut-off and encircle the Indian border defense in the northern areas of Sikkim.
The 2nd, 3rd and 5th battalions were positioned to defend the area between Yatung and the capital Thimphu.
The 6th battalion serves as reserve force and can be deployed in any direction. The Indian troops are intermixed with the Royal Army of Bhutan to strengthen the defense but also to make sure the Chinese army cannot enter any area of Bhutan without fighting the Indian Army. This mix makes sure the Chinese cannot only target the Bhutanese army and grab more land without killing Indian soldiers.

This was in 1987.
All this shows that the situation is far more complicated than the one showed in the recent Chinese statement.
In other words, the PLA has blundered in entering Indian territory, a place that a few decades ago, China did claim as its own. Today,  at best for Beijing, it is today 'disputed'.

It also shows the Chinese way of claiming new territories.
They first send grazers. If not objected, the grazers would visit every year.
Then a small patrol is sent.
The following year a tent (representing the Civil Administration) is planted.
After a few years, it becomes "Chinese territory administrated by China since immemorial times".
Posted by Claude Arpi at 3:22 AM