How can Xi speak of a 'Chinese Dream' and a 'Peaceful Rise' while threatening those who dare oppose China? 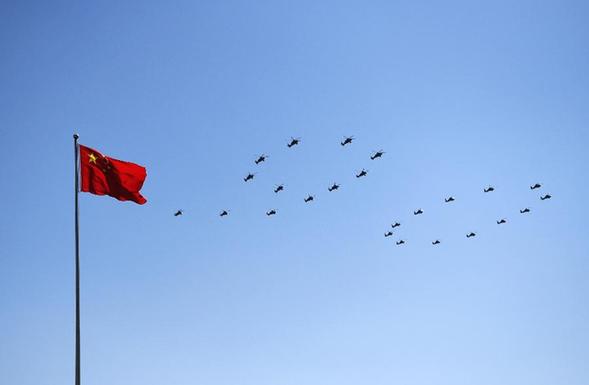 My Article How can Xi speak of a 'Chinese Dream' and a 'Peaceful Rise' while threatening those who dare oppose China? appeared in The Mail Daily (UK)

“You shall be unswervingly loyal to the absolute leadership that the party has over the army, heed the call of the party, follow the party,” asserted Chairman Xi Jinping, while officiating during a mega parade at the Zhurihe Combined Tactics Training Base in Inner Mongolia on the occasion of the 90th anniversary of the People’s Liberation Army (PLA).
Images showed a martial Chinese President, also Chairman of the Central Military Commission, by far the most powerful organization in the Middle Kingdom, dressed in combat fatigues, driving in an open jeep and inspecting some 12,000 combat troops.
Xi told the PLA to be prepared for the battle and to defeat ‘all enemies that dare to offend’ China. Was India, who had dared to challenge the mighty PLA when Beijing tried to change the status-quo at the trijunction between Tibet, Bhutan and Sikkim, targeted?
According to The South China Morning Post, “Xi didn’t specify any target”, though the defence ministry spokesperson Ren Guoqiang stated that the parade was not targeted at China’s ‘surrounding situation’, it was in accordance with the yearly training schedule.”
Zhurihe is China’s largest and most advanced military base, sometimes compared to Fort Irwin National Training Centre in the US. It was the first time that such a military parade was held outside Tiananmen Square in Beijing, “it differed from previous events in its heavy emphasis on combat and field operations,” noted the Hong Kong newspaper.
It was indeed a huge display of military power; Xinhua reported that some 40 per cent of the weapons on show had never before been seen by the public.
Xi told the troops: “You shall extend the battleground to wherever the party points towards. …The world under heaven is not at peace, and peace needs safeguarding.” Xi added: “We are closer than at any time in history to realising China’s great dream of national revitalisation, and building a strong people’s army.”

A Contradiction
There is a contradiction here, which might become a serious problem for Xi.
Can Xi speak of a ‘Chinese Dream’ and a ‘Peaceful Rise’ while threatening to go to war against those who dare to oppose China?
A war would undoubtedly take China 50 years back in its development.
The PLA in the meantime continues to take giant steps towards the future.
At the beginning of 2016, Beijing undertook in-depth reforms of its defence forces, aiming at a far wider 'integration'.
Apart from the traditional three 'services'; the PLA's Army, Navy and Air Force, the PLA has now a Rocket Force (formerly, the second artillery) and a Strategic Support Force (SSF) which could be a game changer.
It could be a critical organisation for dominance in the space, cyber, and electromagnetic domains. It is certainly the force to watch.

China is looking into the future
China's military modernisation will include capabilities to attack, at long ranges, adversary forces that might deploy or operate within the Western Pacific Ocean.
An array of weapons, for example different types of missiles, such as the new HQ-19 missile, to be specifically used for intercepting ballistic missiles in mid-course, are being developed. China is also working on an unmanned combat aerial vehicle named the 'Black Sword', which could one day compete with the best US drones.
But there are other aspects that one can’t ignore.

Not all is rosy in China today.
According to a blog on The People’s Daily website, on July 26 and 27, the days before Xi Jinping met the National Security Advisors of the BRICS, a seminar was held in Beijing; the purpose was to ‘unify the understanding among Party members’.
Chinascope, a website which publishes translations and analysis of the Chinese media, pointed out that the meeting was different from the ones held during the previous years: “First, the seminar location was changed from the Party School to the Jing Xi Hotel”. This hotel, closed to foreigners, is located near the Military Museum and Defense Ministry and is run by the PLA’s General Staff Department. Why was the location changed? Is Xi more ‘secured’ under the PLA wings?
It was also different due to the large participation of Party cadres; it included the seven members of the Political Standing Committee, provincial Party bosses, top leaders from central government, representatives of the People’s Congress, the judiciary and of course the PLA.
A telling detail: no paper and no pens were seen on the tables.
In his speech, Xi noted that he was ‘aware of the challenges’ and remarked: “the world is undergoing a dramatic change while China is facing serious challenges. …How do we deal with the complexity of the world and gain control on the international stage? How can we seize the opportunity and break through the conflicts and risks as China is entering a critical development stage? How can the party overcome the tests and risks and continue to be the leading party of the country? … These are the important questions that the party members are responsible for answering.”
During the next few days, the leadership will move to the cooler seaside resort of Behaide. It does not mean that the atmosphere will be less steamy.
The battle for the 19th Congress seems to have started.
The PLA is bound to play an important role in the power struggle at the top of the Party. We will have to wait a few months to witness in which direction the smoke goes. In the meantime, the PLA, 90 years after its Foundation, seems very much behind its Chairman.
The confrontation in Doka La should be seen in this perspective too.
Posted by Claude Arpi at 8:10 AM