I have often mentioned on this blog, The Three Warfares, more particularly the Propaganda/Information Warfare.
Today China believes that it has mastered the Art and that it has demonstrated it in brainwashing many Indian journalists in the wake of the Doka La confrontation, near the trijunction between Tibet, Bhutan and Sikkim.
This may have been true during the first weeks in view of the of the paucity of information (and knowledge) from the Indian side.
Propaganda (or disinformation) has always taken an important place for the survival of a totalitarian regime. It continues today, whether it is with North Korea or China.
During the 1962 Sino-Indian conflict, the Indian POWs in Tibet were subject to the heavy Maoist propaganda machine. Unfortunately in most (not to say all) of the cases, it did not work.
Today, the Chinese are probably attempting to brainwash the Indian soldiers on the ridge on the heights of the trijunction in Bhutan.
If they do, they are again bound to face a failure once again…
The Indian jawans is just not brainwashable!

Here is the account of a young captain who was taken to Tibet as POW war in October 1962. He recalls his days in the camp in the Yarlung Valley.
Note that I had earlier posted another account of the Indian POWs in Tibet on this blog. 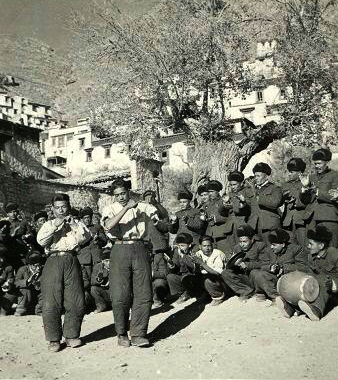 You're right about brainwashing. But you should not dismiss another dimension in the methods used by China. There are ears within the Indian establishment that are sensitive to China's current discourse. It is always useful for China not to neglect these ears. But beyond that, future wars will have other forms: to categorize the perceptions of the enemy society, to dissuade for fear of escalation. And the positions taken by the Chinese Ministry of Defense, the military maneuvers of the PLA are certainly in this perspective.