For the CIA Batang La is the Trijunction

Yesterday the Chinese Ministry of Foreign Affairs' spokesperson Hua Chunying continued to rant about India's presence in Bhutan near the trijunction Tibet-Sikkim-Bhutan. Commenting on Home Minister Rajnath Singh's declaration that a solution to the standoff in Western Bhutan was in view, she said:"We hope that India can match its words with actions and immediately withdraw its troops and equipment that have encroached into Chinese territory."
She was speaking of an area which is Bhutanese territory.
But this did not stop Hua to reiterate that India should withdraw its troops: “the prerequisite and basis for resolving the incident is that India immediately and unconditionally withdraws its trespassing border troops and equipment to the Indian side of the boundary.”
She accused the Indian troops of having “illegally crossed the delimited boundary which has been recognized and abided by for nearly 130 years by both China and India. …The Dong Lang (Doklam) area is undisputed Chinese territory, noting that India's intrusion into Chinese territory under the pretext of China's road building lacks legal grounds and India's arguments are simply untenable,” said Hua who concluded: “if China feels that India's infrastructure construction in border areas threatens Chinese security, China can openly send troops to Indian territory to stop it.”
She further warned that if India's absurd logic is tolerated, international norms will be undermined.
High-pitched rhetoric is only to hide the fact that Beijing blundered in trying to unilaterally change the status quo and put Bhutan and India in front of a fait-accompli.
The area is not Chinese and has never been Chinese territory.
For decades Bhutan and India have patrolled this area (see my article The Truth from the Dragon's Mouth).
Interestingly, a map published by the CIA in 1965 shows clearly the reality the situation on the ground: Batang La is the trijunction.
The report which contained the map was released by the US agency in 2003. China never protested. 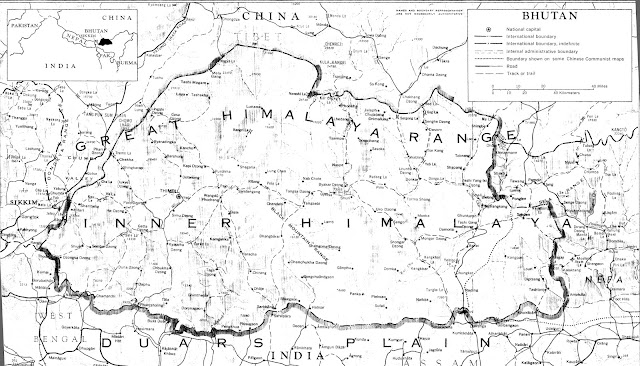