A Train to Chumbi Valley? 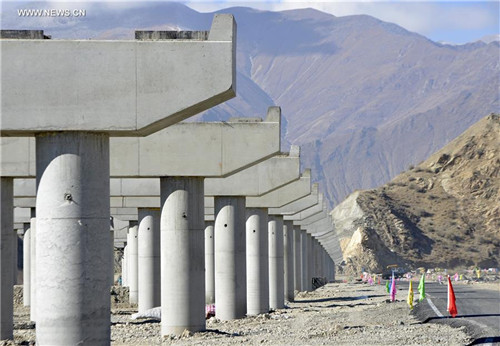 A Tibetan website has just announced that the Mila (spelt ‘Mira' by the Chinese media) tunnel will be opened on June 30.
According to Tibetonline.cn, at an average altitude of 4,740 meters, this will become the world's highest highway tunnel. It will eventually cut the journey between Lhasa and Nyingchi (or Nyingtri) by some four hours.
The website says: “The tunnel has a longer-than-average length with 5,727 meters on the left and 5,720 meters on the right.”
The Mila Mountain lies at the border between the Lhasa Municipality (Meldro Gungkar County or Mozhugongka Xian in Chinese) and the Nyingchi Prefecture (Kongpo Gyamda County).
Located at an elevation of 5013 meters above the sea level, it is the highest point on the Nyingchi–Lhasa highway, a section of National Highway 318 (the 5400-km road between Shanghai and Zhangmu at the Tibet-Nepal border).
The plan to build a tunnel on this section of the road was announced in January 2015. Construction started just after.
Tibetonline.cn adds: “Affected by the high altitude, the tunnel project encountered many difficulties during the construction process. Rocks surrounding the tunnel's exit are very loose, and it is very cold in the tunnel with considerably thin oxygen. The minimum temperature in winter reaches minus 30 degrees Celsius.”
Wang Liang, chief engineer of the project affirmed that the travel time between Lhasa and Nyingchi will be reduced from eight hours to three or four hours, after completion of the project.
Can you believe it? Quite a feat.
Wikipedia described the area thus: “The west of the mountain is dry and cool, while the east side is warmer and has more moisture, and therefore has richer vegetation. The foothills have natural pastures and farmland. Trees include Yunnan pine birch and fir. Wildlife includes roe deer, antelope and bear.”

More and more tourists on the plateau
A few days back, Kangba TV reported that “over 23 million domestic and foreign tourists visited Tibet Autonomous Region (TAR) in 2016, up by 14.8%, creating a tourism revenue of 33.075 billion yuan, up by 17.3%.”
Whether the figures are accurate or not, it is certain that Tibet is very popular with the Chinese holiday-goers.
The government in Lhasa also announced that in 2017, it will give “priority to building 4 national region-based tourism demonstration areas, including Lhasa City, Nyingchi City, Shigatse City and Purang County in Ngari area as well as 4 TAR-level region-based tourism demonstration areas, including Chengguan and Tohlung Dechen districts in Lhasa, Kongpo Gyamda County in Nyingchi and Pome County.”
It has to be noted that Purang is near the trijunction between India, Tibet and Nepal. The Kailash Yatra via Lipulekh-la passes via Purang (also known as Taklakot).
There is no doubt that Ngari will be the next area to be developed on a grand scale for tourism.
Lhasa also said that in 2017 the TAR plans to receive at least 25 million tourists, providing 380,000 people with jobs in the tourism sector.
But jobs for whom?
For Han migrants or local Tibetans?
It is obviously not mentioned by the authorities in Lhasa.

Tibetan Culture and Infrastructure
Interestingly, Communist China has recently discovered Tibetan culture.
The Chinese embassy in Kathmandu even hosted a special function for celebrating Losar, the ‘Chinese Tibetan Losar’ (sic).
Chinese Ambassador Yu Hong said that Losar is the most ‘ceremonious’ traditional festival of Tibetan people; she extended her “sincere wishes and greetings to all the Tibetan compatriots living in Nepal, and pay tribute to all the friends for your care and support for the development of Tibet."
Interestingly Madam Yu spoke of the railway connectivity between Nepal and China and noted that a train recently operated between Guangdong province, Tibet and Middle-South Asia; it started from Guangzhou, went to Lhasa, Kerung [Kyirong] to Kathmandu, covering a total length of 6,070 km and becoming the first highway-railway combined transport channel linking Guangdong, Tibet and Nepal.
She told the Tibetan 'community' in Kathmandu: "Our fellow Tibetan compatriots, despite living in a foreign land, always concerned about the progress and development of the motherland, and have made contribution to national unity and ethnic solidarity.”.
Another website VTIBET.com quoted figures from the TAR’s Development and Reform Commission: “Data show that Tibet speeds up and strengthens quality of traffic construction.”
It says that the TAR has spared “no efforts to solve the bottleneck problems restricting the development of traffic infrastructure.”
In 2016, the total distance of road opened to traffic in Tibet reached the staggering figure of 82,500 kilometers; the website also mentions the work on the Sichuan-Tibet Railway and the Yunnan-Tibet Railway undertaken during the 13th Five-Year Plan: “the Civil Aviation opened 71 air routes of domestic and international with 41 navigable cities, significantly increasing comprehensive transport capacity. The fixed-asset investment of Tibet's communication and transportation accumulatively achieved 40.21 billion yuan."
In 2016, China started to build 44 key highway projects.
It also asserts: “Tibet's railway construction projects invested about 8.5 billion yuan in 2016, of which the work of Nyingchi-Kangting section of Sichuan-Tibet Railway [in fact probably the Chengdu-Ya’an section of the line], Lhasa-Meldro Gungkar Railway [part of the Lhasa-Nyingchi line], Shigatse-Gillon [Kyirong at the Nepal border] Railway, Bomda [Pome]-Shangri-la section of Yunnan-Tibet Railway, and the earlier stage of Shigatse-Yadong [Yatung] Railway is proceeding orderly.”
It means that the project to take the train to the Indian border near Sikkim (in the Chumbi Valley) is still on, though at its ‘early stages’.
The website continues: “For Civil Aviation's part, Tibet has 5 navigable airports, 9 aviation companies operating in Tibet. It safeguarded 39,000 sorties of take-off and landing flight last year, received 4.05 million of the annual passenger and 30,000 tons of cargos and parcels.”
The shortening to the journey between Lhasa and Nyingchi, the new railway lines to Yatung and Kyirong have serious strategic implications for India.
Why is the Indian press keeping silent about this?
The answer is that many in India believe that if China dares to cross the McMahon line and walk down in Arunachal, it will 'break its teeth' in the Indian roads.
It is not 100% sure. 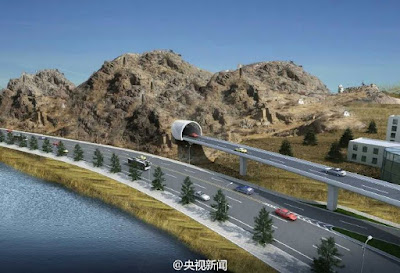 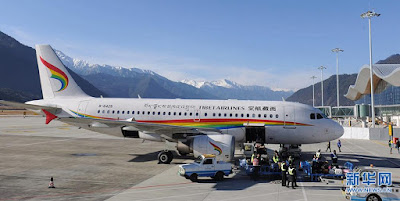 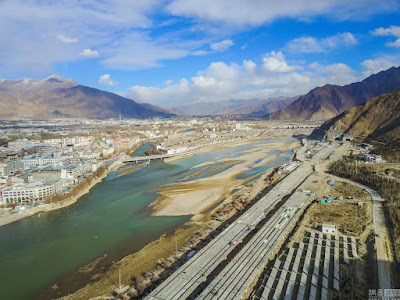 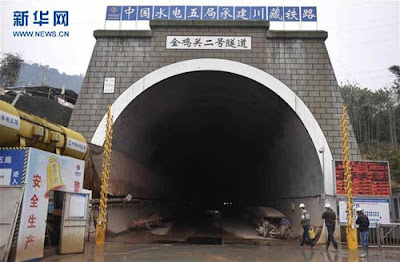