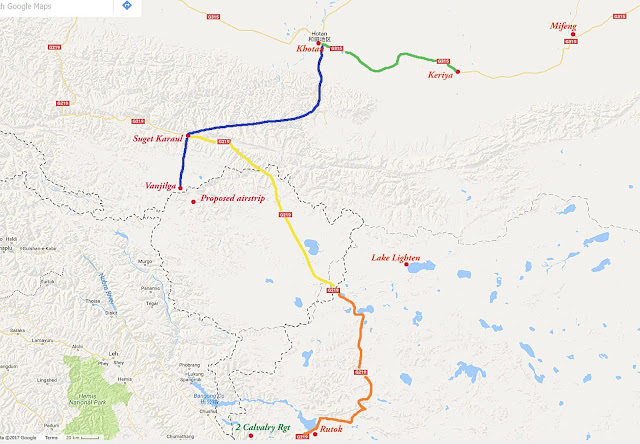 One of the Nehru Government’s biggest historical blunders has been the Aksai Chin road built by China on Indian soil without Delhi noticing it.
Among the several lakhs of recently released historical documents by the Central Intelligence Agency (CIA), a couple of Information Reports dating from 1953 bring some light on the issue.
Let us look at some facts.
On October 6, 1957, a Chinese newspaper, Kuang-ming Jih-pao reported: “The Sinkiang-Tibet – the highest highway in the world – has been completed. During the past few days, a number of trucks running on the highway on a trial basis have arrived in Ko-ta-k’e in Tibet from Yecheng in Sinkiang [Xinjiang]. The Sinkiang-Tibet Highway… is 1179 km long, of which 915 km are more than 4,000 meters above sea level; 130 km of it over 5,000 meters above sea level, with the highest point being 5,500 meters.”
The reporter spoke of: “thirty heavy-duty trucks, fully loaded with road builders, maintenance equipment and fuels, running on the highway on a trial basis” heading towards Tibet.
The Aksai Chin road was opened. It should have been obvious, even for the blind Intelligence Bureau Director, B.N. Mullick and others in Delhi that the Chinese had built a road on Indian soil; still, it took nearly two more years for the news to become public in India.
Early 1958, five months after the ‘official’ opening, Subimal Dutt, the Indian Foreign Secretary wrote to Nehru: "there seemed little doubt that the newly constructed 1,200 kilometre road connecting Gartok in Western Tibet with Yeh [Yecheng] in Sinkiang passes through Aksai Chin."
Dutt suggested sending a reconnoitering party ‘in the coming spring’ to find out if the road had really been built on the Indian territory.
The next day, Nehru agreed for the reconnoitering party, but added: “I do not think it is desirable to have air reconnaissance. In fact, I do not see what good this can do us. Even a land reconnaissance will not perhaps be very helpful.”
The Prime Minister then suggested: “our maps should be sent to the Chinese. …But I think it would be better to do this rather informally.”
Indian territory had been occupied but the Prime Minister wanted to remain informal about it.
Eventually the reconnoitering party went and while some jawans were captured, several others were killed. 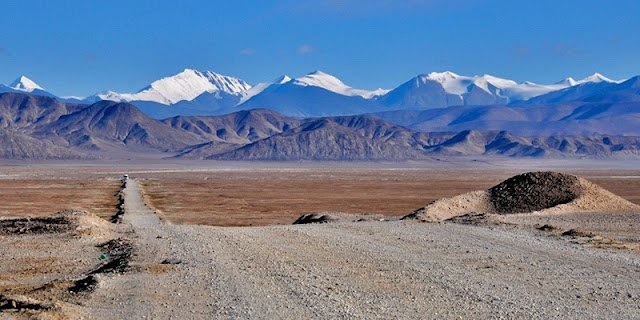 On October 18, 1958, the Indian Foreign Secretary handed over an 'informal note' to the Chinese Ambassador in Delhi: “The attention of the Government of India has recently been drawn to the fact that a motor road has been constructed by the Government of the People’s Republic of China across the eastern part of the Ladakh region of the Jammu Kashmir States, which is part of India.”
While detailing the route of the road, Dutt reminded China about India’s ‘old established frontiers'. The Foreign Secretary’s conclusion was: “It is matter of surprise and regrets that the Chinese Government should have constructed a road through indisputably Indian territory without first obtaining the permission of the Government of India and without even informing the Government of India.”
Indeed, it was regrettable.
Delhi was ‘furious’; the Chinese workers who constructed the road did not have a proper passport and visa: “No applications for visas from Chinese personnel working on the road or from Chinese travellers traversing this road have ever been received by the Government of India,” says the note which continues in a surreal tone, “as the Chinese Government are aware, the Government of India are anxious to settle these petty frontier disputes so that the friendly relations between the two countries may not suffer.”
Till today, the ‘petty’ dispute still continues to spoil the Sino-Indian relations.
But that is not all. A year later, Prime Minister Nehru hid the truth in the Parliament. The issue first came up on April 22, 1959 during a discussion on Chinese maps displaying Indian territory as China’s.
An MP, Braj Raj Singh queried: "May I know whether Government's attention has been drawn to the news item published in several papers alleging that the Chinese have claimed some 30,000 sq. m. of our territory and they have also disputed the McMahon line?" This was clearly related to the Aksai Chin as well as the eastern sector.
Nehru answer: “I would suggest to Hon. Members not to pay much attention to news items emanating sometimes from Hong Kong and sometimes from other odd places. We have had no such claim directly or indirectly made on us.”
The Prime Minister deliberately ‘omitted’ to mention the Aksai Chin.
It was only in August 1959 that Nehru dropped the bombshell in Parliament: the ‘Tibet-Sinkiang highway’ had been built through Indian territory.

The CIA’s take on the issue
A recently-released note of the CIA dating July 15, 1953, deals with “Chinese Communist Troops, West Tibet” and “Road Construction, Sinkiang to Tibet and Ladakh”. It says that late 1952 the 2 Cavalry Regiment, commanded by Han Tse-min, had its headquarters at Gartok (the main trade centre in Western Tibet). We are told the regiment has 800 camels and 150 men garrisoned at Rutok (written Rudog in the US document), in the vicinity of the Panggong lake, shared with Ladakh.
The same report affirms that another PLA’s regiment is stationed on the Tibetan side of the Tibet-Ladakh border, near Koyul in the Indus Valley in Ladakh.
According to the US document, the 2 Cavalry’s commandant announced the Chinese intention to built new roads in the area.
The latter road is clearly the Aksai Chin road (now Highway 219), though the alignment may have been slightly different from the present one and it was probably not usable by heavy vehicles (only 4 years later, heavy trucks will be able to ply on the road).
It is difficult to believe that the information available with the US Intelligence agency was not known to their Indian counterpart.
The Hindi-Chini bhai-bhai wave (or was it a tsunami?) was most likely too strong. Further, Nehru’s collaborators (Mullick in particular) probably did not know where India’s frontier lay. Were they interested to know?
The Chinese local commander, Han Tse-min asserted that “when these roads were completed, the Chinese Communists would close the Tibet Ladakh border to trade.” It is what they did a year later soon after the signature of the infamous Panchsheel Agreement.
Even better, the CIA document says that Han declared that “the Chinese Communists in Sinkiang [Xinjiang] were telling the people that Ladakh belongs to Sinkiang.”
Ten days later, another CIA note detailed the trade between Ladakh and Xinjiang, giving the coordinates for each place: “The Tibetan traders who visit Leh, are from the Chang Tang area, an arid plateau region in northern Tibet [plain between Xinjiang and Tibet], bounded on the north by the Kunlun Mountains and on the south by Trans-Himalayan Mountains. These traders follow the Chushul [in Ladakh] route from Tibet to Leh. Border check posts on this route are at Chushul and Koyul.”
The note continues: “The Tibetan traders carry tea, incense and veils for sale in Leh; on their return they carry dried fruit, soap, cigarettes and sugar. Traders from Leh carry wheat flour, barley and eggs to Tibet, and return with wool and silver coins.”
This shows how flourishing the trade was in 1953 …for a couple of years more. All this ended once the Aksai Chin became fully operational.
The July 24 note provides details of the traditional routes used by the caravaners; one runs from Khotan to Sugat Karaul and Shahidulla Mazar and then to Kargilik and Kashgar; another one goes through the Karakoram pass and the Depsang Plain.
The CIA remarks: “The only Chinese in northwestern Tibet are the Chinese Communist troops, seven or eight hundred of whom are stationed along the Tibet-Ladakh border. They first appeared in northwestern Tibet in 1951, having come from the Khotan.”
In the spring of 1953, no construction of airfields could be spotted near Rutok: “although the terrain in that area is suitable for such construction”, but there was already a military radio station, “as in every military district in Xinjiang.”
The note added that there is “general discontent among the Tibetans as a result of the Chinese Communist occupation. The Chinese were in complete control of trade and business.”
Delhi was not concerned. It would continue sleeping for several more years, with the result that the Indian territory is still occupied today.
The CIA papers tend to prove that the Government knew about the Aksai Chin road much earlier that thought.
Posted by Claude Arpi at 6:18 AM