Beijing has decided to invest US $ 24.8 billion (170 bn yuan) for constructing a network of highways in Xinjiang …for improving connectivity with Pakistan. This is the official justification.
China plans to also use this huge amount (some 50% the amount of the China Pakistan Economic Corridor) to build a “trade hub by linking countries along the Silk Road Economic Belt.”
Xinjiang will further invest some US $ 1.18 bn (8.1 bn yuan) in railways construction and US $ 0.7 bn (4.8 bn yuan) in civil aviation projects. It is said to be an increase of 50 per cent compared to 2015.
Zhang Chunlin, director of the Xinjiang Development and Reform Commission stated that the region “has never seen such a huge investment in road construction.”
This investment should surpass the total funding from 2011-2015 for transportation infrastructure in the restive Uyghur-dominated region.
Zhang added that building a highway network in a region, one-sixth of China's territory, is a priority: “Without the highways, oil, coal and agricultural products of Xinjiang cannot be shipped out of the region smoothly and logistics costs will remain high.”
Zhang remarked that Beijing “sees Xinjiang, which borders countries including Kazakhstan, Pakistan and Mongolia, as a key trade centre for the economic belt.”
In the mind of Beijing’s leadership, this massive investment is also linked to the presumed ‘separatist’ activities of Uyghur leaders such as Rebiya Kadeer, as well as the presence of the Indian front nearby.

Doubtful benefits
In the meantime, The Global Times, the mouthpiece of the Communist Party reported that for the first time, the Uyghurs will be able "to eat seafood imported from Pakistan by container cars through the Khunjerab Pass in January. This successful trial is expected to improve overland trade between China and Pakistan via the China-Pakistan Economic Corridor, which accounts for 2 percent of the overall trade between the two countries."
But are the Uyghurs eating fish?
Nobody has asked this question.
The Global Times explains that the first batch of Indian Ocean seafood shipped by container cars arrived in Xinjiang Uyghur Autonomous Region through the Khunjerab Pass on January 13, marking the first time that ­Taxkorgan Tajik Autonomous county, ­Kashgar prefecture, has received imported seafood.
The article adds: "The highway, also known as China-Pakistan Friendship Highway, which connects Xinjiang and northern Pakistan, stretches more than 1,000 kilometers across the Karakoram, Himalayas and Hindu Kush mountains."
It also admits that though the CPEC is supposed "to bring earth-shaking changes to Pakistan's economy," it has yet to do so "due to factors including lack of necessary infrastructure and low consumer demand in western China."
It gives an example: "an oil and gas pipeline in Pakistan linking the Middle East and China has not been connected, and thus the country can't get oil transit fees, ...though the Karakoram Highway is expected to boost overland trade between the two neighbors, objective factors make it hard to measure to what extent the corridor will contribute to its bilateral trade," it concludes.
It is rather a frank assessment.

Restiveness in Xinjiang
Recently, the spokesperson of the Minister of Foreign Affairs stated that China ‘resolutely’ opposes the visit of Rebiya Kadeer, the Uygur leader to Taiwan and her participation ‘in any activities on the island.’
An Fengshan, spokesperson for the Taiwan Affairs Office of the State Council, had mentioned earlier China’s opposition to the Taiwan Solidarity Union’s invitation Kadeer to Taiwan in March: “It is a well-known fact that Rebiya Kadeer is among the heads of the separatist 'East Turkistan' forces. …The invitation by the 'Taiwan independence' secessionist force is intended to make trouble and will certainly harm cross-Strait relations." 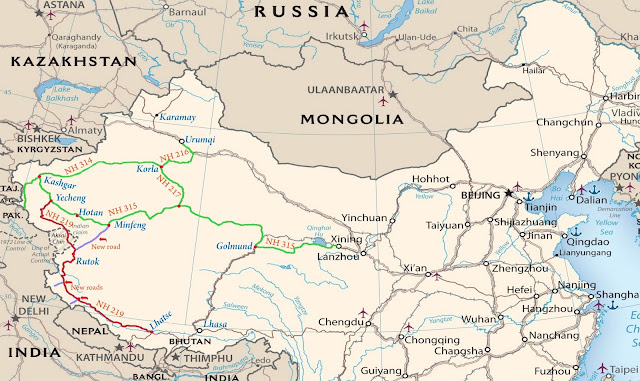 Restiveness of the local Muslim populations is certainly one of the reasons for the mega infrastructure, but it is also necessary for Xi’s Dream project, i.e. the new Silk Roads, particularly a better connectivity between the Mainland and Central Asia …and Pakistan.
Xinhua admits: “Currently, there is one highway linking Xinjiang and other parts of China to the east.”
Does the news agency mean the NH 219 linking Xinjiang to Tibet?

The Defence of India's border
In any case, the strengthening of the defence of the Middle Kingdom, particularly the Western Theater Command facing India, is a vital issue for Beijing.
As mentioned a few weeks ago on this blog, Beijing plans a second highway between Tibet and Xinjiang. It will link the NH 219 to the NH 315 running south of Xinjiang towards Qinghai (via the ‘nuclear’ sites in Lop Nor).
It will be a game changer, but the Indian media and the government seem to be sleeping.
Posted by Claude Arpi at 6:14 AM