Chinese Irredentism and the Great Rejuvenation 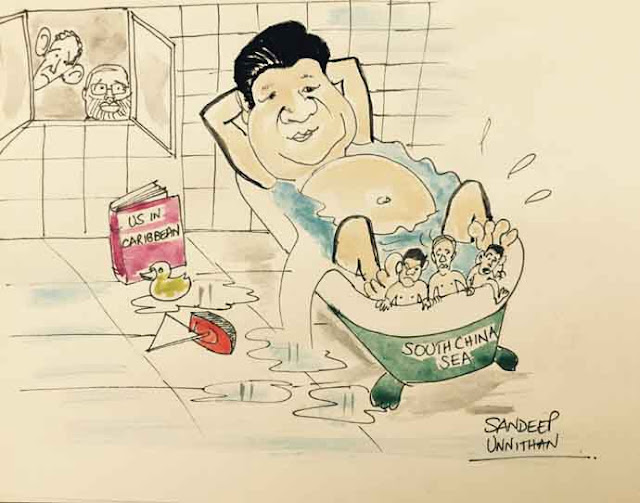 “The great rejuvenation of Chinese nation is an unstoppable historical trend that won't be diverted by the will of any individual country or person,”

An irredentist attitude
Remember the great historian Dr. RC Majumdar’s statement decades ago. He rightly assessed the Chinese way of behaving: “There is one aspect of Chinese culture that is little known outside the circle of professional historians. It is the aggressive imperialism that characterized the politics of China throughout the course of her history, at least during the part of which is well known to us. Thanks to the systematic recording of historical facts by Chinese themselves, an almost unique achievement in oriental countries... we [historians] are in position to follow the imperial and aggressive policy of China from the third century BC to the present day, a period of more than twenty-two hundred years... It is characteristic of China that if a region once acknowledged her nominal suzerainty even for a short period, she should regard it as a part of her empire forever and would automatically revive her claim over it even after a thousand years whenever there was a chance of enforcing it.”
Though written long ago, it is shows that Chinese mindset.

Angry reactions
As mentioned earlier, the Chinese reaction was violent.
According to The Quartz: “Patriotic netizens have called for war against the Philippines, a boycott of the country’s products, and created a somewhat racist cartoon to mock Filipinos. They’re jumping the Great Firewall to spit vitriolic, expletive-laden insults on Twitter, and over 20,000 Chinese citizens have signed an open letter to protest against the court ruling. Many can’t believe the Philippines brought a complaint to an international tribunal to begin with.”
Will this help? Certainly not.

Implementations?
Though it will be difficult to implement the judgment, it could however create jurisprudence. The Permanent Court of Arbitration (PCA) is not a UN court, but “organiser of arbitral tribunals to resolve conflicts between member states, international organizations, or private parties,” it remains a very respectable and respected institution.
The range of legal issues taken by the PCA can involve territorial and maritime boundaries, sovereignty, human rights, international investment, and international and regional trade.
The first effect of the ruling of the Court may to calm down the irredentist ardours of the Middle Kingdom, at least for some time.
It is a first international warning to China: if Beijing wants to become a ‘normal’ State, it has to follow the rules accepted by the rest of the world community.
Beijing has to decide in which category it wants to be listed: with the rogue States like North Korea or with ‘normal’ States?

Jurisprudence?
Take the example of Arunachal Pradesh.
For years, China has been trying to claim the entire Indian State as hers, with no historical justification, except for the fact that a small part of State (Tawang) has once upon a time paid monastic taxes to a monastery near Lhasa. Chinese claims are clearly not tenable in international law.
Arunachal may be the most glaring case, but the above is also true for many areas in Ladakh, in Uttarakhand or Himachal … and in POK as well.
Without any historical basis, Beijing has regularly claimed large chunks of its neighbours’s territory.
The ruling of the PCA should remind China that all the nations live on the same planet and commonly agreed rules should be followed by all.
Though in 1959, the International Commission of Jurists had condemned China’s Human Rights violation in Tibet, it is the first time that the issue of territoriality involving China has been looked into, analyzed and a judgment delivered. This creates a precedent which has other serious implications.
The Chinese President may say that “the Permanent Court of Arbitration’s verdict will not affect Beijing’s territorial sovereignty and maritime interests in the fiercely contested waters,” it will definitively create a jurisprudence with the possibility of more States approaching the PCA.
During a meeting with European Council President Donald Tusk and European Commission President Jean-Claude Juncker, President Xi Jinping stated that China will not accept any proposition or action based on an international tribunal’s ruling over the disputed SCS: “We firmly insist on maintaining peace and stability in the South China Sea, and on directly negotiating for a peaceful resolution on relevant disputes with states that are directly involved, based on the respect of history and in accordance with international laws,” Xi said.
Today, China only accepts the common rules favorable to China.
After the La Hague verdict, it may not be acceptable for the world community any more.

The China-Pakistan Economic Corridor
In April 2015, Xi arrived in Islamabad bringing with him generous gifts for Pakistan: an eye-popping $46 billion worth of planned energy and infrastructure investment to boost Pakistan's flagging economy. This included 10,400 megawatts to Pakistan's national grid through coal, nuclear and renewable energy projects. It sounded like a Chinese Dream for Islamabad!
Beijing wanted to help Pakistan to develop a China-Pakistan Economic Corridor (CPEC) which will eventually link up its pet project, the two New Silks Roads (also known as ‘One Belt, One Road’).
In other words, the Chinese-sponsored port of Gwadar on the Arabian Sea will be connected through the Karakoram Highway, to the Xinjiang province in China’s Far West and Central Asia …and later Middle East, Africa and Europe. The ‘corridor’ will have railways, roads, optical fiber cables, dams (to produce the necessary electricity), pipelines, you name it!
Observers marveled at Beijing kindness (and wealth), but don’t be fooled by the Chinese generosity: Beijing is investing for Beijing!
The important point for India is that several of the CPEC’s crosses over the Indian territory in Kashmir. It is not acceptable and ultimately India could, as a last resort, take one day the Philippines way.

A Belligerent Mood
The ‘expert’ quoted earlier, wrote in the China Military Online: “The new China didn't bow to power or hegemony at its weakest moment. Now the rising China is more resolved to defend its own interests. Certain countries should be fully aware that no matter how many tricks they play, whatever actions they take, they won't change the fact that South China Sea Islands and adjacent waters all belong to China, or stop China's steps to become stronger, let alone shake Chinese military's resolve and will to staunchly defend national sovereignty and security.”
With a wounded ego, the Middle Kingdom can become even more belligerent; in any case the reference to the PCA shows that if Beijing does not accept the verdict, it will be difficult to be considered as a ‘normal’ State by the world community.
Posted by Claude Arpi at 6:17 AM