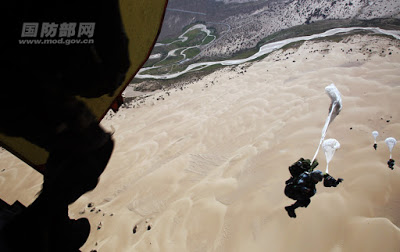 As the Dalai Lama, the apostle of peace, celebrates his 81st birthday in Karnataka, China is reinforcing its war preparation on the Tibetan plateau.
It does not mean that a conflict is imminent, but in case China has 'to face India', Beijing wants to be ready.
A year ago, I mentioned on this blog the dual-use of airports in China.
Xinhua had just announced the possible integration of civil-military airports to "strengthen aviation safety and combat support capabilities."
A joint statement from the People Liberation Army Air Force (PLAAF) and General Administration of Civil Aviation (CAAC) had announced that the integration will include joint maintenance of airport support facilities, joint flight safety support and joint airport management.
Interestingly the Lhasa Gongkar Airport in Tibet was one of two first pilot airports to implement the 'integration'.
The other one was the Sunan Shuofang International Airport in Wuxi in Jiangsu province.

A new law for dual use integration
On July 1, China Military Online reported that new steps have been taken to “help PLA Air Force (PLAAF) cope with emergencies.”
A joint meeting on the development of military-civilian integration of dual-use airports of the PLAAF was held in Beijing on June 17.
On the agenda was the "Interim Provisions of Operation Security at Dual-use Airports of the PLA Air Force."
The PLA website said that it is based on win-win principles for both the military and civilian sides.
The new arrangement to integrate the development of military-civilian airport resources between the PLAAF and civil aviation is now being implemented, says the website, which further explains: “Its main purpose was to establish a complementary management mechanism with smooth coordination and shared resources to gradually form a support capability that guarantees flight safety at peace times and meets combat needs at wartimes.”
Beijing believes that “two [first] airports [Lhasa and Sunan Shuofang] are good examples of dual-use airports.” 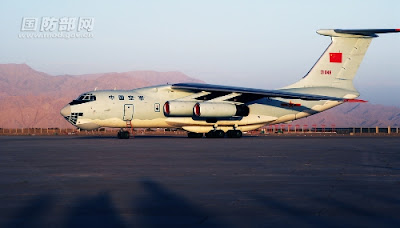 Why Lhasa Gonggar Airport?
Because it provides “important support for Tibet's economic development and national security in China’s Southwestern region.”
Lhasa Airport has always been the hub to ‘defend' China’s borders …against India.
The China Military Online site remarks: “On the one hand, as an important force in Tibet’s transportation, the airport has made great contributions to Tibet's economic construction. It has safely transported more than six million passengers in total since it was put into use. The cargo throughput also surpassed 140,000 tons.”
It adds: “On the other hand, the airport is an important channel to transport the PLA's new recruits and strategic materials to Tibet. The airport is also a major ‘airborne bridgehead’ in Southwest China.”
As mentioned last month, the 15th Airborne Corps exercised in Tibet recently. Photos appeared with the following caption: “a mechanized regiment of 15th Airborne Corps, conducted a battalion size rapid deployment into the Tibetan Plateau. Pictures from this ‘independent action’ exercise.”

To wait for the reinforcements
A specialized blog (China Defense Blog) commented:


Tibet is one of China's largest regions but with only three line brigades protecting it (52nd, 53rd and 54th mountain Brigades), clearly it's ORBAT [order of battle] is not geared for large scale military operations, especially in defense against a foreign power's [i.e. India] new mountain strike corps. To beef up, the PLA high command is shifting its 15th Airborne Corps for rapid reinforcement from Wuhan in time of crisis, hopeful this buy time until REGFORCE [regular forces] reinforcements arrive.

The article in the  PLA website mentioned above observes: “It has been found that the development of military-civilian integration of dual-use airports has very important practical significance and strategic benefits. First, the dual-use airports greatly save the cost of airport construction. Second, such airports bring great benefits to both the military and civilian sides.”
Does it means that the up-gradation of the Lhasa Airport goes on the civilian budget? Probably!
The China Military Online to conclude: “For the PLAAF, dual-use airports can significantly improve the support capability of military airports. Such dual use can provide more footholds for the Air Force to deal with emergencies and future operations. …Practice has proved that the construction of dual-use airport is a win-win move.”
All this is not really new, but it has now been formalized and the new arrangements come under a law.
In the future it will be officially extended to all infrastructure development, including roads, railway lines, etc..
When will the Tibetan plateau become a Zone of Ahimsa as the Dalai Lama once wished. Not soon!

Airbus A330 lands in Tibet
Incidentally, on July 1, the 1st Airbus A330 'wide-body' jet of Tibet Airlines 'smoothly' landed at Lhasa airport.
"It marked that Tibet airlines formally entering the era of 'wide-body jet', reported Xinhua which added: "The maximum take-off weight of the Airbus A330 wide-body jet is 242 tons, which is the first of its kind in China. What's more, it is also the first kind of wide-body jet that possesses advanced navigation ability in the world. The wide-body jet has many advantages on seats, cruding range, and plateau operation, which is conductive to the development of Tibet airlines and has landmark significant meanings."
It can certainly be dual-used in times of 'difficulties'.

Another piece of news: the China Eastern Airlines Flight A319 smoothly landed in the Qinghai Golok Airport at 2:20 p.m. on July 1. It marked the formal opening of the Golok Airport, according to chinanews.com.
The Golok Airport is located 5.5 kilometers southeast of Dawu Township, Maqen County of Golok Tibetan Autonomous Prefecture.
Some 170 million US dollars were invested into the 3,788-meter-high runway and airport facilities.
It is the 6th highest airport in China and the 8th highest in the world.
The airport was designed for a future capacity transporting about 80,000 passengers by 2020, carrying over 200 tons of cargo and accommodating 940 planes landing and taking off.
The construction project started from August 29, 2013.
The use of this airport will be two-fold: "push forward the economic development powerfully and speed up construction of the Sanjiangyuan National Park" and bring reinforcement of troops of the People's Armed Police Force in case of need.
Golok in the most restive county in Tibet.

Tail End
A Chinese website has announced that in order to provide better service, the Yatung's border station, near the Sikkim border "has set up a cultural exchange platform for its police officers, using cultural exchange lectures, classroom instruction, discussions, and other methods to enhance the operational capacity of the officers on duty, increase officers' foreign language level, and create a good living environment for the police officers."
PLA officers are learning Hindi! 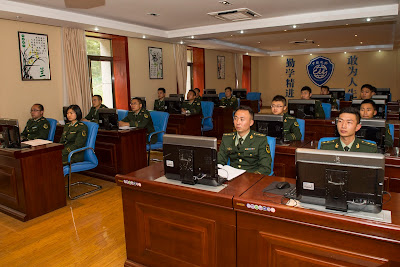 Some more photos of the 15 Airborne Corps 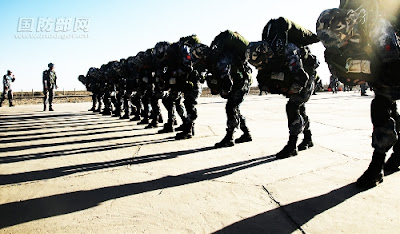 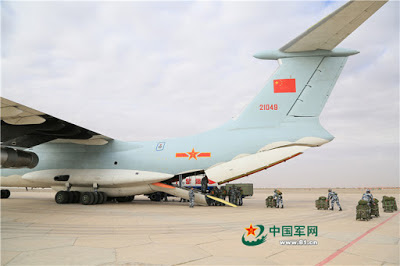 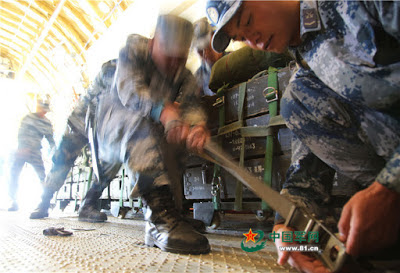 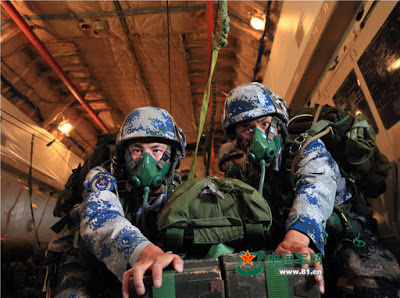 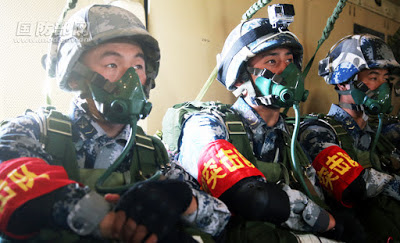 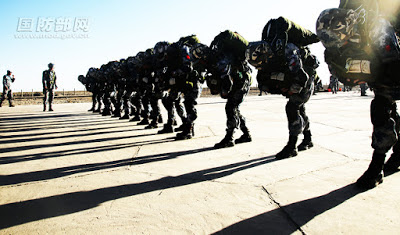 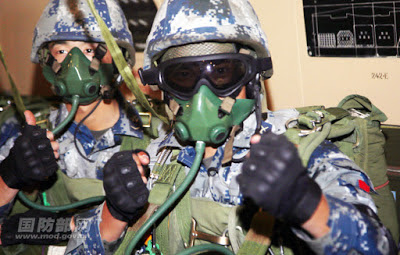 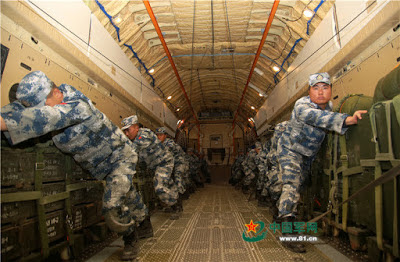