For the Sake of Happiness 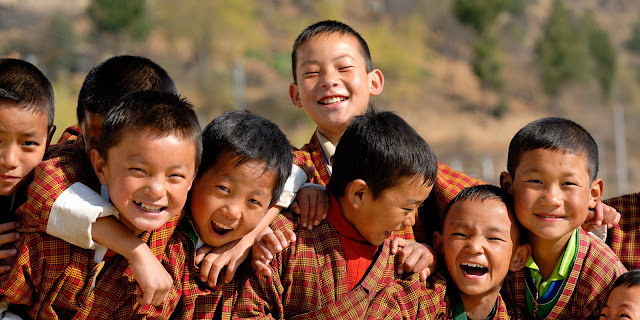 My article For the Sake of Happiness appeared in Hindi in 23 editions of the Dainik Baskar.
The translation is not mine!

Just Google 'Bhutan', hundreds of articles such as ‘discover a kingdom where happiness rules’ will appear on your screen.
The Kingdom of the Dragon is today considered as the happiest and most contented country of the planet.
But what is the happiness?
Wikipedia explains: “Happiness is a mental or emotional state of well-being defined by positive or pleasant emotions ranging from contentment to intense joy.”
Well, a definition can’t replace a smile on a child’s face; happiness is indeed beyond definition.
What is more interesting is that a tiny (in size) nation has made the concept of ‘global happiness’ known to the world.
The idea of a Gross National Happiness (GNH) was coined in 1972 by Bhutan's fourth King, Jigme Singye Wangchuck.
It is true that for centuries, Bhutan’s culture has been based on a deeper understanding of life, and not on purely material development whose only objective is a constant increase of the gross domestic product.
It was a stroke of genius, from a monarch who perhaps saw the Future.
It was not fashionable as yet, when Thimphu first pledged to have an economy preserving Bhutan’s culture of contentment (santosh).
Bhutan may not be a world decider like the US, China or India, but the Himalayan nation is now regularly cited during international conference.
Bhutan is also present in mundane news, for the right reasons: their Royal Highnesses the Duke and Duchess of Cambridge visited the Land of Happiness and trekked up to the picturesque Tiger's Lair, also known as Paro Taktsang in Dzongka, Bhutan’s national language. The monastery complex, hanging on a cliffside of the upper Paro valley, was built during the 17th century on the spot where the Swat-born Guru Padmasambhava meditated for three years, three months and three days. Paro Taktsang is one the thirteen ‘Taktsang’ caves which were blessed by the Master of Supreme Happiness.
Looking at the photos taken by the journalists who followed the couple half-way, the royals must have experienced some bliss during the unusual trek.

Does the world understand happiness?
A few weeks earlier, data collected by the United Nations from people in 156 countries, had surprisingly ranked Bhutan a lowly 84 in the list of Happy Nations. Different variables were used: real GDP per capita, social support, healthy life expectancy, freedom to make life choices, generosity, and perceptions of corruption.
The fact that Denmark, Switzerland, Iceland, Norway and Finland are the five toppers shows that these variables are based on Western values. It is a great pity! Can you believe that China is listed 83, just before Bhutan, while India is 118?
Each country is also compared against Dystopia, a hypothetical nation characterized by human misery, oppression, disease, overcrowding and pervasive fear, a place where everything is wrong. Dystopia is the opposite of Utopia, synonymous for an ideal society with no crime or poverty.
Despite the Western prejudice (or lack of understanding) in the data collection and analysis, it is interesting to see that the UN has begun studying the concept of ‘happiness’ which has been central to the Indian and Himalayan culture.

Happy Environment
A few weeks ago, Tshering Tobgay, the Bhutan Prime Minister gave a most inspirational TED talk at Vancouver, Canada.
Tobgay spoke with great eloquence of the special culture of the Land of the Dragon, its concept of Gross National Happiness, climate change, environment and free education for all. Tobgay said: “Of the 200-odd countries in the world today, it looks like we are the only one that's carbon neutral. Actually, that's not quite accurate. Bhutan is not carbon neutral. Bhutan is carbon negative.”
The ‘Happy’ Prime Minister asserted: “But it is our protected areas that are at the core of our carbon neutral strategy. Our protected areas are our carbon sink. They are our lungs. Today, more than half our country is protected, as national parks, nature reserves and wildlife sanctuaries.”
The latter are connected through a network of biological corridors: even animals should be happy in Bhutan.

The Pillars of Happiness
Bhutan defined the four pillars of ‘Happiness’ as sustainable development, preservation and promotion of cultural values, conservation of the natural environment, and establishment of good governance. GNH is officially part of Bhutan's five-year planning process, which guides the economic development of the nation.
Easier planned than done!
But as the world starts looking back at the mess it has created, many believe that “after all, this GNH was perhaps not so naïve.”
At the end of the Paris Conference, the European Union (EU) acknowledged Bhutan’s ‘extraordinary ambition’ in addressing climate change by signing a ‘declaration’, which recognizes “Bhutan’s unique situation as a land-locked and least developed country with a fragile mountainous environment.”
‘Happiness is no more a utopia; Bhutan is often now cited as an example to follow.
Being a Global Village, in today’s world, no nation remains secluded, able to play according to its own rules without reference to its neighbours.
One could ask: with Bhutan becoming wealthier, will Happiness be consigned to the backstage for the sake of greater ‘wealth’?
If one believes news reports, dam companies will soon rule the Land of the Dragon. With ‘development’ becoming the universal god, can society remains ‘happy’?
It is up to Bhutan, but the important point is that the concept of ‘Happiness’ is now acknowledged worldwide.
During his Ted Talk, Tshering Tobgay said that through the biological corridors: “our animals are free to roam throughout our country.”
It is a fact that the fauna is still happy in Bhutan.
The Land of the Dragon has the highest population of the White-bellied Heron (ardea insignis) in the world. It was acknowledged during an international workshop on White-bellied Heron conservation conducted by the Royal Society for Protection of Nature. Bhutan now has 47 percent of the WBH global population, up from only 14 earlier.
I sometime wonder how Padmasambhava would have fared under the UN criteria. He had no social security, no wifi, no means of transportation (except for levitation), no house (though taktsang have breathtaking views), but his cave is still charged with happiness.
Will it last, is another question.
Posted by Claude Arpi at 7:24 AM