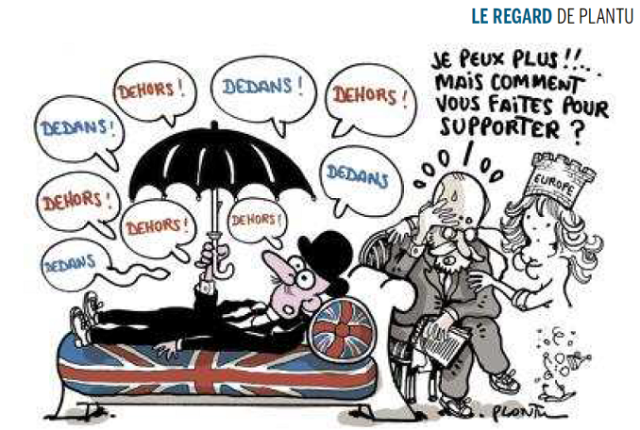 Very few events have triggered such a flood of comments as the vote for the Brexit in UK.
For some, it was suddenly as if the world had ended; though it may not be, it could be the last journey of an empire on which the sun used to never set.
Cartoonists have also tried to capture the folly of the Brexit. One of the most telling caricatures I came across was by Plantu in Le Monde.
One sees Sigmund Freud seating near a patient lying on the Union Jack on a sofa. Obviously the person being psychoanalyzed represents the British voter, who keeps repeating: “In, out, in, out, in, out, in…”. Near a frustrated, sweating, depressed Freud stands a young lady with a cap on which one reads ‘Europa’. The great psy says: “I can’t take it anymore. How have you managed to bear with this?”
It symbolizes the decade-old love-hate of the British for the European Union.

Immediately after WWII, Jean Monnet, the father of Europe and his German colleagues believed that the surest way to avoid a new conflict was to ‘share’ the very same materials which had in the past divided the two nations. Monnet took the initiative: “Coal and steel were at once the key to economic power and the raw materials for forging weapons of war… To pool them across frontiers would reduce their malign prestige and turn them instead into a guarantee of peace.”
As both Germany and France had to rebuild their industries, a supranational High Authority would be created to manage the resources in coal and steel for both nations. Monnet convinced Robert Schumann, the French Foreign Minister and the German Chancellor, Konrad Adenauer and hence the embryo of Europe was born. A treaty was signed in Paris in 1951 establishing the European Coal and Steel Community.
A close partnership between the enemies of yesterday was set in motion, though (or because) no ‘ideology’ was involved.
Six years later, six European states (France, West Germany, Italy, Belgium, The Netherlands and Luxembourg) decided to focus their energies on integration and union. Europe was born on March 25, 1957, with the Treaty of Rome. The main object of the Treaty signed in the Italian capital, was to set up a customs union and a common market between the member states.
When the British put their candidature in 1961, many started questioning their entry into the Common Market. Charles de Gaulle was one of them.
Two years later, during a press conference, after mentioning that London had refused to participate in the first experience, the general explained that the character of the British nation was “insular, turned towards the sea” and the nation had always been linked “through exchanges, markets, supplies to far-away countries”, not with Europe. He added that the “nature, structure, situation of England are deeply different from the ones of the continental people”. De Gaulle had a point.
Eventually, Great Britain was admitted in the Union in 1973, but doubts persisted in London, as the cartoon shows.
Coinciding with the Brexit, a second major event made the headlines during the last couple of weeks: the Euro2016 Football Cup.
While politicians and ‘experts’ discussed the implications of UK leaving the EU, lakhs of enthusiasts supporting one of the 24 ‘national’ teams poured into the main cities of France.
One could suddenly see the true diversity of Europe. From the organized Russian ‘breakers’ who destroyed the centre of Marseille on the first day, to the British hooligans, the Albanians, the Polish, the Scots or the sweet ‘green army’ of Ireland, who got the Golden Medal from the City of Paris for their exemplary behavior; all were Europeans.
Euro2016 was indeed a showcase of Europe in its diversity.
But to build a political Union on this diversity is not an easy proposal. Today’s Europe is not perfect, far from it. The babudom of Brussels has taken colossal size and power, but globalization cannot be wished away, hence the need for unity.
Take the case of Iceland, a small island with a population of just 319,756 people. The ‘Vikings’ managed to send England packing in the Euro pre-quarter final.
Iceland has suffered more than anybody else when the global financial crisis hit the island nation in 2008. Its currency crashed, unemployment soared and the stock market was wiped out. Unlike other European economies, the Reykjavik government let its three major banks fail and went after the bankers; even Prime Minister Geir Haarde was put on trial.
Today, Iceland is slowly recovering, but does not want to join the EU anymore. Icelandic President Ólafur Ragnar Grímsson stated that the Brixit is good news for Icelanders as it may give them an opportunity to work together with other countries in the North-Atlantic. “Iceland and Norway will now, in a totally new way, become participants in negotiations that must take place between the EU and the UK and the EU and member states of the European Economic Area (EEA) with this new triangle of countries in the North Atlantic.”
It may work, who knows?
Jean Monnet wrote once: “Have I said clearly enough that the Community we have created is not an end in itself? It is a process of change, continuing that same process which in an earlier period of history produced our national forms of life.”
The events of the last weeks demonstrate the difficulty to ‘unite’ while keeping the identity of each participant alive, but Europe is a ‘process’, not the end; it is where the British got it wrong.
Posted by Claude Arpi at 6:04 AM