Who is complicating what? 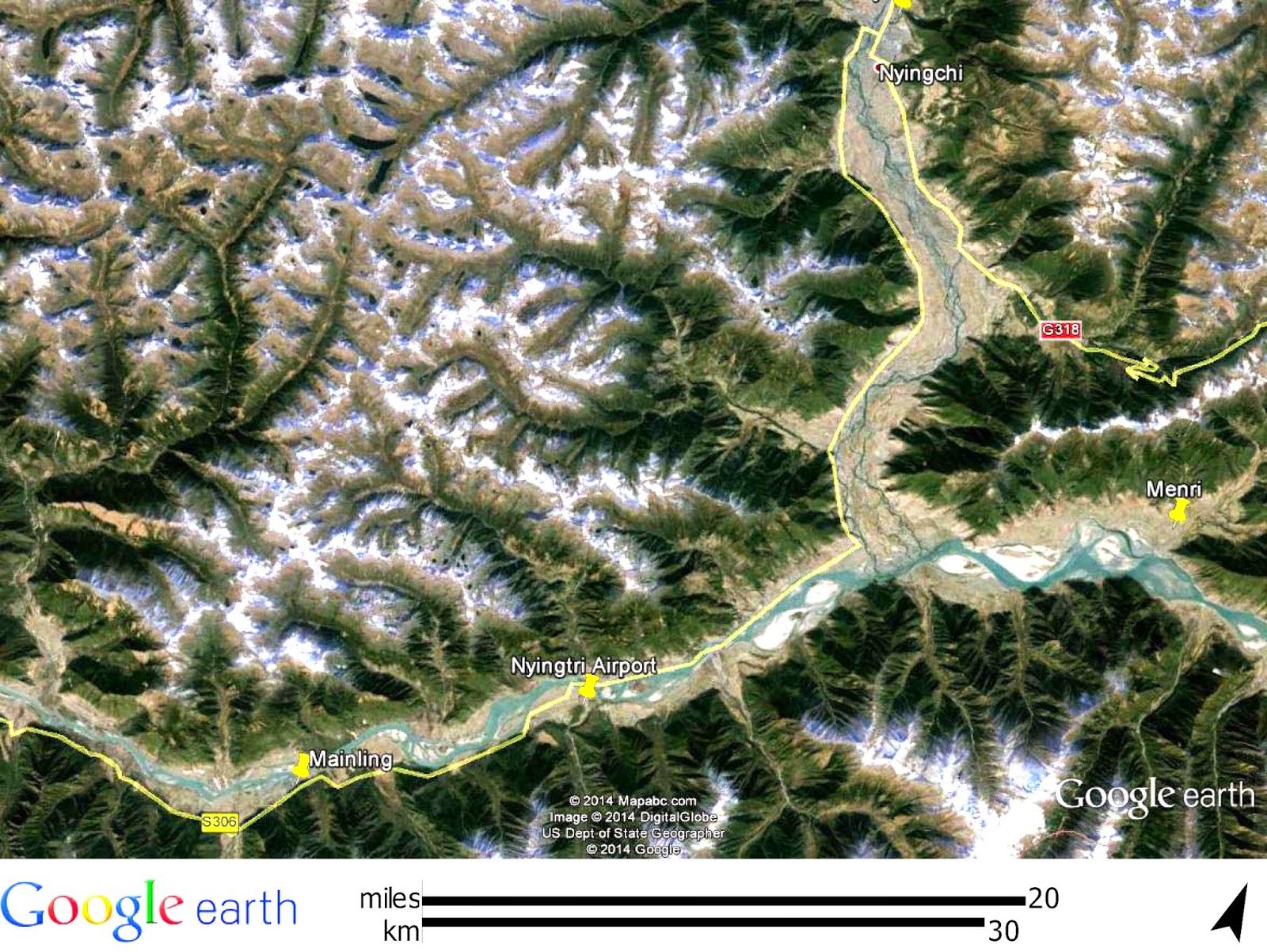 Amazing Chinese!
They are unhappy about India’s plans to build a road on the southern side of the McMahon Line in Arunachal Pradesh.
Chinese foreign ministry spokesman Hong Lei stated that India should not “take any actions that may further complicate the situation.”
"The boundary issue between China and India is left by the colonial past. We need to deal with this issue properly. Before a final settlement is reached, we hope that India will not take any actions that may further complicate the situation”, Hong said.
He added: “We should jointly safeguard peace and tranquility of the border area and create favourable conditions for the final settlement of the border issue.”
The proposed billion-dollar project on the Indian side of the India-Tibet border was announced by Kiren Rijiju, the Minister of State for Home Affairs during a visit to his home State.
Rijiju hoped that the construction of the 1,800km long road could begin soon. The Minister also said that the road would be the “biggest single infrastructure project in the history of India.”
One could ask Mr. Hong: when China decided to build a road through the Aksai China plateau in the early 1950s, was not Beijing ‘complicating’ the issue with India.
Yesterday on this blog, I mentioned two roads (today highways) which in the 1950s changed the military and strategic stakes on the plateau (the Qinghai-Tibet and the Sichuan Tibet highways).
At a time when China criticizes New Delhi for planning a road on India’s own territory, The China Daily assets that “The nation [China] has the capability to build an expressway linking up Tibet Autonomous Region and Qinghai Province in west China if major technical barriers are overcome.”
The newspaper quotes Wang Shuangjie, Party's chief of the CCCC First Highway Consultants Co., Ltd., a technical consultant for the planned project, who affirms: “Technically, we have the confidence to build the Qinghai-Tibet Expressway."
Wang and his team believe that the main technical barrier lies in the 500-km frozen earth belt along the planned 1,900-km expressway that links Lhasa with Qinghai’s provincial capital Xining. The Chinese engineers are aware of the extreme conditions on the Plateau, i.e. high altitude, low oxygen content, strong solar radiation and freezing temperature, which are serious technical challenges for the expressway's construction.
Wang said that the expressway will span over areas where the average altitude is above 4,500 meters and annual average temperature below zero.
The China Daily believes that Wang and his team need also to address problems concerning the possible environmental consequences of the construction (melting of permafrost?) and come up with proper technology to take care of the fragile ecological environment.
China has already completed the construction of the roadbed of the expressway's 300-km section between Xining and Caka in Qinghai, while construction of the 400-km section linking Xining with Golmud is also under way. The Chinese newspaper adding: “The rest of the 1,100-km section remains a hard nut to crack for engineers.”
China already ‘complicated’ the situation for India by bringing the train to Lhasa in July 2006 (and now to Shigatse); the express-highway from Xining to Lhasa will further tilt the strategic balance.
But that it not all, to complicate the situation further, Beijing plans to invest 278 million yuan (US $ 45 million) for expanding the Mainling (Nyingtri) airport. The Central Government has already allocated 139.5 million yuan (US $ 23 million) and the balance will be provided by the civil aviation development fund.
China Tibet Online says: “The abundant tourism resources and many famous scenic spots in the region attract more and more tourists to Nyingtri [Chinese Nyingchi] as their first stop for Tibet. In the first half year of 2014, Nyingchi totally received 836,200 tourists from home and aboard.
This airport is located north of the McMahon Line. 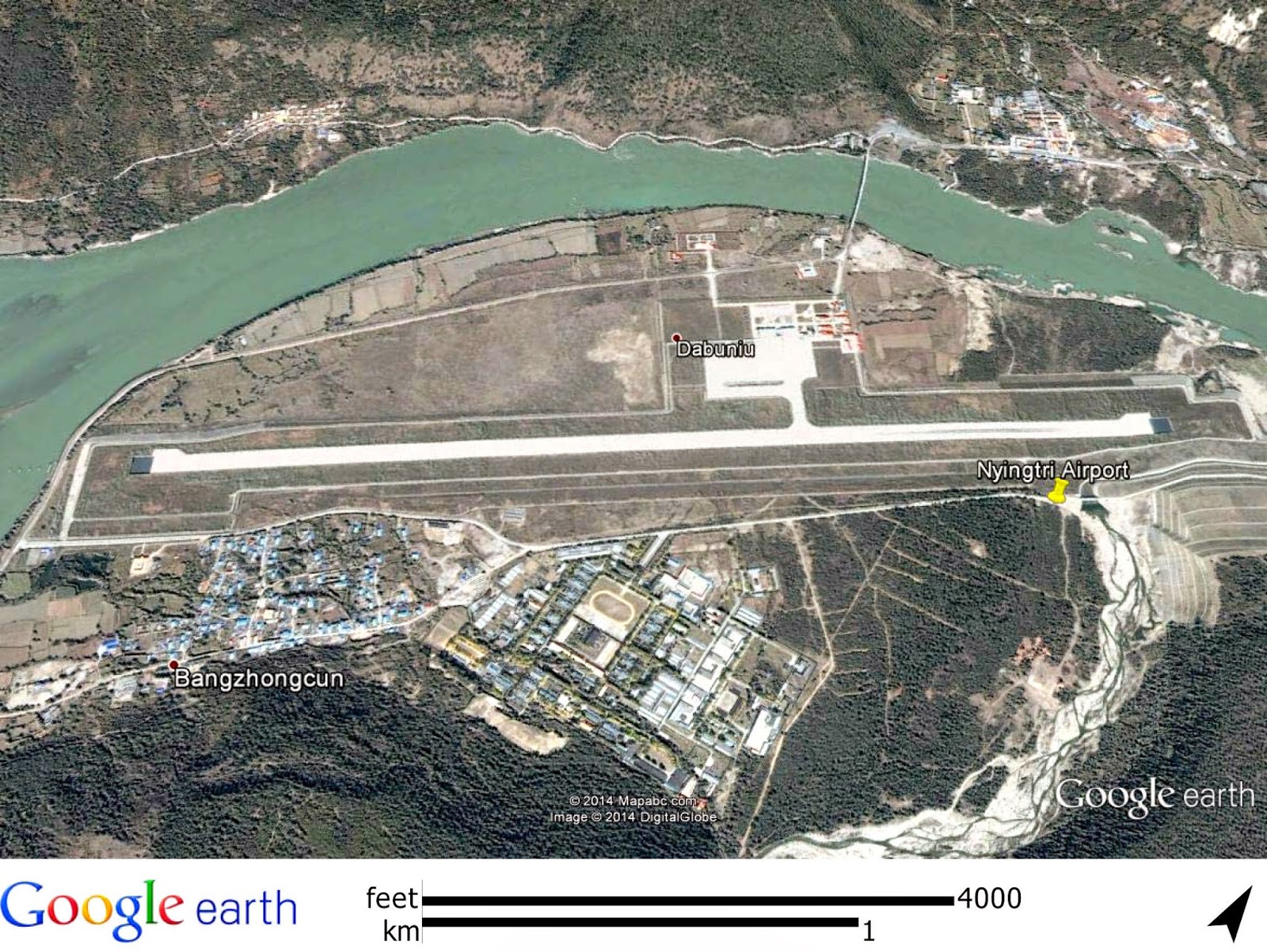 The Nyingtri Development and Reform Commission announced that, from January to September 2014, the Nyingtri/Mainling airport transported 246,611 passengers, up 17.5% from the same period in 2013.
Meanwhile, the airport handled a total of 2,734 takeoff and landing flights and 961.8 tons of cargo, up 17.7% and 74.6% from 2013 respectively.
Nyingtri/Mainling is the second largest (and lowest airport with an altitude of 2,900 meters) in Tibet.
It is built on the banks of the Yarlung Tsangpo (Brahmaputra), north of the McMahon Line.
For India, it is extremely worrying and it definitively complicates the situation on the north-eastern frontiers.
The train to Nyingtri in 2020 will further exacerbate the border row.
And then, the train to Chumbi Valley!
And of course, the train to Kyirong (see yesterday's post)
Mr. Hong Lei should check his facts before making statements.
Posted by Claude Arpi at 7:22 AM