Who wants to unify under the central leadership? 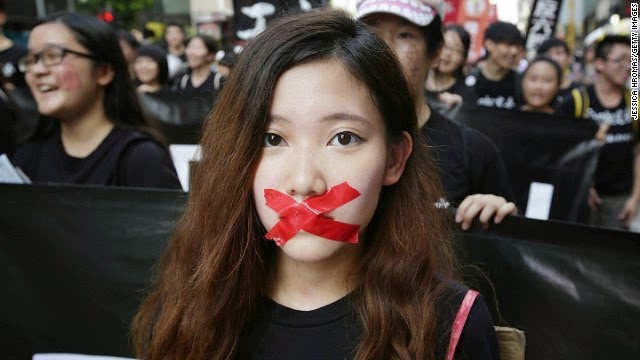 Yesterday, The South China Morning Post reported that a directive had been issued by the Party “for higher education entities to unify under the central leadership”.
The Hong Kong daily affirms that the Communist Party is tightening “its grip on Chinese universities by reaffirming the party secretary’s leading role in them.”
The ‘directive’ was released by the General Office of the Communist Party of China.
It says that after the fourth Plenum of the 18th CPC Central Committee (to be held next week) “all departments at universities across the country shall conscientiously make implementations that adhere to the party’s leading core position”.
You can understand why the students in Hong Kong are increasingly nervous about the 'One Country' scheme, in which the 'Two Systems' will go to the trap.
In the meantime, Zhang Xiaoming, director of Beijing’s Liaison Office in Hong Kong stated that the ‘Occupy Central’ movement is “a serious social and political event in that it violates the ‘one country’ principle, challenges the central authority, ignores the Basic Law, and is an illegal activity in flagrant violation of the existing laws of Hong Kong.”
He does not even speak anymore of 'Two Systems'.
Very surprising is the silence of the Tibetan Administration in Dharamsala, which has kept completely quiet.
Perhaps they have also become believers of ‘One Country’!
It would be sad!
Zhang Xiaoming, as usual, described the ‘Occupy Central’ movement as an attempt by the West to trigger a new ‘color revolution’ and “to pressure the Central Government and the HKSAR Government, and to require the NPC Standing Committee to rescind the decision that has been in force and the Chief Executive and SAR government officials to step down.”
But it is simpler than that: the Hong Kong students are just fighting for their freedom of speech, of thought, for their future.
Last month, in an editorial in the Party Journal, Qiushi (‘Seeking Truth’), it was announced that Peking University had directed its students and professors to “fight against speech and actions that criticise the Communist Party”.
It is what might happen to the students in Hong Kong in a few years from now, as ‘One Country’ will always prevail on ‘One System’.
The directive mentioned above directed Chinese universities “to establish a unified leadership under the party committee, cooperate and coordinate with the party and seriously carry out the essence of democratic centralism within the party.”
It is what the Hong Kong students do not want to happen in 5 or 10 years time.
Posted by Claude Arpi at 7:17 AM