Buddha is money in the Middle Kingdom

Buddha is getting bigger and bigger.
Why?
Because Buddha is money.
The South China Morning Post reported yesterday: "Giant statues of sage spring up all over mainland as developers and officials bid to lure tourists".
Tourism has become one of the most lucrative businesses in the Middle Kingdom.
The Hong Kong daily suggests: "Local officials on the mainland are drawing inspiration from Buddha, but perhaps not in a way he might have intended," adding "Tourism bureaus and developers are racing to build ever-higher statues of Buddha, in an attempt to copy the success of the Lingshan Grand Buddha in Wuxi, Jiangsu province."
The Lingshan Buddha is 88-metre-high statue/attraction; it got some 3.8 million visitors last year, generating more than 200 million US dollars for an investment of 725 tonnes of bronze. That's good business.
Hong Kong seems frustrated: five others Buddhas are taller than its Tian Tan Buddha (34 metres only). The tallest is of course the 208-metre-high Spring Temple Buddha in Lushan county in Henan province, while the Lingshan Grand Buddha, a 99-metre bodhisattva Ksitigarbha in Anhui province and a 48-metre statue of Amitabha Buddha at Lu Mountain in Jiangxi province, are also taller than the Hong Kong one.
Buddha is indeed money: the Lingshan park charges 210 yuan (US $ 3.5) per ticket; it gets hugely crowded during holiday times.
Kent Cai, a visitor from Ningbo in Jiangsu told The South China Morning Post (SCMP): "I felt dazed when I saw so many incense packages on sale - 50 yuan to pray for health, 128 yuan to pray for a child, 398 yuan to pray for vast happiness and 598 yuan for huge fortune."
What would Buddha say about this?
He would probably keep silent or meditate on human cupidity.
Xue Yu, a staff of the department of cultural and religious studies at the Chinese University of Hong Kong told the SCMP that local governments view giant Buddhas as an ambitious way to boost tourism: "The projects use the popularity of Buddhism and are a politically safe way to help build social harmony." 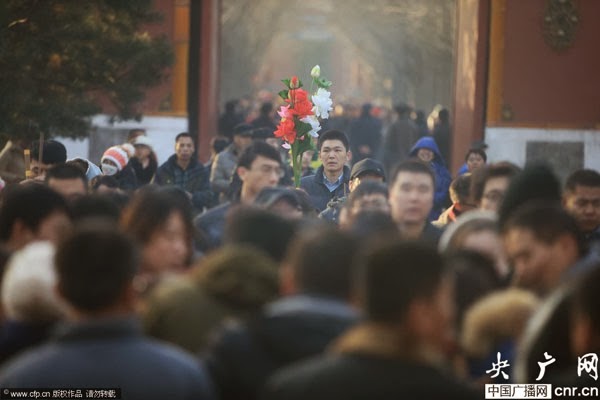 Whether it is 'politically' safe  is debatable, but it explains the growing popularity of Tibet amongst the Chinese masses (see yesterday's post).
Tibet too is money.
Chinese people not only love statues of Buddha, but they are also fond of  burning incense.
China News reported that on the eve of the Chinese New Year, tens of thousands of people lined up outside Buddhist temples overnight to have the opportunity to burn the first incense of the Year; the down-to-earth temples managers did not miss the opportunity to raise their prices.
One temple in Zhejiang Province is said to have priced the first incense at US $ 20,000. The China News article admits that people have ‘misconceptions’ and are misled by the belief that the first incense will make their New Year wishes come true.
But there is another side to the newly-found popularity of the Buddha, remember my earlier post on the Serthar Institute.
Buddha can be very subversive too.
Posted by Claude Arpi at 7:28 AM