The Middle Kingdom fishes in the Pacific 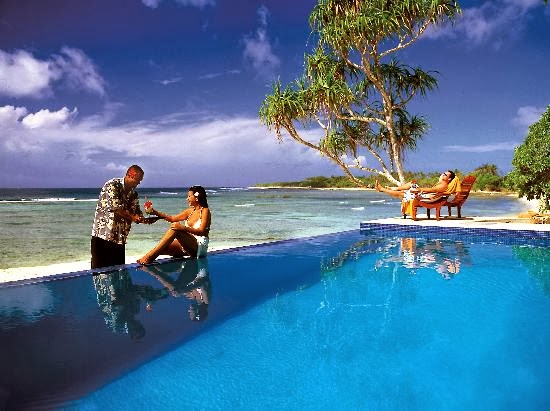 The Republic of Vanuatu is an island located in the South Pacific Ocean. The archipelago, of volcanic origin, lies 1,750 kilometres east of Australia, 500 kilometres northeast of New Caledonia and southeast of the Solomon Islands.
According to Wikipedia: “Vanuatu was first inhabited by Melanesian people. The first Europeans to visit the islands were a Spanish expedition led by Portuguese navigator Fernandes de Queirós, who arrived in Espiritu Santo in 1605; he claimed the archipelago for Spain and named it Espiritu Santo (Spanish for Holy Spirit). In the 1880s France and the United Kingdom claimed parts of the country, and in 1906 they agreed on a framework for jointly managing the archipelago as the New Hebrides through a British–French Condominium. An independence movement arose in the 1970s, and the Republic of Vanuatu was founded in 1980.”
The nation's name come from ‘vanua’ (for ‘land’ or ‘home’) and ‘tu’ (for ‘stand’). The two words 'Vanua-tu' refer to the independent status of the island-nation.

Vanuatu is getting good friends in the region.
According to China Military Online, Beijig has decided to its strengthen military ties with the island, which has a population of 220,000 people.
The PLA website reported that on January 17, Prime Minister Moana Carcasses met Wang Guanzhong, the PLA's deputy chief of general staff, who was on a tour of the island. It was not a touristic or fishing tour.
meeting with the Prime Minister took place in Port Villa, Vanuatu's capital.
Prime Minister Carcasses seriously affirmed that "the development of China has set up a very good example for Vanuatu."
Does it mean that Vanatu wants to become a Pacific Tiger?
To please his visitor, Carcasses reiterated that Vanuatu will continue to adhere to the one-China policy.
Wang Guanzhong declared that Beijing was 'very satisfied with the development of the China-Vanuatu relationship and is full of confidence in the development of the friendly cooperation between China and Vanuatu."
More to the point, he emphasized that "though the military relationship between China and Vanuatu has a late start, it progresses very successfully."
It is a case of what President Xi Jinping would term a 'fly and a tiger'.
General Wang announced that China was "willing to make joint efforts with the Vanuatu side to further enhance exchange and cooperation between the two countries in military fields and make active contributions to the development of the overall relationship between the two countries."
Wang Guanzhong also met with Joan Taleo, acting police commissioner of the island and Jobu Aishao, commander of Vanuatu Mobile Force (VMF). They had 'in-depth discussion' about the cooperation between the Chinese military and the tiny island.
China is obviously keen to extend its tentacles in the Pacific.
Posted by Claude Arpi at 7:41 AM