The Metok Road is Closed 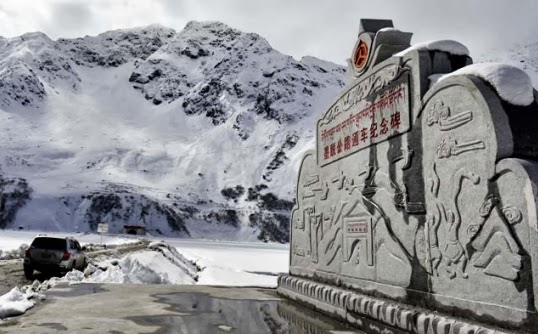 China likes to speak of the 'mysterious Metok of Tibet'.
Last November, the website China Tibet Online wrote the "Story of the Mysterious Medog (Chinese writes Medog for Metok)", explaining that the place is located in the southeast of China's Tibet Autonomous Region and the lower reach of Yarlung Tsangpo (Brahmaputra) River.
The Chinese site quoted a local Monpa girl saying, "the Medog County will be no longer mysterious after it opens to traffic."
Chinese news agencies asserted: "There is no other place in Tibet that gets so many titles as Metok, such as the 'secret lotus', 'lonely island on the plateau', 'world's wildlife museum' and 'rare animal gene pool'.
Soon after the road opened, it was announced that this strategic road located near the Indian border was expected to receive some 40,000 tourists.
As mentioned in my earlier postings, the opening of the Metok Highway to the civilian and military traffic was the most strategic development of the year 2013 as the county is located just north of the McMahon Line.
On December 18, China Tibet Online, in a photo feature on the famous road in winter, commented that the road between Metok and Bomi county had been formally opened to traffic on October 31, 2013, "ending the county's isolation from the outside world. The 117-km highway, which cost 155 million U.S. dollars, links Zhamog Township, the county seat of Bomi, and Metok in Nyingchi Prefecture in southeastern Tibet. With the opening of the road, people in Metok have higher expectations for their future."
Now it appears that the Metok road has been mysteriously closed.
Why?
According to Xinhua: "Tourists are not suggested to visit the Metok County in the coming few months as the Metok Highway is now in high avalanche incidents period."
It is strange since a few months ago, the road was said to be an 'all-weather' road.
Xinhua gives some explanation: "On January 17, the continuous strong snow has triggered a snow slide disrupting traffic along the newly-built Metok Highway, the only passage linking the county with the outside world." According to the Transportation Department of Nyingchi Prefecture, "maintenance staff was dispatched immediately to clear the road, resuming the traffic on the next day."
Apparently, there was no casualties.
But why to close the strategic roads for 2 or 3 months?
Again quoting the Transportation Department of Nyingchi Prefecture, Xinhua adds: "it was still not advisable to make a trip to Metok in the coming few months as the avalanche is frequent between February and March while the melting snow is easy to induce mud slide or landslide in April."
Too bad for the tourists, though as Xinhua put it: "Metok provides tourists a dramatic visual change from snow-capped mountain ranges to tropical and subtropical scenery, which is distinct from other prefectures in Tibet".
For India, the question is: will the road remain closed to military traffic?
It is doubtful. An all-weather road is usually opened the year long.
Posted by Claude Arpi at 6:52 AM