Why China needs to divert the Brahmaputra 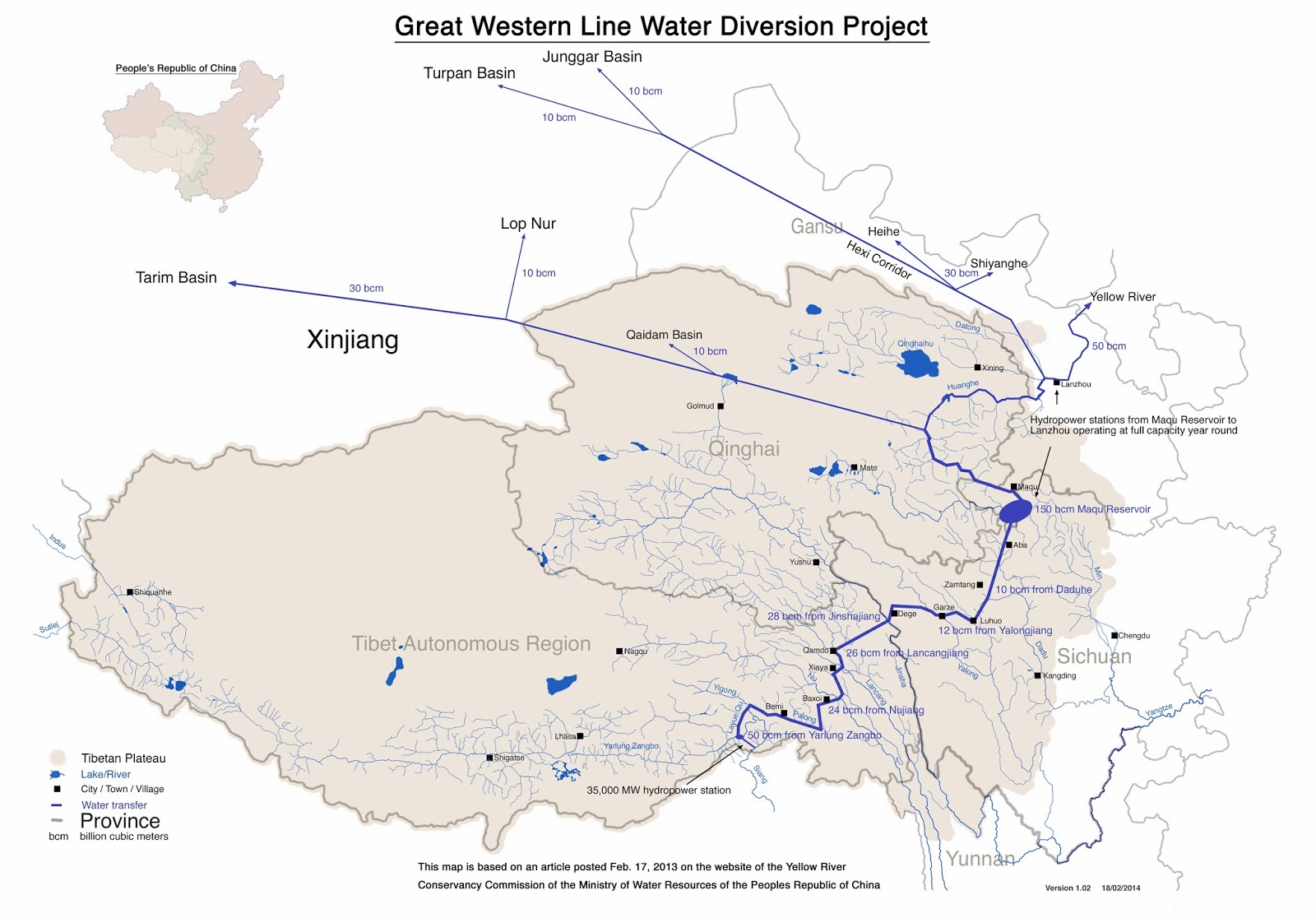 Several times during the last couple of weeks, I have  mentioned the Chinese new plans for the diversion of the Yarlung Tsangpo (Siang/Brahmaputra) and other Tibetan rivers towards the Yellow river.
My information came from a longish article posted on the website of the Yellow River Conservancy Commission of the Ministry of Water Resources of China.
The article is entitled,
Research on the Feasibility of Greatly Opening Up the Yellow River for Shipping (click on the link to read the original Chinese study).
Thanks to a friend, here is the translation of the two first sections which explain the rationale of the projected mega mega project. The map is strictly based on the description given in the article.
It goes without saying that there are probably different views in China, but there is definitively a strong lobby who wants to use the Yellow River as a navigation corridor and therefore needs the Siang/Brahmaputra's waters.

Navigation of the Yellow River and the Necessity of its Development
For a long time, people have been much more concerned with the exploitation of water resources than with the development of marine shipping. The NW of our country is dry, with little rainfall, and has a great need for water. There are vast areas of wilderness waiting for development, which really means they are waiting for large quantities of water to be brought in, because once they have water, the desert can become green, and only on that foundation can development begin. So people are very interested in projects to bring water from the South to the North. With regard to the extremely difficult "western line" project, many tempting plans have been proposed for large-scale water relocation. People have grasped the importance of water resources, but there is another important point still missing -- marine transportation and shipping. The Chang Jiang (Yangtze) has the best conditions for marine shipping of any river in the world, and can carry a greater volume of goods than any other river, but its utilization is not up to the standard of the Mississippi and Rhine, the other 2 great shipping waterways of the world. The Three Gorges project should have provided the best opportunity for full and efficient use of the Chang Jiang's shipping potential, but at that time, development proceeded under the principle of "power generation first, marine shipping second", and so the project never lived up to its potential to promote marine shipping. There is a limit to electric generation, but the river's capacity to carry goods can keep growing and growing as the riverbed is excavated deeper, so the potential economic benefits are very great. Even under the limits imposed by the current condition of the Chang Jiang, the Chang Jiang river basin area accounts for a solid 45% of China's GDP, and stands firmly as the main economic development axis of the entire country. If it can be said that survival and ecology are tightly linked to water resource management, then development and becoming strong and prosperous are even more tightly linked to marine shipping.
The key characteristics of marine shipping are high capacity and low cost, and it is suitable for the transportation of energy sources, minerals, heavy chemical products, heavy equipment, grain, livestock, and other large goods. This is most clearly seen with ocean shipping. Since China opened up for economic development, the fast development of the Southeast coast clearly proves the advantage conferred by marine shipping. The Yellow River basin, and the Northwest provinces, which are closely linked to it, have rich energy and mineral resources, and enormous potential for production of agricultural and husbandry products. It can be called an ideal area for large-scale marine shipping of heavy goods, and has potential far exceeding the Chang Jiang. Developing Yellow River shipping, especially opening it up to the ocean for navigation of ships exceeding 10,000 tons, is a fabulous prospect which the Yellow River basin could only dream of for centuries past. Therefore, opening up navigation of the Yellow River, and especially enabling ocean navigation for super-heavy class vessels, is of great necessity, and the day when it comes true is the day when the Yellow River basin and the Northwest will spread their wings and fly.
Continued improvements in quantity eventually result in a revolution in quality. As quantity increases, quality also improves, and qualitative improvements open the way for even greater improvements in quantity. The huge scale and vast area of the Yellow River corridor are an opportunity for a qualitative leap, and the economic and societal benefits which navigation of that corridor could bring, and what it would mean, are of incomparable value, almost beyond words. Therefore, for continued high growth rates in China's economy, expanding domestic demand, faster societal transformation, and sustainable development, opening up the Yellow River waterway could provide an enormous driving force forward, and is of the utmost strategic meaning.

The Necessity of Construction of the "West Line" Water Diversion Project
As humans make ever greater use of water resources, and as the world's climate grows ever warmer, the importance of strategic planning in water resource management is ever more prominent. In the next 30-50 years, as renewable energy sources come into widescale use, the importance of energy to societal and economic development will gradually give way to the greater importance of water resources for societal and economic development and human survival.
China has total water reserves of 2.8 trillion cubic meters, which is 4th in the world. But per capita water reserves are only 2300 cubic meters, which is 1/4 of the world average, and comes in 121th place. China is therefore among the 13 most water-poor countries in the world. Of China's more than 600 cities, more than 400 are in short supply of water, and more than 200 have severe water shortages. More than that, China's North-South distribution of water is severely skewed. 44.3% of the population live in the North, and 59.6% of arable land is in the North, but the North has only 14.5% of China's water resources, with average per capita water reserves of 747 cubic meters, 1/3 of the national average. Among the North's water supplies, the Yellow River, Huai River, and Hai Luan River are most prominent. The river basins of those 3 account for about 30% of both national agricultural output and GDP, but they possess only 7.2% of the country's water. As water supplies become tighter each day, water quality degrades, plant ecology deteriorates, and the land is subject to desertification. This has developed into the harsh reality we now see of dust storms. Ongoing water shortages in the North, have already become a great obstacle restricting economic and societal development, and severely threaten sustainable economic growth for the people.
The great "western line" water diversion project is the groundwork for the Yellow River shipping waterway project, and without it, there is no room to even talk about opening up the Yellow River for marine shipping. Because, the Yellow River has only 50 billion cubic meters of flow per year, not enough for drinking and industry. During dry periods, the probability is great that the Yellow River could even run dry, and not have enough water flow to float ships. The Yellow River shipping waterway project can provide full utilization of the "western line" water diversion project; with it, much more efficient use can be made of the water diverted into the Yellow River basin. Without it, it will be very hard to "digest" the high capital expenses incurred by the "western line" project and its long period for break-even on investment. The "western line" project can provide the foundation, and the Yellow River shipping waterway project can make it worthwhile. The 2 projects are tied together as one; without the other, neither of them could achieve its potential.
Aside from providing the water needed for marine navigation, it can also provide much-needed water resources. To the dry Northwest, that is highly desirable and seemingly unattainable. Only with large quantities of water, the Northwest can improve its soil, check the expansion of deserts, and finally rein in the raging dust storms. The trend of "local improvements in human habitat, but ongoing degradation as a whole" can be turned back, the poverty and backwardness of the West can be changed, the ever-growing gap between rich and poor can be shrunk, the ongoing sluggishness of domestic consumer demand can be improved, and economic development can be expedited. Therefore, the "western line" project, with its long distances and great scale, crossing between river basins, surely must be carried out.
Posted by Claude Arpi at 5:51 AM

Claude, an excellent eye opener. Brahma Chellaney has been crying screeming over this water diversion scheme of China which will virtually suck India dry but our we listening.