Will history repeats itself? 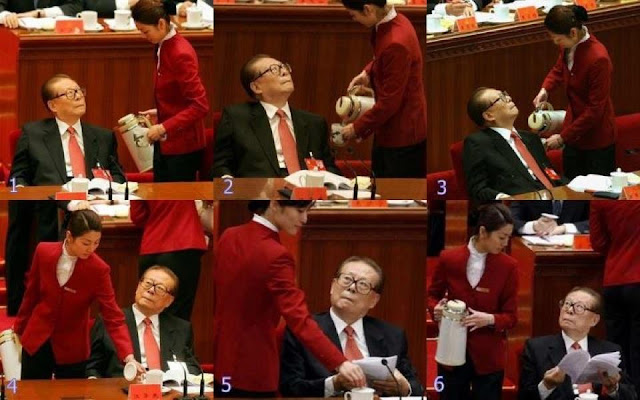 Five years ago, I wrote this text for Rediff.com.
The most striking aspect in the Tiananmen incident (and the subsequent massacre of the students on the Square) was the crucial role played by the so-called Elders and particularly Deng Xiaoping, who at that time had no official position in the Party or the Government.
You may think that the situation is different now and that things have changed. It is however not certain that the Chinese are today able to rule the Middle Kingdom in a more constitutional way.
In 1975, the CIA internally circulated a secret document entitled, "The Art of China Watching". The document declassified in 1994, is about the techniques used by professional China-watchers to decrypt China.
A para, 'The Pecking Order' explains:


Another favorite tool of the analytical trade is the scrutiny of leadership appearances. The order in which Chinese leaders are listed can be a reliable gauge of their relative standing in the leadership. The Chinese have often circumvented this system by listing their leaders in the Chinese equivalent of alphabetical order. On major holidays, the Chinese used to hold mass rallies in Peking, with the entire leadership standing before the assembled crowds. Who stood next to whom was another clue to the importance of individual leaders, but in recent years the rallies have been abandoned. Instead, several small groups of leaders appear in different parks in Peking, thus avoiding a public display of the entire pecking order.
When several important officials fail to appear over an extended period of time, it often means that a leadership meeting is in session. When at the same time the top officials in many of China's 29 provinces do not appear at home, the betting is that Peking has called in leaders from the provinces for a large meeting.

Yesterday, The South China Morning Post (SMCP) reported that the name of former president Jiang Zemin has been officially placed behind those of members of the CCP's Politburo Standing Committee.
China Central Television said that at the funeral service for General Yang Baibing  (brother of the former President, and one of the main actor on the Tiananmen Square in 1989), who died at the age of 93 in Beijing, the wreath placed in Jiang's name came behind that of President Hu Jintao , party general secretary Xi Jinping and the other members of the Politburo Standing Committee.
Observers are nevertheless of the opinion that Jiang may continue to play an important role behind the scene. The SMCP believes that the 86 years old Jiang "played a key role in the framing of the new leadership line-up for the party's 18th national congress, succeeding in getting allies including Zhang Dejiang , Yu Zhengsheng and Zhang Gaoli on to the Politburo Standing Committee."
Has Jiang now fully retired?
Beijing-based independent political analyst Chen Ziming told the SMPC that: "Jiang can still exert his power, even if he has no ranking in the top leadership", while Hong Kong-based Johnny Lau Yui-siu told the Hong Kong newspaper that the ranking did not necessarily mean that Jiang would play no role in Chinese politics from now on: "On the contrary, I think that his political influence will extend for quite a while at least."
One thing is sure, no reform will come through as long as the old man control (or remotely control) scores of senior officials in the Party.
And there will always be the danger of new wounds (such as the Tiananmen incident) in China's history.


Blindfolding us, you expect us to see no more
Plugging our ears, you want us to hear no more
Yet, the truth is in our heart
The pain is in the chest
How much longer do we have to endure
How much longer do we have to be kept silent?
If tears can wash away all dusts...
If blood can be exchanged for freedom...
Let tomorrow remember today's outcry
Let the whole world see the wound of history!