Let us hope for the best, but be prepared for the worst 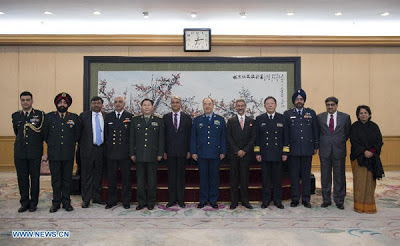 Chinese State Councilor Dai Bingguo's visit in Delhi last week, did not get much media coverage in India.
The Indian National Security Advisor's counterpart in the border talks between India and China, however met Indian Prime Minister Manmohan Singh after attending the Third Meeting of Senior Representatives of National Security Affairs of BRICS countries.
According to Xinhua, "Dai conveyed to the Indian Prime Minister cordial greetings and good wishes from Chinese President Hu Jintao and Premier Wen Jiabao, and delivered a letter from Communist Party of China General Secretary Xi Jinping."
China's new boss wrote that "China-India relations have maintained stable development in the past few years, which has brought about substantial benefits to the two countries and the two peoples."
Xi Jinping added "the world has enough space for China and India to achieve common development, and the world also needs common development."
Nothing really new.
The CCP General Secretary (and Chairman of the Central Military Commission)  affirmed that "China will, as it has been doing, pay great importance to developing relations with India and expects to carry out close cooperation with India to create a brighter future of their bilateral relations."
For Dai Bingguo in the past 10 years, "the two countries have efficiently controlled their disputes and differences and have pushed forward development of bilateral relations, while gradually finding a pragmatic way of maintaining friendly relationship of co- existence between them."
He said that in the next five to 10 years, China and India will see a strategically important period of opportunities to develop their relations.
Prime Minister Singh politely reciprocated: "New Delhi was keen of deepening India-China strategic cooperative partnership", he said.
All this is very nice, but China keeps preparing itself for any eventuality (so India hopefully does). According to China Military Online:

The PLA website says that "the level of informationization is impressive":


Many military exercises in 2012 showed that the command method and the level of the information-based weapons and equipment of the PLA are quite impressive.
The “integrated command information system” made its debut in early 2012. This self-developed command information system of China integrates various arms of the PLA’s services, namely the ground force, the navy, the air force and the second artillery force, links up command organs at various levels and the general headquarters/departments of the PLA, and connects command factors including support and information.
To better cultivate the habits of using the “integrated command information system”, many military exercises in 2012 even adopted an extreme method, namely paper-based maps were not allowed to be used for combat command.
The changes in 2012 were related to the PLA’s constant strengthening of its information-based construction for years. The powerful geographic information support system contains factors necessary for combat operations including measuring and mapping, meteorology and information. The levels of various types of information-based weapon platforms become higher and higher. The update and upgrade of the communication means make the command and control become more and more accurate.
China’s 'Beidou-II' satellite navigation system was officially enabled on December 27, 2012. The accuracy of this navigation and positioning system reaches less than 10 meters. The 'Beidou' system will greatly promote the PLA’s information-based construction. 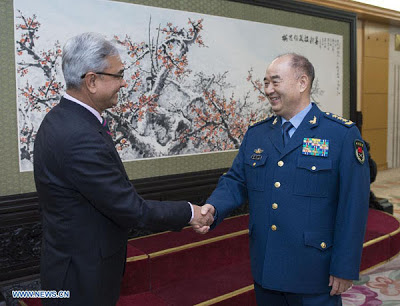 At the same time, Beijing's charm offensive continues. The Indian Defense Secretary Shashi Kant Sharma was well received in Beijing.
He met General (Air Force) Xu Qiliang, Vice Chairman of the Central Military Commission and member of the CCP Politburo.
Apparently, the encounter was extremely cordial.
Xu said: "China attaches great importance in developing military ties with India and hopes to increase mutual strategic trust, enhance friendly communication and deepen pragmatic cooperation in order to promote the strategic partnership for peace and prosperity and make a positive contribution to world and regional peace and stability."
Xu told Sharma that "the two countries have extensive common interests and developing friendly and mutually beneficial cooperation is in line with the common aspiration of the two peoples as well as global development", adding that China believes that the two countries have enough wisdom and ability to handle their relationship and are able to pave a healthy and stable development path for it.
Sharma was happy.
Let us hope for the best, but be prepared for the worst.
Posted by Claude Arpi at 7:07 AM