More than reforms, it is revolution which is required 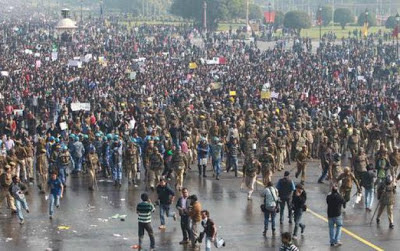 My article More than reforms, it is revolution which is required was published in DNA on December 31.
Read on...

More than reforms, it is revolution which is required
Monday, December 31, 2012
During the last few days, innumerable experts have commented on or analysed the gang rape that triggered one of the largest mass protests the capital has witnessed in recent years.
With the death of the 23-year-old woman after her doubtful transfer to a Singapore ‘specialty’ hospital, the pressure on the government is mounting.
The protesters have many demands, including removal of Neeraj Kumar, the Delhi Police Commissioner, immediate compensation for rape victims; registration of FIRs for all complaints relating to rape, sexual harassment and crimes against women and safety for women in public transport.
All this is good, but will it solve the problem?
Having lived in India for the past 40 years and closely watched the Indian society, I would like to offer a comment, which seems to me very basic.
Many have spoken of ‘fast-track’ tribunals for the rapists. This demand is an admission in itself: there is no justice in India today.
There are many reasons why it is so. To put the blame entirely on the judiciary would be wrong. As for many other issues, it appears that the system has somewhere gone berserk, and only a revolution could change the status quo.
Hundreds of examples of justice being denied can be cited, but in the end, the outcome remains the same.
The Bofors has been one of the main scandals in modern India. The then prime minister, Rajiv Gandhi, was suspected to have benefitted of kickbacks from Bofors to win a bid to supply 155 mm field Howitzers for the Indian Army. Bofors AB, a Swedish firm, was the main culprit.
The scam led to the defeat of the Congress in the November 1989 general elections.
Ottavio Quattrocchi, the middleman associated with the scandal, was an Italian businessman representing the petrochemicals firm Snamprogetti in India. He was reportedly close to the Gandhi family.
The Delhi High Court quashed all proceedings in the case in June, 2002. The order was reversed by the Supreme Court in July, 2003.
In January 2006, it was found that the CBI had unfrozen the bank accounts of Quattrocchi who could flee the country. In 30 years, no justice has been rendered.
Then remember the Bhopal gas tragedy, one of the world’s worst industrial disasters. On the night of December 2, 1984, an accident at the Union Carbide India Limited (UCIL) pesticide plant in Bhopal exposed lakhs of people to methyl isocyanate gas.
The death toll estimates vary between 4,000 and 8,000. In an affidavit in 2006, the government admitted that the leak caused 5,58,125 injuries.
Civil and criminal cases have been pending for decades in the Bhopal District Court. In June 2010, Warren Anderson, the UCIL chairman, and seven UCIL officials were convicted of causing death by negligence and sentenced to two years imprisonment and fined about $2,000, the maximum punishment allowed by Indian law. Anderson could not be extradited and a meager compensation was paid to a few of the victims. Where is the justice?
Do you remember Harshad Mehta, the Mumbai stockbroker? He was charged with financial crimes that took place in 1992.
Cleverly exploiting loopholes in the banking system, Mehta siphoned off funds from inter-bank transactions and bought shares at a premium, triggering a rise in the Sensex. He was charged with 72 criminal offences, and more than 600 civil action suits were filed against him.
Of the criminal charges brought against him, he was only convicted of one, before his death at age 48, in 2001.
These are well-publicised cases, but there are thousands, if not lakhs, of smaller cases.
Take the case of road accidents. India has the dubious distinction of having the largest number of road casualties in the world. A government report says that in 2009, 1,25,660 people were killed in road accidents and another 5,15,458 received severe or minor injuries. It has probably increased since then.
The point is that inebriated or licenceless drivers are hardly punished and the family of the dead rarely compensated. It was reported that in Tamil Nadu, which has one of the highest number of road accidents, less than two-digit licences were withdrawn last year. No justice again.
Examples could go on.
It is unfortunate that the same thing happens for rape, sexual harassment or violence against women. More than reform, it is revolution which is required.
The street protests are perhaps a first manifestation of the ‘enough-is-enough’ popular sentiment. But the government is incapable of reading the writing on the wall.
One thing is sure, don’t expect the politicians or the judiciary to take the lead to bring more justice to the common men, it will never happen.
The author is a French-born journalist and writer
Posted by Claude Arpi at 5:21 AM