Reting and the Dalai Lamas' reincarnations 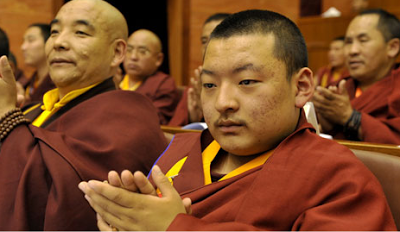 Agence France-Presse (and Xinhua before) reported that the 7th Reting Rinpoche, Sonam Phuntsok has become the youngest member of the Tibet Committee of the Chinese People's Political Consultative Conference.
The Reting incarnations have not been foreign to controversy in the past.
It is true that Beijing has recently been trying its best to increase its control over reincarnations of Tibetan lamas (and ultimately the Dalai Lama's), thus legitimizing the Communist rule over the Himalayan region.
One needs to point out that, contrary to what the AFP says, the Reting reincarnation was only one of lineages which could become Regents of Tibet and thereby conduct the identification and recognition process of a deceased Dalai Lama, (the Chinese agencies have put correctly).
By promoting the present puppet, Beijing probably believes that the new Reting will be able to 'conduct' the search for the 15th Dalai Lama.
But he himself lacks legitimacy, being a pure product of the Propaganda Department of the Communist Party of China; how could any Tibetan accepts his choice as the correct one?
More interesting, the 5th Reting who help finding the present Dalai Lama closely collaborated with the Nationalist regime of Chiang Kai-shek in the 1940s, putting the Tibetan nation in grave danger.
In an excellent book, Tibet and Nationalist China’s Frontier: Intrigues and Ethnopolitics, 1928-49, (University of British Columbia, 2006), based on the Nationalist archives in Taiwan, Hsiao-ting Lin brings new lights on this dark period of the Tibetan history.
The 5th Reting incarnation, who had the merit to direct the search party for the 14th Dalai Lama in the right direction, nevertheless played a doubtful role later. I am posting here a few extracts Hsiao-ting Lin's books:


THE KMT REGIME'S UNDERGROUND WORK IN TIBET
It is best to begin the story by tracing Nationalist China's intelligence activities in Tibet. The war of resistance against Japan forced Chiang Kai-shek's regime to retreat from coastal China to the interior. The geographical proximity of southwest China and Tibet, along with the Nationalist regime's relatively consolidated status in the southwest, provided Chiang Kai-shek with opportunities to initiate his intelligence networks within the Tibetan boundary for the first time since 1928. An MTAC [Mongolian and Tibetan Affairs Commission] wartime schedule in 1959 revealed that the Nationalists were ready not only to enlarge existing prewar intelligence units in the border areas of Kokonor, Alashan, Ordos, and Xikang, but were also prepared to install new stations in western Yunnan, Xinjiang, and Tibet. The expansion of the Chinese Office in Lhasa, as a result of the Wu Zhongxin mission of 1940, further offered Chongqing a legitimate excuse to dispatch more staff to work in Tibet. By 1945 the two major intelligence units of the Nationalist government, the Investigation and Statistics Bureau of the Military Affairs Commission, and the Second Chamber of the Ministry of Military Ordinance, respectively established their positions in Tibet. According to one autobiographical source, nearly all of the Chinese staff holding important official positions in Lhasa, such as master of the Chinese School in Lhasa, director of the wireless station, and head of the meteorological station, were serving concurrently as Chinese secret agents. The KMT [Kuomintang] Nationalists had two main objectives for their underground operations in Tibet: first, to construct a sound intelligence network throughout the whole of Tibet and recruit as many local inhabitants as possible to serve their regime, and second, to enhance the Nationalist government's links with pro-Han Chinese elements, with a view to counteracting a Tibetan government that was out of China's effective control.

...Cultivating Tibetan pro-Han factions became a more imperative goal after 1941, when the Radreng [Reting] Hutuktu [Mongol title] resigned from his regentship. During his reign, from 1954 to 1941, Radreng allowed the entry into Tibet of two important Chinese missions led by Huang Musong in 1934 and Wu Zhongxin in 1940. Wu's high-profile visit to Lhasa even constituted a huge propagandist victory for the Chinese, who claimed to have "presided over" the enthronement of the new 14th Dalai Lama. Radreng had also permitted the presence of a Chinese Office in Lhasa, and he had been more than pleased to receive honorific titles and handsome gifts from the Nationalist authorities. He was therefore generally described both in Chinese public opinion of the 1940S and over the past several decades of Chinese historiography as a ''pro-Han Chinese" Tibetan figure. 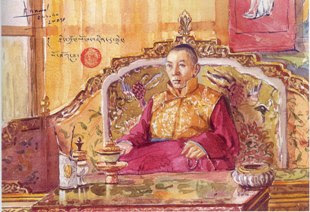 ...Despite efforts made by the capable Shen Zonglian [Chinese Representative in Lhasa] to woo important Tibetan figures over to the Chinese side, most high Nationalist officials set their hopes on the ex-regent Radreng Hutuktu, whose political weight in Tibet could not be overlooked during the closing years of the Second World War. This fact was demonstrated in May 1945, when the sixth KMT National Conference was in session. Using the name of the party leader, not the head of the state of the Chinese Republic, Chiang Kai-shek personally invited Radreng to visit Chongqing and to participate in the forthcoming event. When it became clear that the former Tibetan regent was unable to arrange his trip due to the delicate political relationship between Chongqing and Lhasa, Chiang Kai-shek still hoped that he might be able to send a personal envoy to China's wartime capital. When even this option proved to be impractical, owing to the tremendous political pressure from the Taktra administration, Chiang Kai-shek decided to appoint Radreng as a member of the KMT Central Executive Committee, an appointment that no doubt bore considerable political symbolism. Obviously, the Nationalist planners were generally convinced that Radreng would return to power, but this proved to be wrong.

In the mid-forties, when Reting started fighting with Taktra Rinpoche, the new Regent to return to power, he shamefully approached Chiang's government for support.


...NATIONALIST REACTION TO THE RADRENG-TAKTRA FRICTION
His abortive attempt to reclaim power in Lhasa caused the ex-regent to return to his own monastery hugely depressed and indignant. Thereafter, Radreng strengthened secret contacts with the Nationalist government. In a conversation with a KMT intelligence agent in Tibet, Radreng openly requested Chiang Kai-shek to help him overthrow the existing Lhasa authorities. He urged China to send troops directly into Lhasa to assist his plot against Taktra. If Chinese troops could not overthrow Lhasa authorities, Radreng suggested that Nanking should at least move Chinese troops to the border as a gesture of support. If neither of these options were possible, the ex-regent hoped that the Chinese could at least provide him with the necessary ammunition, such as rifles, machine guns, and bullets, so that he could develop his own military force. In appreciation of Nationalist aid, Radreng promised that once he had successfully resumed his position, his new regime would immediately declare its wish to join the Chinese Republic and recognize Chinese overlordship.
The ex-regent's proposal immediately caught Chiang Kai-shek's attention.

After playing the Panchen Lama's card, Beijing will try the Reting one.
But the Communist Party has no legitimacy to decide on a subject which till recently was considered in the Middle Kingdom as poison.
The Chinese new agencies give thus the pedigree of the new Reting:


When the 6th Reting Rinpoche, Reting Tenzin Jigme Thutop Wangchuk, passed away in 1997, the Tibet autonomous regional government and the Lhasa city government organized and formed one leader team and one council team according to the Tibetan Buddhist canon to look for the Yangsid [yangtsi], or the infant reincarnation candidate.
After a year's inspection activities, Lodro Gyatso, a herdsman's son from Arza township in Lhari County of Tibet's Nagqu Prefecture, was confirmed to be the 7th Reting Rinpoche.
On Jan 16, 2000, a lineage and ordination ritual was held in front of the Shakyamuni stupa in Lhasa's Jokhang Temple.
On July 14, 2000, with the mandate and entrust of the State Bureau of Religious Affairs, the Tibet autonomous regional government gave an official approval that Lodro Gyatso, born in Tibet's Lhari County on October 13, 1997, was the 7th Reting Hutuktu.
Reting Hutuktu, or Reting Rinpoche, is one of the eight Hutuktus in Tibetan Buddhism and is one of the four Hutuktus eligible to be the regent of Tibet before the Dalai Lama takes over the reins of government upon coming of age.
Reting Rinpoche lives in the Reting Monastery in Lhunzhub County in Lhasa, which is the ancestral temple of the Kadam Sect Tibetan Buddhism. Built in 1051 AD, the Reting Monastery is 350 years older than the three major monasteries in Lhasa (Gandan, Drepung and Sera Monastery).

However, the Chinese have missed an important event: the next Dalai Lama will not "take over the reins of government upon coming of age", as he has now relinquished for good his political role in favour of an elected leader.
This is probably terribly embarrassing for Beijing, as in the future, the Communist Party (or its successor) will be unable to play the Dalai Lama's card. 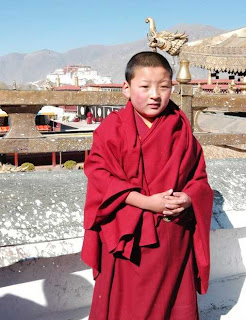 Beijing appoints teenager to Tibetan CPPCC
January, 9, 2013
Agence France-Presse
Beijing
China's choice as one of the most important figures in the Tibetan religious hierarchy, aged just 16, has been given his first political appointment, state media said yesterday.
China enthroned Sonam Phuntsok in 2000 as the seventh Reting Rinpoche, a line of figures who have traditionally taken charge between the death of Tibet's spiritual leader, the Dalai Lama, and the identification of his successor.
His selection was seen as an attempt by Beijing to increase its control over reincarnations of Tibetan lamas and to legitimise its rule over the region, with monks at the Reting monastery protesting at the time.
Now, as Tibet is roiled by ethnic tensions, the teenager has become the youngest member of the Tibet Committee of the Chinese People's Political Consultative Conference, according to China Daily.
The CPPCC is a nominated advisory body which plays a key role in policy debate in China and officially performs "democratic supervision" of the ruling party.
Following his appointment, the teenager told the state-run newspaper that he would "keep the Reting lineage of patriotism and the love for the religion".
There was no mention of the Dalai Lama in the article and his latest blog post was quoted as saying: "Don't care about who is the leader, but care about who treats the people well."
Beijing blames the self-immolations on separatist forces and the Dalai Lama, accusing the Nobel laureate of inciting the acts.
Many Tibetans accuse the government of religious repression and eroding their culture, as the country's majority Han ethnic group increasingly moves into historically Tibetan areas.
The fifth Reting Rinpoche played an important role in identifying the present Dalai Lama, who was enthroned in 1940, the Tibetan Centre for Human Rights and Democracy said.
Sonam Phuntsok was enthroned as the seventh Reting Rinpoche in 1999.
Posted by Claude Arpi at 7:37 AM