Chinese foreign minister Wang Yi’s visit to New Delhi on Saturday will not change anything in the mindset of the leadership in Beijing, and the intrusions (transgressions?) will continue. It is important, therefore, that the Indian public is aware about the history of our borders.

In July 1952, the Intelligence Bureau sent New Delhi a worrying report about the Garhwal-Tibet border; after explaining that the border in this area could “only be crossed through Mana and Niti Valleys, where there are open places and habitation, the rest of the border area consists of snow-covered mountains studded with glaciers,” it mentioned one area, Hoti, used by Indian traders going to Tibet during the warm season.
The report warned that at the end of the 19th century, the Tibetans had once established a customs post in Hoti Plain: “To stop this practice, the British government had to send out a detachment of Gurkhas along with Dharmanand Joshi, deputy collector, in 1890. This had a salutary effect and the Tibetans removed their post,” the IB report noted.
But once the Chinese appeared on the scene and occupied the plateau in 1950-51, the Tibetans became bolder: “It appears the Tibetans have again established a police-cum-customs post at Hoti during the trading season,” the 1952 IB report said. It added: “It’s quite possible that if the Tibetans aren’t stopped from establishing their post at Hoti Plain, they might eventually claim it to be their own territory. Since there is no habitation or cultivation in this area, the Garhwal authorities hardly ever visit the area or take action to denote that it lies within their jurisdiction.”
For centuries, the dzongpon (commissioner) of Daba in Tibet had sent serjis (messengers) to Hoti Plain in Indian territory to announce that the trading season had begun. As Indian traders went to Tibet, there were charged some “hospitality” taxes corresponding to the facilities they got from the Tibetan authorities (fodder for animals, etc).
In 1952, the Tibetans again shifted their “customs” camp to Barahoti. The IB then suggested sending a detachment of the Garhwal Rifles and local armed police to hoist the Indian tricolour in Barahoti “to stop the Tibetans from establishing their customs post”.
That is how the Barahoti “dispute” started. It took a nastier turn two years later, when China had established its presence in western Tibet.
It’s important to remember that the Indian and Chinese governments had signed the “historic” Panchsheel Agreement on trade and pilgrimage in Tibet in April 1954. India gave away all its rights in the Land of Snows (telegraph lines, post offices, dak bungalows, military escorts in Gyantse and Yatung), but got no assurances on the border demarcation from Beijing. 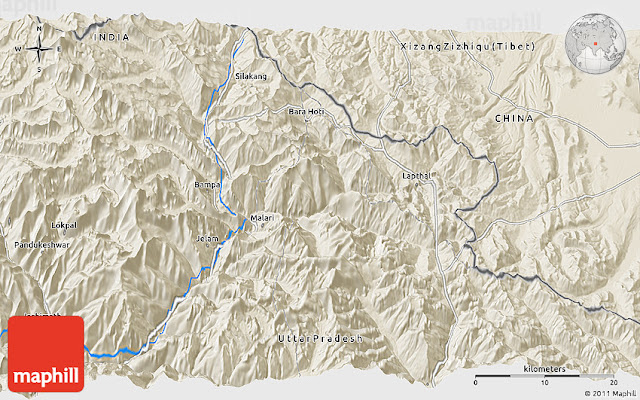 In the negotiations, Indian diplomats clearly showed that the traditional and customary boundary followed the watershed range; the passes of Mana, Niti, Tun Jun La, Balcha Dhura, Kungri Bingri, Darma and Lipulekh marked the border in the area. China agreed to name five of them in the agreement, but flatly refused to mention Tsang Chok La, Tun Jun La and Balcha Dhura.
Why? Simply because Tun Jun La is north of Barahoti in Garhwal and Balcha Dhura north of Sangchamalla and Lapthal in Almora district. Not naming these passes allowed China to later claim that these areas were located south of the watershed. The Indian negotiators were fooled... but then China, at that time, was a great friend!
The ink barely dried on the Panchsheel that China started making claims on the Indian territories. On August 13, 1954, a note from the Chinese embassy in New Delhi complained: “Over 30 Indian troops armed with rifles crossed the Niti Pass on June 29, 1954, and intruded into Wu-Je (Chinese name for Barahoti).” Beijing pretended to be shocked, saying “this not in conformity with the principles of non-aggression and friendly co-existence between China and India.” So while China had entered Indian territory, it was now blaming India!
Beijing later protested that on July 17, a 33-person unit had entered its territory... in Barahoti: “The unit was under the command of an officer called Nathauja (Chinese pronunciation), a deputy commander, the district magistrate of Walzanjapur district as well as a doctor, a radio operator and soldiers, all living in 17 tents.”
After investigations, India replied on August 27 that it was found “the allegation is entirely incorrect. A party of our Border Security Force is encamped in Hoti Plain, which is southeast of Niti Pass and in Indian territory. None of our troops or personnel have crossed north of Niti Pass.”
It is how the saga of incursions in the central sector of the Indo-Tibet (now Sino-Indian) border began.
A new terminology has been found by bureaucrats in New Delhi. It is called a “transgression”, but it doesn’t change the historical fact: Barahoti is south of the Himalayan watershed marking the border.
In 1958, New Delhi decided to try to negotiate a settlement with Beijing. Fu Hao, Chinese counsellor in New Delhi, met a MEA joint secretary several times. The Chinese suggested a joint local inquiry. Foreign secretary Subimal Dutt sent a note to Prime Minister Jawaharlal Nehru: “Our case is that Barahoti is an area of about one and a half square miles. We have given the exact position with reference to its latitude and longitude. The Chinese have not defined which area they mean by Wu-Je... an area south of Tun Jun La.” Dutt then added: “If the Chinese claims are conceded, the international boundary would lie south in what is undoubtedly Indian territory.”
The foreign secretary said: “The Chinese are apparently keen on a local inquiry because they will thereby be in a position to define the exact borders of the area which they are claiming.” But Beijing didn’t know where Wu-Je or Barahoti was located.
Subimal Dutt then concluded: “We should emphatically refuse to take any oral evidence locally. Barahoti is more easily approachable from the Tibet side than from our side. The Chinese would be able to produce any number of Tibetans to say what they (want) these people to say.”
He went on: “The Chinese government is not prepared to accept our northern border as shown on our maps, as these maps are supposed to have been prepared by British colonialists surreptitiously. They are also not prepared to accept passes mentioned in the 1954 agreement as border passes... thereby indirectly repudiating the principle of watershed as marking the international boundary.”
All this shows that the Chinese still use the same tactics (whether in the South China Sea today or earlier in Aksai Chin or Barahoti); they occupy a territory that they deem important for their own interests and later emphatically declare it has always been “Chinese territory”, which is sacred and will be defended by force if necessary.
Chinese foreign minister Wang Yi’s visit to New Delhi on Saturday will not change anything in the mindset of the leadership in Beijing, and the intrusions (transgressions?) will continue. It is important, therefore, that the Indian public is aware about the history of our borders.