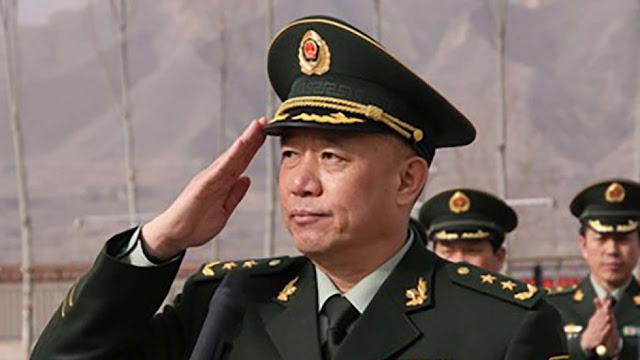 Two years ago on this blog, I quoted General Wang Jianping, Commander of the People’s Armed Police Force (PAPF) as saying that “a good chess player always takes the initiative.”
While on a visit to Tibet in June 2014, he asked the PAPF to provide a strong support for “Tibet’s continuous stability, long term stability and comprehensive stability” (he borrowed these words from Xi Jinping).
While visiting the Potala Palace Square, Wang Jianping cordially “greeted the officers and men on duty, encouraged everybody to stand guard for the Party and the people and to be on alert.”
It was ominous.
Walking to the Potala Square’s Police Station, Wang Jianping said that the police should understand in detail the nature of the work in Tibet; for example, the duty of the Police Station, the range of service and  ...the dreadful the urban grid management.
According to The Tibet Daily, Gen Wang had come to Tibet to get a better understanding of the situation on the plateau, though he already knew Tibet well, having a few years earlier, commanded the local PAPF on the plateau,
The Chinese newspapers then reported that Wang Jianping acknowledged the success achieved by the Armed Police's Tibet Corps and the Armed Police Forces and asked the armed police officers and men to understand the serious and complicated situation facing Tibet.
He also told them to strengthen the police force for war preparation.

Wang Arrested
According to The South China Morning Post (SCMP), he has now been arrested “for violating party discipline, a euphemism for corruption.”
While he was on an inspection trip, he was taken away to Chengdu in Sichuan province, along with his wife and military secretary. The SCMP adds: “His former secretary Su Haihui, deputy director of the armed police’s training department, was also taken.”
The SCMP comments: “Wang is the first general still in active military service to be brought down since President Xi Jinping launched his massive crackdown against deep-rooted corruption in the military in 2013. He is the second top general to be arrested for corruption in recent weeks.”
Obviously Wang, the chess player, did the wrong move.
He chose a bad King, former Security Tsar and member of the Politburo’s Standing Committee, Zhou Yongkang, himself behind the bars.

General Wang Jianping
Wang was born in Fushun, Liaoning province. He joined the military in 1969, and first served on the artillery force under the 40th Group Army.
In 1992, he became commander of the 120th Division of the 40th Group Army.
Thereafter he entered the People's Armed Police (PAP).
In 1996, he became head of the People's Armed Police contingent in Tibet.
In June 2009, he was promoted deputy commander of the PAPF and later in June 2012, PAPF commander.
In December 2014, he was transferred back to the PLA to become deputy chief of joint staff. It was obviously a demotion.
In January 2015, Wang became deputy head of a coordinating group on military training.
He was also a member of the 18th Central Committee of the Communist Party of China.
Posted by Claude Arpi at 1:21 PM