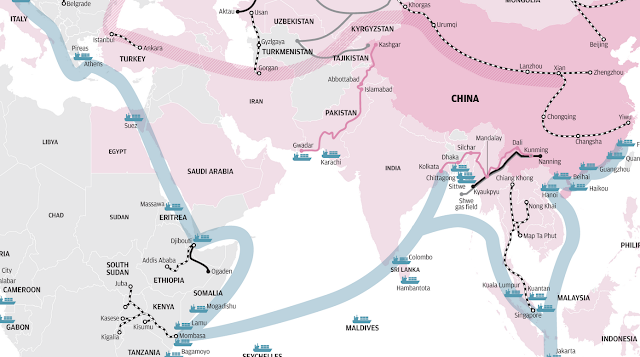 In my previous post, I mentioned the railway lines which will soon reach Purang/Taklakot, north of Pithoragarh district of Uttarakhand and Yatung in the Chumbi Valley, sandwiched between Sikkim and Bhutan.
In this connection, The China Daily published a couple of days ago, an intriguing article entitled Tibet envisioned as hub of Himalayas.
What does it mean?
Is China unilaterally planning to open/reopen the Himalayan passes which were closed in 1962, without informing India?
Today, only three passes have been reopened for trade: Shipki-la in Himachal Pradesh, Lipulekh-la in Uttarakhand, and Nathu-la in Sikkim.
According to The China Daily: “Tibet could become the cultural, economic and humanitarian hub of the Himalayas and so build a peaceful, cooperative relationship with its South Asian neighbors.”
It conveniently quotes some ‘experts’ who attended the Sixth International Forum on Tibetan Studies in Beijing.
Note that it has never been difficult for Beijing to find ‘experts’.
The article explains:


Sandwiched between the Silk Road Economic Belt and the 21st Century Maritime Silk Road, Tibet plays a significant role in connecting both initiatives, making it an ideal place for cultures to meet.

This surprising statement comes at a time when not only the Chinese ‘transgress’ into Indian territory in Chamoli district of Uttarakhand, but also adamantly refuse to reopen the main traditional route leading to the Kailash-Manasarovar, namely the Demchok-Tashigang route between Ladakh and Tibet.
Blissfully ignorant ‘experts’ like Lai Shanglong, chief economic commissioner of the United Nations Department of Economic and Social Affairs affirms:


With its beautiful thangka (Buddhist-themed paintings on cloth) and unique clothing, Tibetan culture is very attractive in the Himalayan region. Its influence can radiate through mountains and connect with other South Asian countries.

The Buddhist culture did not wait for Mr Lai to radiate in the Indian side of the Himalaya.
Mr Lai should visit the Tawang monastery, village gompas in Ladakh, Spiti or Kinnaur? Or Sikkim and Bhutan. He will realize the Buddhist culture flourishes on the Southern slopes of the Himalaya too.
The China Daily article remarks that in June [2015], “China opened a new land route along Himalayan Nathu La Pass for Indian pilgrims to visit the holy sites of Mount Kailash and Lake Manasarovar in Tibet, considered sacred by Hindus and Buddhists. The initiative was universally hailed.”
It may have been universally hailed in China, but not in India: the Nathu-la route is several times longer than the traditional route in Ladakh (via Demchok).
Why are the Chinese so quiet about the demand from the people in Ladakh to reopen the old caravan road?
It is a mystery.
After all, for centuries it has been the main (and the easiest) route to the Holy Mountain.
One of the reasons could be the proximity of the National Highway 219, infamously known as the Aksai Chin road, cutting across the Indian territory in Northern Ladakh.
Mr Lai, with his poor knowledge of the region, amazingly argues:


if China expanded its humanitarian aid projects in Tibet to other South Asian countries - providing practical services such as teaching, repairing buildings and medical treatment - that initiative would also earn praise. …This would strengthen goodwill toward China in South Asian communities, improve China's image and increase support from neighboring countries.

He does not mention Demchok nor Shipki-la or Mana-la (Uttarakhand) routes?
Let us not forget that when the government of Himachal Pradesh appealed to Delhi to make Shipki-la one of the routes to the Kailash, it was immediately blocked by China.
Liu Zhifu, director of the South Asia Research Institute at Xizang Minzu University told the Beijing Forum that “trade routes have facilitated economic and cultural interaction for centuries”.
It is true, but just look at the map of the scheme One Belt One Road.
One notices that China is ready to open new routes or corridors, but only with its friends (Pakistan, i.e. the China-Pakistan Economic Corridor and Nepal in Zham and Kyirong).
Liu Zhifu added that the Belt and Road Initiative “is breathing new life into Purang (trijunction Tibet-Nepal-India), Kyirong, Zham and other ports.”
This 'new life' will only help accelerate the process of the integration of Nepal in the Middle Kingdom.
Di Fangyao, executive deputy director of the Institute commented: “It's high time that Tibet increase its exports of locally produced goods”; he complained that the trade market in Yatung opens only for only six months “before the harsh winter sets in”.
It is perhaps true, but China is not sincere in its approach.
It should first reopen Demchok.
Let us hope that Ms Swaraj will ask her Chinese counterpart, Wang Yi, when he visits Delhi Next week: why are you so adamant to let the people and goods flow again over the Himalaya. Let the devotees wanting to visit the abode of Lord Shiva use the easiest road: Demchok or Shipki-la.
Pilgrims and traders, instead of using a long and tortuous route, could take the Ladakh or Shipki-la routes as it was done for centuries.
Incidentally, China still claims Demchok as theirs.
It would be interesting to refer the case of Demchok to the Permanent Court of Arbitration (PCA).
What right does have Beijing to claim Demchok?
None!
For centuries it has been part of the kingdom of Ladakh and remains so after the Himalayan region was integrated  into the Dogra State during the 19th century.
China was nowhere to be seen.
Like in the South China Sea and other places at the periphery of the Middle Kingdom, it is an invented claim without historical basis.
Is it this that Beijing does not want to admit?
Otherwise, why this double speak?
Posted by Claude Arpi at 11:58 AM