A Chinese Train to Sikkim? For what? 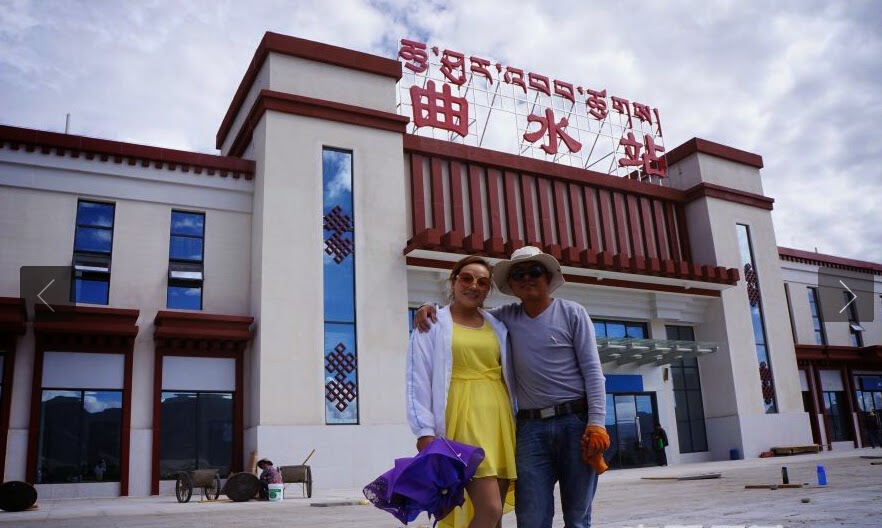 On July 24, The Global Times run a story "Sky rail to run from Lhasa to south Tibet; further railway expansion to connect Nepal, Bhutan, India by 2020."
It announced that the railway linking Lhasa and Shigatse (poetically called by China as the 'closest stretch of railway to the sky') will be open to traffic in August.
In my yesterday's posting, I mentioned that the construction of the 254 kilometers line began in September 2010.
The new  extension of the Qinghai-Tibet Railway will have 13 stations between Lhasa and Shigatse,
According to Yang Yulin, deputy director of the railway office of the Tibet Autonomous Region (TAR) government, it is the largest infrastructure project (in Tibet) during the 12th Five-Year Plan (2011-2015) with an investment of more than $1.7 billion.
Zhu Bin, a manager with a mineral company based in Lhasa told The People's Daily that "It will accelerate transportation of the mineral products, which could only be transmitted through highways that often risk being cut off during rainy seasons or see vehicle turnovers."
That is certainly one of the objectives of the train.
A Tibetan writer based in Lhasa, told the Communist newspaper that the railway will help local Tibetans to 'exchange with the outside world' and ...'tourists will be attracted to the area'.
It is clear that China is not investing 1.7 billion US $ for the Tibetans to 'see the outside world'.
The train to Shigatse has 3 basic purposes, one, to bring more tourists, the TAR's main source of revenue; two, to take away minerals to the mainland to feed the economic machine and three, to 'strengthen' the borders with India by allowing quick movement of troops and armament.
Now, more surprising, Yang announced that during the 13th Five-Year Plan (2016-2020) period, the construction of a railway connecting Shigatse with Gyirong (Kyirong) in northern Nepal and with Yatung, in the Chumbi Valley between India and Bhutan, will start.
Kyirong is a logical extension of the line as China has extensively invested in this landport to make it the main link between Tibet and Nepal, but why Yatung?
The border trade between India and Tibet is minimal as I showed in a research paper last year.
Wang Chunhuan, professor at the Tibetan Academy of Social Sciences in Lhasa told The Global Times that the railway network in Tibet will play the role of continental bridge in South Asia and promote economic and cultural exchanges.
Does it mean that China woud like to open the Yatung-Nathula-Gangtok route in a big way?
Has Beijing consulted Delhi on this or is it a unilateral decision?
The Global Times quotes Liu Zongyi, an 'expert' on India, working for the Shanghai Institutes for International Studies, saying that the "Indian authorities would certainly care about the operation of the Lhasa-Shigatse Railway that is very close to the disputed area [Arunachal?]. The Indians have lately been working on adding infrastructure in the South Tibet region, in order to strengthen control."
'Southern Tibet' is the Chinese name for 'Arunachal'!! 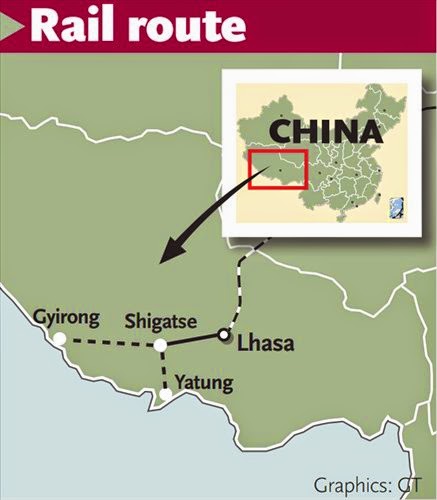 Liu explains that it is a bargaining chip.
If people on the Chinese side of South Tibet region (Arunachal) see better economic development in southwestern Tibet (Shigatse and Ngari) they will be tempted to join the People's Republic.
This is of course a Chinese Dream.
But the move towards Yatung is indeed a bargaining chip at another level.
Liu admits: "The growing railway network will increase Chinese activities in this area, balancing Indian moves."
China is nervous about the raising a 'mountain strike corps', XVII Corps, with its headquarters at Panagarh in West Bengal, not too far from Sikkim (and Yatung).
When fully operational (by 2018-2019), the Corps, costing some Rs 64,678 crore to the Indian tax-payers, will have 90,274 troops.
The Corps which will be spread on the 4,057-km Line of Actual Control (LAC) from Ladakh to Arunachal Pradesh; it will have two high-altitude infantry divisions (59 Div at Panagarh and 72 Div at Pathankot) with their integral units, two independent infantry brigades, two armoured brigades.
It will also include 30 new infantry battalions and two Para-Special Forces battalions.

Incidentally, the projected railway line to Yatung perhaps explains the inflated size of the Chumbi Valley in the newly published Chinese maps. Huge chunks of Bhutanese territory have been engulfed in the Chumbi Valley.

It is a fact that XVII Corps makes China nervous.
China will not certainly not invest billions of dollars to built "a continental bridge in South Asia and promote economic and cultural exchanges", but balancing the developments on the Indian side, is worth a few billions dollars.
On the Indian side, the government is said to have cleared the construction of four militarily strategic railway lines in the Himalayas; 3 of them are in Arunachal Pradesh and one, to Leh in Jammu and Kashmir.
According to the Free Press Journal, the new rail lines will enable rapid deployment and movement of forces across the rugged, inhospitable and mostly snow-bound terrains. This is India’s first foray in the upper Himalayas to match the railway lines built by China connecting almost all areas on its side of the LAC.
The construction is expected to begin next year, though land acquisition and preparation of the detail project reports will be done during this financial year.
Also important to India, the railway linking Lhasa to Nyingchi Prefecture, located north of the McMahon Line, which is expected to start in a few months. It is also part of the 13th Five-Year Plan (2016-2020).
India should watch and act fast.
Posted by Claude Arpi