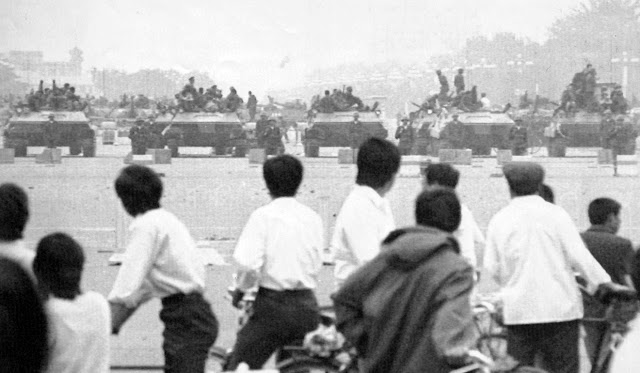 Thirty years after the massacre at Tiananmen Square, coerced collective amnesia envelops the Chinese nation about that horrific event.
Claude Arpi glances back at how the student uprising could have changed the Middle Kingdom forever had the Chinese Communist party not traveled on the route of martial law.

In 2005, I wrote a piece The Day Chinese Glasnost Died for Rediff.com.
Former Chinese Premier Zhao Ziyang had just passed away.
Can you believe that fourteen years later, the leadership in Beijing is still afraid of Zhao's ghost.
On January 17, 2013, The South China Morning Post had reported: "More than 100 mourners flocked to a traditional house in a quiet alleyway in Beijing yesterday morning to pay their respects at the home of the late Zhao Ziyang on the eighth anniversary of the ousted party chief's death," explaining “before his death, Zhao had been under house arrest at the courtyard home at No 6 Fuqiang Alley since opposing the use of military force against the Tiananmen Square demonstrators in 1989.”
Bao Tong, Zhao Ziyang’s secretary, who published the former Premier's memoirs, Prisoner of the State: The Secret Journal of Premier Zhao Ziyang, knew the implications of being close to Zhao: his home telephone was constantly tapped, he was followed everywhere he went and he was banned from approaching 'sensitive' events or places.
The situation in the Middle Kingdom has not improved, it has even worsened; while aiming at becoming the World Economic Power No 1, with a myriad of stealth jet planes, warships (soon three aircraft carriers), with the latest missiles and futuristic gadgets using Artificial Intelligence (AI) to monitor the life of the ‘masses’, China seems unshakable; but the ‘human’ intelligence and humanity symbolized by Zhao, has disappeared entirely from China, to be replaced by a authoritarian system (and even worse for places like Xinjiang).
Six years ago, Bao had explained why Zhao was not popular with the regime; China's former Premier simply treated people as human beings. Bao elaborated, “This doesn't sound very extraordinary …he was instrumental in protecting the autonomy of farming communities, because he saw farmers as people. He was instrumental in protecting the autonomy of enterprises, because he saw entrepreneurs and their workforce as people. He was instrumental in stopping the Party pronouncing on everything, because he didn't see the Party as a judge…”
Today, the Party is above everyone, monitoring and controlling everything.

What happened thirty years ago?
In January 1987, another great Chinese leader, Hu Yaobang was sacked as the Communist Party’s General Secretary; on April 9, 1989, still a member of the Politburo and entitled to attend important meetings, while uttering strong words and speaking of the Communist Party's failures, the respected Hu had a stroke. A week later, he passed away.
Zhao Zhiang, then secretary general of the Chinese Communist Party, made the customary brief assessment of Hu's life: “Comrade Hu was a loyal, tried and tested Communist fighter, a great proletarian revolutionary and politician, an outstanding political worker for the Army.”
It was agreed that Hu would have a national funeral service reserved for the Politburo’s Standing Committee members. But in the afternoon of April 17, 600 students of the Chinese University of Political Science and Law marched into Tiananmen Square with mourning banners and wreaths. They were 10,000 by the evening.
The next day, students and onlookers poured in from Beijing University and other places. Wreaths accumulated in front of the Monument to the Revolutionary Heroes.
The rest is history. It was the beginning of the largest spontaneous student revolution since 1919.
One man played a major role in the Tiananmen events - Zhao Ziyang. Having the same conviction as Hu Yaobang, he saw that the possibility of political reform existed in Communist China. During the following weeks, he constantly tried to negotiate a compromise with the students. This could have changed the Middle Kingdom's fate. It was not to be.
On May 20, the martial law order was signed by Prime Minister Li Peng. Two days later, Zhao Ziyang was sacked and Jiang Zemin was called from Shanghai to replace him.
During the night of June 3, Li Peng ordered the tanks to roll on the Square. Some 3,000 students are said to have lost their lives that night. The Party was saved and the fate of China was sealed (at least for the next few decades).

Thirty Years Later
Today, the momentous events on the Tiananmen Square have been erased from the public memory; nobody wants to remember the June 4 massacre. Cary Huang, a senior columnist with The South China Morning Post, wrote recently: “In 2019, China ushers in a year full of both festive jubilation and political trouble. Its communist leadership places enormous emphasis on the anniversaries of important historical events …China has a lot to celebrate in 2019 but it also has old wounds to heal.”
Huang noted that with its packed 2019 calendar of commemorative events, Beijing may ‘forget’ some of them, “many of which are politically charged or divisive. For a nation moving forward, it’s time to acknowledge the difficult past,” he argued.
It will not happen on June 4; already on March 28, Beijing selectively remembered the date as the 60th anniversary of Serfs Emancipation Day; but what was this emancipation?
March 28, 1959 marked a massacre of the Tibetan population in Lhasa and the Communist Party taking full control over the Tibetan capital; 18 days earlier, the Dalai Lama had fled the Roof of the World to take refuge in India. On March 28, the revered Lama was sacked as chairman of the Preparatory Committee for the Tibet Autonomous Region and was replaced by a (then) more pliant Panchen Lama.
While these events are forgotten, the May Fourth Movement which took place in 1919 in the Chinese capital has been celebrated with pomp; on that day, students started protesting against the nationalist Government’s weak response to the Treaty of Versailles, allowing Japan to control the territories surrendered by Germany in Shandong.
On the occasion, Xi Jinping affirmed that patriotism was the core spirit of the 1919 event. He added that the May Fourth Movement inspired the ambition and confidence of the Chinese people and the nation to realize national rejuvenation. “It was also a great enlightenment and new cultural movement of disseminating new thought, new culture and new knowledge,” Xi said. But, of course, the students of 1989, did not exist, though they also wanted a better China.
On May 27, The South China Morning Post published an article entitled Generation Amnesia explaining why China’s youth don’t talk about Tiananmen; it looked at how censorship, silence and time have created a gulf between the young people who witnessed the events and those who came after them.
The Hong Kong newspaper quotes several witnesses of the tragic events, including Zhang Shijun, a medic with the People’s Liberation Army’s 54th Army Group, one of the military units engaged in enforcing martial law in Beijing; Zhang preferred that his daughter remains unaware of what happened.
Andrew Nathan, who compiled the Tiananmen Papers says that the Communist Party imposed complete censorship of June 4 because even discussing the possibility of ‘errors and crimes’ would make the party’s will to power seem weak: “Controlling speech sends a message that the party will not allow any opposition, and this message of determination makes people afraid that if they talk about forbidden topics they will be punished,” he said.
The lofty concepts of freedom and liberty have entirely disappeared from today’s China; a Reuters article describes how China's robot censors work overtime for this purpose.
The news agency affirms: “Censors at Chinese internet companies say tools to detect and block content related to the 1989 crackdown have reached unprecedented levels of accuracy, aided by machine learning and voice and image recognition.”
Two employees at Beijing Bytedance Co Ltd, a ‘censoring’ firm, said that censorship of the Tiananmen crackdown, along with other highly sensitive issues including Taiwan and Tibet, is now largely automated: “Posts that allude to dates, images and names associated with the protests are automatically rejected.”
They explained that AI is much more accurate, than the human intelligence.
Reuters commented: “June 4 itself is marked by a cat-and-mouse game as people use more and more obscure references on social media sites, with obvious allusions blocked immediately …even the word ‘today’ has been scrubbed.”
A question remains, how long can liberty and freedom of thought be stifled.
Certainly not for ever.
Posted by Claude Arpi at 6:38 AM