In the New Era: National Laws are Higher than the Buddhist Canon

The Chinese-selected Panchen Lama, Gyaltsen Norbu recently visited Thailand. On his return to Beijing, he affirmed “that he was able to deeply appreciate the greatness of the motherland while he was in a foreign country.”
It is a month after Norbus' foreign visit that Xinhua announced that he was part of a Buddhist delegation led by Yanjue, the acting President of the Buddhist Association of China, who traveled to Thailand to attend the ceremony on the occasion of festival of Vesak.
It was said that it was the Panchen Lama's first trip abroad.
Interestingly, Gyaltsen Norbu had spoken at a Buddhist conference in Hong Kong in 2012.
This is not counted as a foreign visit!
In Hong Kong, Norbu had said that he valued inner sciences.
In Thailand, he gave a speech on Let the Light of Compassion and Wisdom Shine upon the World, asserting that since he came “to the foreign country, he could personally better understand the vastness of the motherland, the profound cultural heritage of the Chinese nation, and the unity and harmony of the three major Buddhist communities in China.”
He remarked: “We are fortunate to be in the era of the development and rise of New China, and thank the Communist Party of China for leading the Chinese people in achieving the tremendous transformation of standing up, growing rich, and becoming strong.”
He further emphasized that he has a responsibility and an obligation to guide Tibetan Buddhism to adapt to the socialist society with Chinese characteristics, "to constantly adhere to develop Tibetan Buddhism in the Chinese context, to maximize the positive role of religion, and to make due contributions to safeguarding the unification of the motherland and promoting ethnic unity."
What a program, but what does “adapting Tibetan Buddhism to the socialist society with Chinese characteristics” mean?
An article on a Chinese website run by Xinhua gave an answer.

Testing the monks’ and nuns’ legal knowledge
All monks in Tibet had recently been invited to pass 'legal knowledge' examinations: “In order to promote the basic and leading role of the rule of law, and actively guide the adaptation of religion to the socialist society, and enhance the legal knowledge level and the rule of law awareness” among monks and nuns in Tibet.
You perhaps thought that monks and nuns were supposed to specialize in the Teachings of the Buddha, but in the New Era, they need to be lawyers too.

A New Vinaya?
Xinhua reported that the new program was are jointly organized by the Tibetan Autonomous Region’s Justice Department, the Law Office, the Communist Party’s United Front Work Department and the Religious Bureau. According to the statistics quoted by Xinhua, some 30,000 passed the examination.
On which topics were the tests conducted?
The monks had to answer questions on the Chinese Constitution, the State Security Laws, Anti-Terrorism Laws, Anti-Spying Laws, Environmental Protection Laws, Internet Safety Laws and Regulations on Religious Affairs Matters.
Quite comprehensive?

But where is the Buddha?
All the top TAR’s ‘legal’ big shots visited the test centers.
Lobsang Gyurmey, vice chairman of the Political Consultative Conference and Danba, the Head of the TAR Justice Department inspected the Ganden Monastery's examination center.
Gao Yang, deputy secretary and vice chairman of the Party Committee of the Political Consultative Conference, inspected the test center at Sera Monastery, he was accompanied by Jayong Rinchin, Inspector in the Justice Department. Similarly, Drepung and other monasteries were ‘inspected’ at the time of the examinations.
Xu Xueguang, deputy director of the People's Congress Standing Committee, and the vice chairman of the District Political Consultative Conference and Sonam Rinchen were spotted in Drepung Monastery.
Jigme Gyalpo, Deputy Head of the TAR Justice Department was also on the job, conducting “in-depth inspections and guidance at the examinations’ scene.”
According to Xinhua, after the launch of these (compulsory) tests, “the legal literacy and the rule of law awareness of religious faculty members in our Region have been further improved.”
The website affirmed that “National laws are higher than religious canons and obeying these laws should come before adhering to (Buddhist) precepts”; all this in order to create a harmonious and stable social situation for Tibet.
The examinations created “a good atmosphere of the rule of law.”
In these circumstances, one understands that students in Hong Kong or in Taipei are a bit nervous, to join the Motherland’s ‘legal system in the New Era’.

All over Tibet
Examinations were conducted all over the ‘Autonomous’ Region, particularly in Shigatse, in Lhoka (Lhuntse County), in Nagchu, and Shangda Monastery in Chamdo area.
According to a notice of the United Front Work Department, the People's Committee, the Justice Department, the Religious Office and the Law Office worked hard for implementing the “Legal Knowledge Examination for Religious Faculty” in the entire Region.
A Notice entitled “Doing a Good Job in the Legal Knowledge Examination for Religious Faculty in the Region" required that by March 20 all the monks and the monasteries’ faculty members should be ‘uniformly’ tested.
The examination was conducted in two ways: a Tibetan-Chinese bilingual ‘open-book’ written test and an oral test.
Apart from the topics mentioned above, the questions checked the knowledge of the monks and nuns on the Communist Party's 19th National Congress, Xi Jinping's New Era of Socialism with Chinese characteristics, the Chinese Constitution, the National Flag Law, the National Anthem Law, the National Security Law, the National Regional Autonomy Law, and the Religious Affairs Regulations, and other party ethnic and religious policies and related laws and regulations.
This probably included the Rules for the Reincarnation of ‘Living Buddhas’.
Was the traditional system of debates practiced, is not mentioned.

The Patrols
Xinhua reported that in order to ensure the smooth and orderly examination, “a three-level patrol test group for districts, cities and counties” was formed.
The patrols checked each test center under their jurisdiction.
Moral of the story: “you better know Comrade Xi’s speeches,” because the patrol teams went “deep into the relevant temples to conduct an in-depth and detailed understanding of the examination arrangements and the order of the examination room.”
Xinhua explained that the legal knowledge test for religious faculty members is “another regional large-scale event since the launch of the Seventh Five-Year Plan."
Earlier 'tuition’ activities, and calligraphy contests were organized for the local monks and nuns.
The attendance of the examination was 100%.
It is a follow-up of the Communist Party's 19th National Congress, keeping in mind the spirit of the Tibet Work Forum. It is said that was an important initiative of Party Secretary Wu Yingjie for “strengthening the education on the rule of law.”
Will Comrade Wu get a promotion for organizing these tests?
Future will only say, but according to the news agency, “The purpose was to further promote the rule of law awareness and legal knowledge.” And more importantly to firmly establish the concept that “National law is higher than the Buddhist Canon” and of course for strengthening national unity, safeguarding the unity of the motherland, and striving for patriotism and law-abiding…

Is it why Gyalsten Norbu deeply appreciated the greatness of the Motherland when he was abroad?
I am wondering what would have Karl Marx and the Buddha have thought of the exercises.
They would have probably had heart attacks …for different reasons.
What would have been the reaction of Chairman Mao? I leave to you to guess.
These few photos speak for themselves. 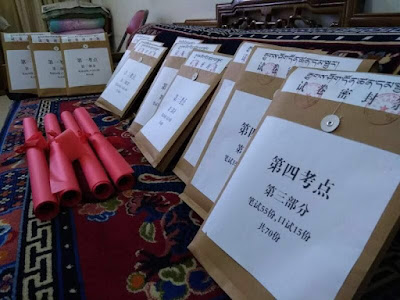 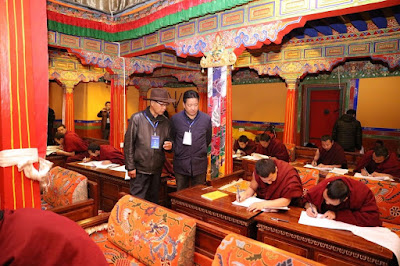 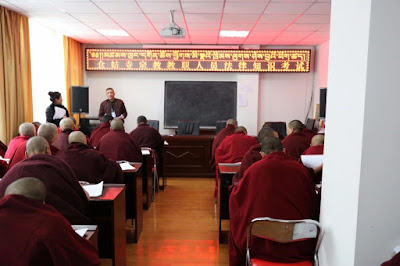 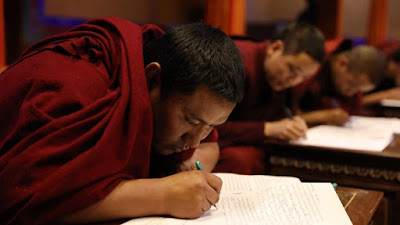 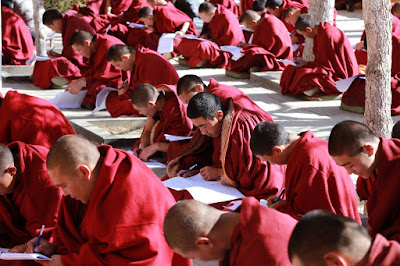 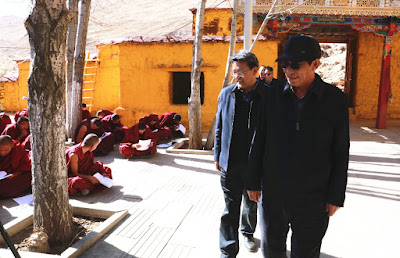 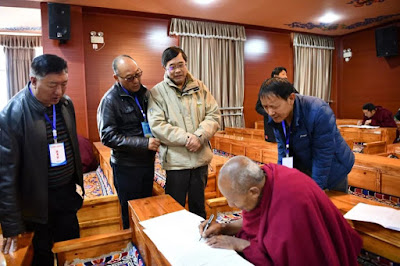 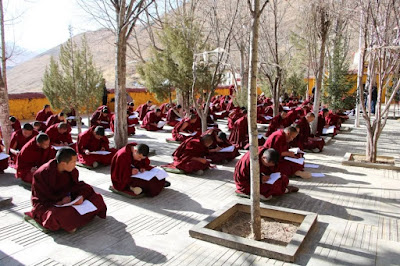 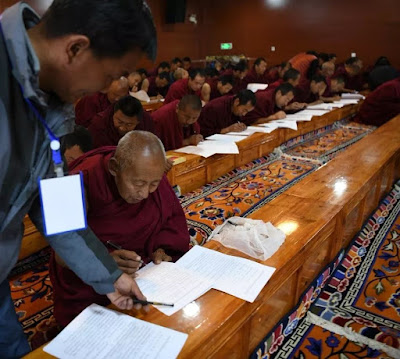 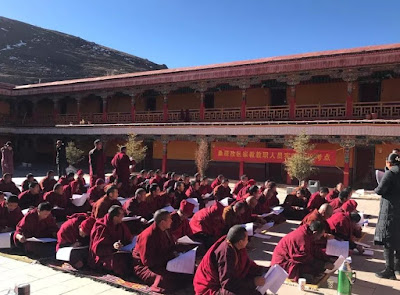 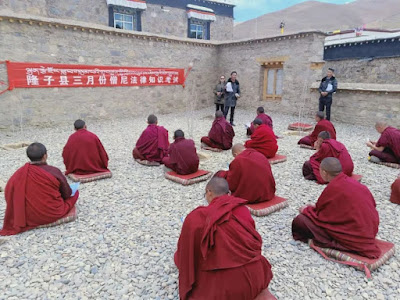 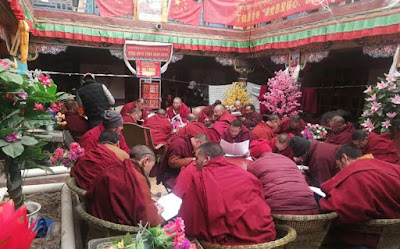 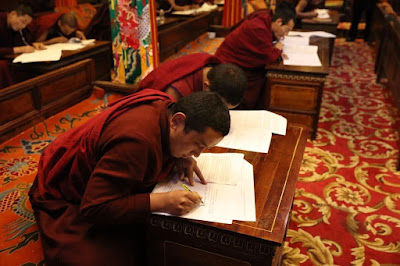 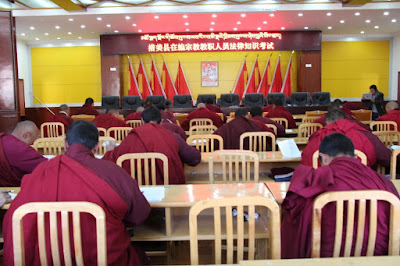 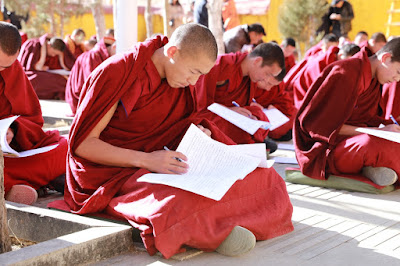 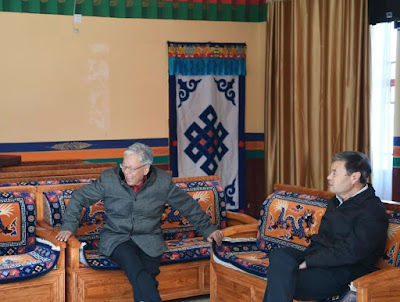 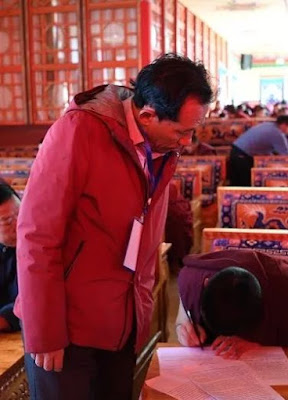 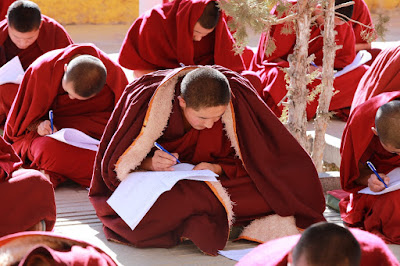 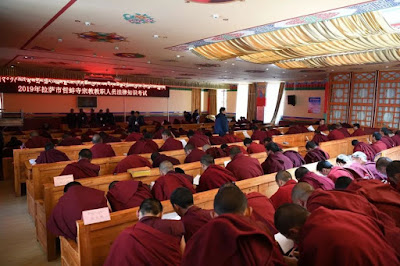