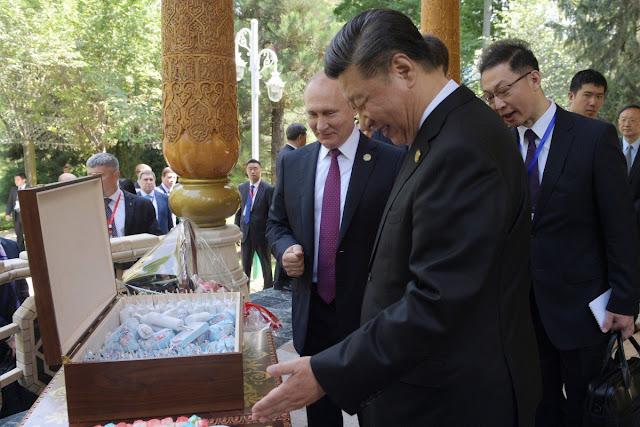 My article Of Allies, New & Forgotten was published by Mail Today.

The relations between World powers is getting more complicated, more difficult to comprehend, simply because they are often based on deep prejudices.
In an interview to media outlet Mir TV, Russian President Vladimir Putin spoke of the US-Russia relations: “They are in fact deteriorating, getting worse by the hour.”
President Donald Trump had earlier called Russia an ally: he had affirmed that he and Putin discussed “forming an impenetrable Cyber Security unit” to stop election hacking. But that was months ago.
Today all is not well! The relations between the West and Russia have reached an all-time low.
On the occasion of the commemoration of the 75th anniversary of D-Day, CNN asked: “Why wasn't Putin invited to D-Day event?”
Putin had been attending such functions in the past. In 2014, he had gone for the 70th anniversary of the landings of the Allies. When asked why he was not invited, Putin tried to cool down the situation: “Why do I have to be invited everywhere to some event? Am I a wedding general, or what? I have enough of my own business. This is not a problem at all.”
But the general impression was that President Trump had influenced his ‘allies’, first Emmanuel Macron of France not to invite Putin.
CCN said that there is a longstanding Russian grievance: “The perception that the Soviet population's massive sacrifices in World War II have been somehow overlooked in the West.”
Putting aside the Second Front in Normandy, Putin explained: “The first [front] was with us [the Soviets]. If you count the number of divisions, the strength of the Wehrmacht [the German army] who fought against Soviet troops on the Eastern Front, and the number of troops and equipment that fought on the Western Front from 1944 on, then everything will be clear.”
Sixteen heads of States and Governments were represented in Normandy; apart from Macron, Trump and Queen Elizabeth II, leaders from Slovakia, Canada, Poland, Luxembourg, Norway, Belgium, and others such as New Zealand's Governor-General and the German Chancellor were in attendance.
Russia should have been present, when the countries pledged: “We salute the surviving veterans of D-Day and we honour the memories of those who came before us. We will ensure that the sacrifices of the past are never in vain and never forgotten.”
Le Figaro said that the explanations given by the Elysée (French President’s Residence) were rather confused: “It is a choice which has been made,” the newspaper was told. Under US influence …or threat?
Though russophobia has been running high in Europe since a few years, The Figaro, like most of the French press was surprised.; the national daily quoted Jean de Gliniasty, former ambassador of France in Russia (2009-2013): “Explanations [from l’Elysée] are not convincing, this choice is incomprehensible.”
The former diplomat, a specialist in Russian issues at the Institute of International and Strategic Relations (Iris) noted that "instead of going to the West to celebrate the victory over Nazism, Putin will take care of the Chinese [president] in Moscow and St. Petersburg.”
That is the issue.
The Western nations’ ‘hatred’ of Putin will only push the Russians into the arms of the Chinese. While the Western leaders were on the windy beaches of Normandy, Vladimir Putin received President Xi Jinping in pomp in St Petersburg for the inauguration of the 23rd St. Petersburg International Economic Forum.
Xinhua reported: “Hailing the beautiful scenery and attractive art and culture, Xi said St. Petersburg has witnessed a lot of significant historical events.” He pointed to the “huge sacrifices for the victory of the world anti-Fascist war and important contributions, and is the pride of Russia and the Russian people.”
Xi also recalled that the October Revolution which played an important role in the birth of the Communist Party of China.
Perhaps more importantly for the world, the Chinese president observed: “Under the current circumstances, the two sides should deepen strategic coordination, not only to safeguard the interests of China and Russia, but also to defend basic international norms and justice as well as world peace, security and stability.” There might be few takers for these pledges, but Putin added: “The more complex and volatile the international situation is, the more Russia and China should consolidate and deepen political mutual trust, boost coordination and cooperation in international affairs, and safeguard international law and basic norms of international relations.”
The Russian president gave a vivid account of how the two good friends “drank a shot of vodka together and sliced sausages”.
The South China Morning Post commented: “[Putin’s] comments come at a time when Xi is edging closer to the authoritarian Russian leader as Beijing’s relations with the United States become increasingly fraught. Their increasingly tight-knit relations are also a result of Donald Trump’s aggressive and capricious foreign policy.”
In fact, Beijing is a far more authoritarian regime that Moscow; just look at the recent events in Hong Kong, China’s pressure on Taiwan, the happenings in the South China Sea, the tragic situation in Xinjiang or Beijing’s constant support to Pakistan.
Nobody in the West seems to grasp this aspect.
In this polarized atmosphere, Prime Minister Narendra Modi arrived in Bishkek, the Kyrgyz capital for the Shanghai Cooperation Organisation Summit. He met both the ‘good friends’.
Indeed it is an achievement for India’s foreign policy that the Indian Prime Minister managed to be positive with both; India’s Foreign Secretary even announced that Xi confirmed his visit to India later this year. Earlier, Prime Minister Modi had tweeted that his meeting with President Putin was ‘excellent’.
And in ten days time, Modi will receive Mike Pompeo, the US Secretary of State.
In today’s world, nobody can be excluded, even the so-called ‘bad guys’. The West will have to learn this lesson the hard way one day.
Posted by Claude Arpi at 10:25 AM