The Importance of Yatung and Chumbi Valley

Yatung (called Yadong by the Chinese) has been in the news recently.
One of the reasons might be the annual opening of the Nathu-la pass for trade between India and China (Yatung is also one of the routes for the Kailash-Mansarovar Yatra for Indian pilgrims).
China Tibet Online noted: “The Natho [Nathu] La Pass Trade Channel in Yadong [Yatung] County, Shigatse City, southwest China’s Tibet opened on the morning of May 1.”
Note the compulsory ‘China’s Tibet’!
Does it mean that Beijing has a doubt about the ownership of Land of Snows?
Nobody in India would think of writing ‘India’s Tamil Nadu’ or ‘India’s West Bengal’ or in the States, ‘United States’ Virginia’.
The official website, affiliated to Xinhua, informs its readers: “The Natho [Nathu] La Pass is the only land route trade pass between China and India, and it is a seasonal trade port.”
This is wrong statement as Lipulekh-la (Uttarakand) and Shipki-la (Himachal) are also opened for official trade between the two countries.
The article continues its description: “It opens each year between May and November and remains closed between December and April. While it is open, residents in the border regions of Yadong County in China and Sikkim in India can travel back and forth to conduct in normal trade activities using border residents’ certification cards.”
It adds that to monitor the “smooth operations of trade and daily border checks, civil police have already been deployed to the Yadong Border Entry and Exit Inspection Station and actively contacted joint inspection units to carry out convenient service measures.”
The border is clearly opened for traders only, not for Indian tourists (apart from the yatris who zoom through the town on their way to the base camp).
Further, we are told that the Chinese staff is taking Hindi and Nepali language classes, which is probably not the case of the Sikkimese staff (learning Chinese).

International Border Trade Festival
On May 30, China Tibet News announced that the First Yadong International Border Trade Tourism and Culture Festival was to be held from June 2 to 8: “During the festival, bonfire party, photography, calligraphy and painting exhibition, commodity fair, fitness activity, investment invitation and other activities will be held.”
Will this help promote trade?
Most certainly not, but the Chinese authorities are keen to develop Yatung as tourist spot.
The website says: “Yadong is one of the most pleasant border towns on the Qinghai-Tibet Plateau. It has six kinds of comprehensive and professional natural tourism resources for tourists to choose, including historical and cultural tourism, natural ecological tourism, ethnic festival tourism, hiking adventure tourism, self-driving special tourism and border trade characteristic tourism. Besides, it is also rich in tourism resources, and its main attractions include Dromo Lhari [or Chomolhari] Snow Mountain, Natoi [Nathu] La Mountain Pass, Khambu Hot Spring, Dungkar Monastery, Kagyu Monastery, Phari Grassland, Ruins of the Customs of Qing Dynasty, Rinchengang Border Trade Market.”
The so-called occupation of the Chumbi Valley by the Manchus is a new way to rewrite history and show that these areas close to the Indian border have always belonged to China …and are part of the Silk Road, dear to Chinese President Xi Jinping.
(for the Qing Dynasty Custom House, read my Archeology and Politics).
Dungkar Gompa has historically been one of the main centers for the practice of the violently anti-Dalai Lama, Shugden cult.
The article does not mention the beautiful India House which has been destroyed by the Chinese authorities as a remnant of the Indian presence. 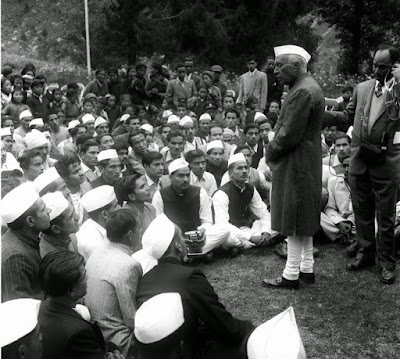 Nehru’s visit
When Prime Minister Nehru visited Yatung and the Chumbi Valley in September 1958, he asked to meet the Indian traders in the Yatung bazaar. There were some fifty Indian shops then.
KC Johorey, who served as Indian Trade Agent, remembers that as soon as he reached, the Prime Minister changed from riding kit and breeches into the sherwani and churidar pyjamas and put on a red rose; he then asked how far the bazaar was.
When Johorey told him a hundred yards down the hill, the Prime Minister started walking, and Nehru went down to the bazaar. The ITA had requested the Indian traders to wear a cap: “they were all with their caps on, even the panwallah.”
The Chinese were extremely upset with this unscheduled visit, but the Indians and Tibetans were delighted, they rushed towards Jawaharlal Nehru: “Somebody was touching his hands, somebody laying flat on the ground and somebody offering him flowers. The Indians were very well disciplined as they stood there.”
Colonel Lu, the local Political Commissar came and asked Johorey: “What is this? We did not have this programme, why have you come here?”
The ITA could only say: “He is my boss and your guest. You tell him; you tell him to go back as his security is your responsibility. I cannot ask Prime Minister what [he should] do or what not to do.”
Finally, Colonel Lu could not prevent the Tibetans from approaching and getting near the Prime Minister: “Some of them were crying. …Their sobbing and tears were more eloquent than any formal parlays. There was Tibetan disapproval of the Chinese at every stage.”
Sixty years ago, the Chinese were already not feeling uncomfortable with the Indian presence in the Valley. 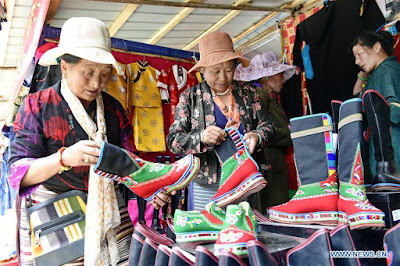 International Border Trade Festival
The Chinese authorities have now organized a 'trade' festival. Nyigar, director general of the Culture and Tourism Bureau of Yatung County, gave a speech at the opening function; he affirmed that Yatung “has always been a passage and border town leading to South Asia. It is the last stop of the Ancient Tea Horse Road, with rich historical and cultural deposits. We will focus on creating a high-end tourism route with characteristics of the border tourism destination in Tibet, and truly build cultural tourism into the pillar industry of the county.”
Once again, it is only a one-way tourism, as the Sikkimese traders have to return at night and Indian tourists are not permitted.
China Tibet Online observed that the First Yadong International Border Trade Tourism and Culture Festival wanted to “fully display the profound historical and cultural resources, magnificent tourism resources, fast and convenient border trade channel of Yadong County, improve its popularity and influence, drive the development of border trade, invigorate the county's economy, as well as increase the income of the masses.”
What is strange that tourism does not really increase the revenue of the masses.
According to Chinese statistics, in 2018, Yatung County received 119,870 tourists (an increase of 43% compared to the previous year), but the revenue from this activity was only 33 million yuan (5.3 million US $). It does not come much by head.
Worse during, the first quarter of 2019, Yatung received 43,620 tourists and got a revenue of 4.52 million yuan (730,000 US $). Obviously, the Chinese tourists are not spending much money (yuan 100 per head).
These ridiculous low figures are a mystery; either the authorities had their figures wrong or the visitors were not tourists!

Strategic location and Xiaogang Villages
It is true that the Chumbi Valley has been the base for Doklam operations in 2017, as well as for any military development in North Sikkim (Kampa Dzong area).
It is worth watching.
At the same time, it looks as if the authorities are encouraging migrants to come in the area.
On April 29, an article in China Tibet News said that Yatung County “has insisted on the construction of well-off villages.”
I have often mentioned on this blog, the Xiaogang villages built by Beijing near the Indian borders.
The Chinese website pointed out that it was “an important starting point in implementing rural revitalization strategy.”
What means a ‘revitalization strategy’ so close from highly sensitive border.
The article further explained that the county has adapted measures “to develop local industries, so as to ensure people living and working in happiness, peace and contentment” 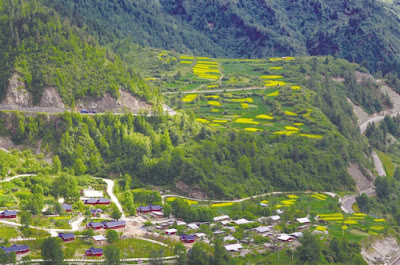 Apparently the construction of nine 'well-off' villages has started in the Chumbi Valley “implementing characteristic agriculture and animal husbandry projects.”
The article also noted that Yatung has set up a Communist Party's Leading Group to look after the construction of the villages and promote their overall management: “To build featured small town, it has integrated Tibetan people's traditional living habits into urban construction, separated the production areas and living areas, stepped up infrastructure construction such as water, electricity, road as well as telecommunication, and improved public service facilities including village committee, clinic and culture activity room and others to follow the construction requirements.”
All this is for the local population, for the tourists or for the People’s Liberation Army?
There is no answer right now, but it is certainly part of ‘stabilization of the border’ dear to Chairman Xi, the boss of the Central Military Commission.
Another website carried a series of photos of Yatung-by-night with the following caption: “Photo shows the Yadong County in Shigatse City, southwest China's Tibet Autonomous Region, is quiet and bright under the dazzling light after nightfall. In 2017, Yadong County became one of the five counties that got rid of poverty in the region. The county is clean and its infrastructure is complete nowadays.”
Not fully completed as the train is expected to reach Chumbi Valley in 2030. 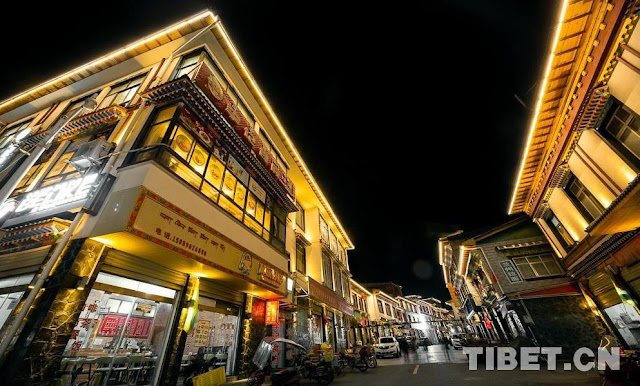 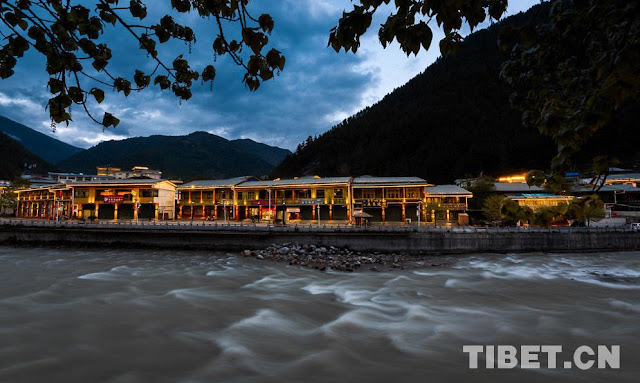 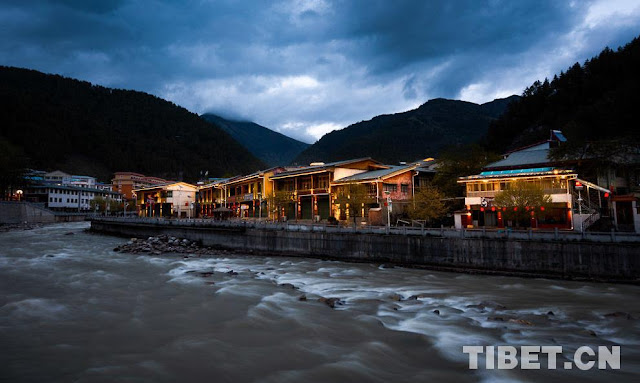 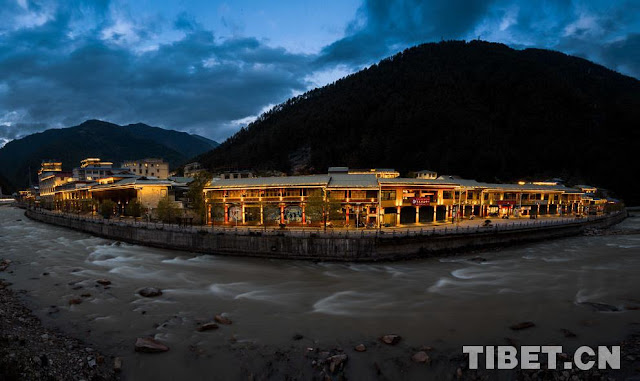 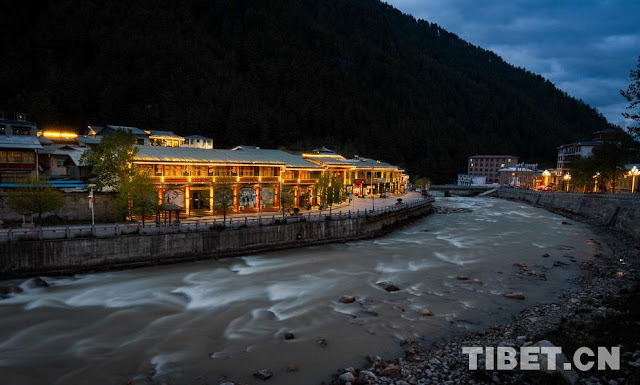 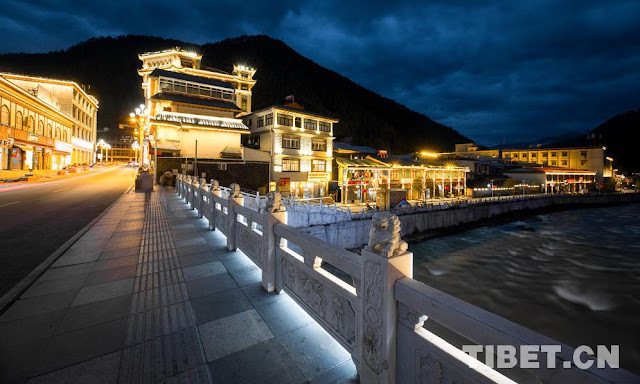 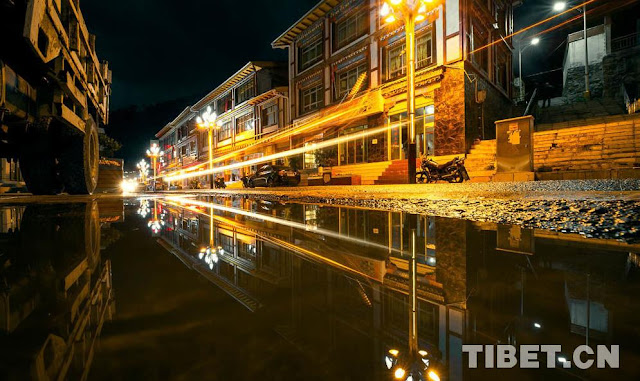 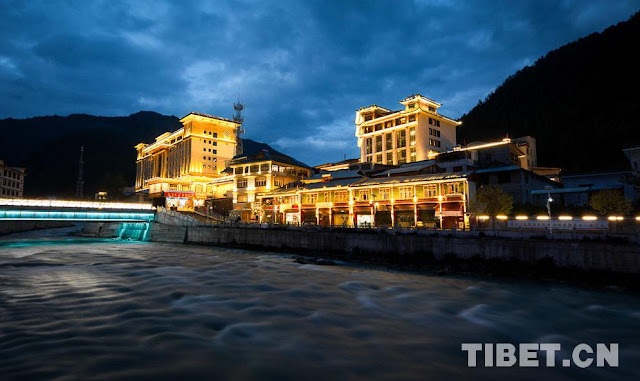 Have been reading your blogs each day ...they cover different aspects and cover them in detail...
It's a privilege to read this each day