China Global Television Network (CGTN) recently gave some insights on China's borders: “China has the longest land border in the world totaling more than 22,000 kilometers. Many of the border towns are diverse and share both Chinese and foreign characteristics.”

Chinese Characteristics in Tibet
The State TV mentioned Metok, “a border county of the Nyingchi City in southeast Tibet, sitting close to India. Due to its complex geographic and weather condition, Metok County is a paradise for adventure seekers.”
Metok is located a few kilometers, north of the Indian border (Tuting Circle of Siang District of Arunachal Pradesh); it is where the Yarlung Tsangpo enters India to become the Siang; it will be known as the Brahmaputra in Assam.
The Chinese TV continues: “Tourists would be amazed by the ecological environment in Metok County as it ranks first among all counties in China in terms of forest coverage, with a forest coverage rate of over 79.2 percent. Metok also boasts as many as 500 waterfalls with the famous ones include the U-shaped Waterfall, the Hanmi Waterfall and the Tiger`s Mouth Waterfall.”
Chinese tourists are strongly recommended to trek to the Yarlung Tsangpo Grand Canyon and Mount Namjagbarwa, ‘the father of glaciers’

China's Last County without Highway
Terming Metok as China's last county without a highway, the TV channel explains: “Local people used to deliver supplies only by manpower. The terrible weather conditions like snow and rainstorm have made the construction of mountain roads extremely difficult.”
The following description makes this border area sounds paradisiacal.

The New Tunnel bringing Prosperity
Three days after the first news item (on March 3),  Metok, the ‘hidden lotus’ (Metok simply means 'flower' in Tibetan), China Tibet News reminds its readers that on October 31, 2013, Metok Highway was opened: “The highway has not only promoted the communication between Metok and the outside, but also enhanced local economic growth.”
The official website argues: “With the access to highway, the local economy developed rapidly and villagers experienced tremendous improvement. Most Metok's farmers and herdsmen living outside wanted to move back to hometown and take part in promoting their hometown's economic development.”
That sounds good.

Relocation Scheme
The government of the Tibetan Autonomous Region (TAR) implemented “a moving back project involving 68 households, of which 65 were registered impoverished. People who planned to move back could work for the construction of relocation sites, which also expanded their employment channel. Besides, covering an area of 360 mu (24 hectares), tea plantation in relocation site would benefit 99 households, with an increase of 16,000 yuan RMB (US $ 250) in per capita income,” said the official website.
In other words, a new Xiaogang village, a scheme often mentioned on this blog.
Since April 2018, some 329 farmers and herdsmen had alreday moved into new houses: "With the improvement of economy and society, agriculture and animal husbandry industry have been developing rapidly in Metok County. Life has been getting better and better," said China Tibet News.
That’s good!
But…

Li Keqian on The Roof of the World
Remember, Premier Li Keqiang made an ‘inspection tour’ in Tibet, at the end of July last year. China Tibet Online reported that Chinese Premier Li Keqiang visited Southern Tibet on July 25.
Li went directly to Nyingchi (Nyingtri) Prefecture/City, bordering Arunachal Pradesh. He visited a village (Shiga village) in Mailing County of Nyingchi City; it is a new village inhabited by Monpas. According to the press release, the inhabitants of this ‘Monpa’ village have been recently relocated from 'impoverished areas'. The ‘impoverished’ region is Metok.
You must be lost by now.
One scheme to relocate poor Monpas to another Prefecture/City and another to bring ‘Monpas’ to a 'booming' Metok County!!
It does not sound logic.
In the 'relocated' village, the Premier went to the new house of a Tibetan named Kunsang.
The new house obviously look good.
Li Keqiang sat with the ‘migrant’ family and talked to the six members of the household about their daily life.
He asked: What is the main source of income? How much could you make in a year? What about your health care and children’s education? What kind of difficulties do you still have now? 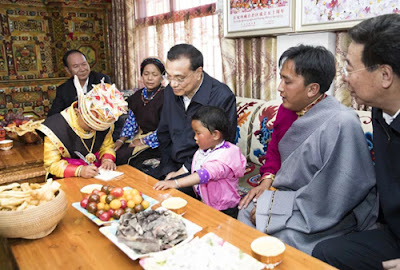 The Premier Li listened patiently to the answers of the villagers.
One Kunsang said that his family moved from Metok County, where “road travel is fairly difficult”.
Is it not surprising, considering that the TAR government is relocating people there to alleviate their poverty?
Where is the logic?
'Relocation' with Chinese characteristics?
Why to move people to a nearby County, if the situation has improved so much there that this particular place promotes 'return' of the villagers?
Why are some villagers taking away from Metok?
According to the official media, Kunsang told the Premier that his family has now an income of 150,000 yuan a year (US $ 2,400), thanks to farming and tourism. Further, the State “ensured health care service and children’s education program.” A total of 72 households is said to have shifted to the new village and 90% of families have similar income.
Li was said to have been really pleased “to see that the villagers have cast off poverty, through the relocation program and lived a prosperous life.”
The Premier wished the family an even more prosperous life in the future.

Another reason behind the relocation?
‘Poverty alleviation’ might not be the only reason; in a autocratic State, there is always the possibility of sieving the ‘bad’ guys and the ‘good’ guys.
The ‘bad’ ones are sent in safer places, further away from the border, while the ‘good’ ones are made the ‘The guardians of the sacred land and the builders of happy homes’.
Posted by Claude Arpi at 8:35 AM